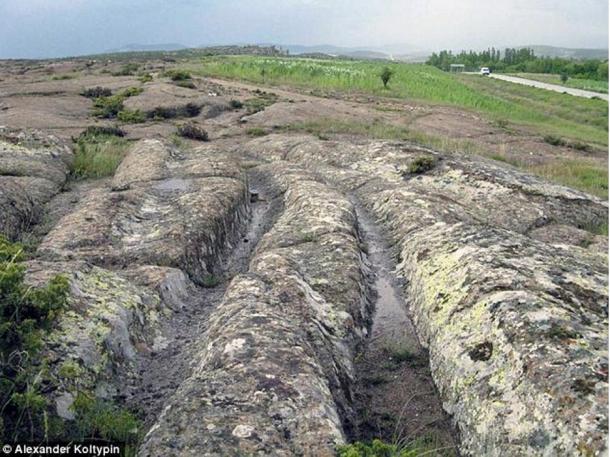 An ancient civilization drove massive all-terrain vehicles around Earth millions of years ago – and the traces are still visible today – a Russian university scholar claimed.

Dr. Alexander Koltypin a geologist believes that mysterious groove-like markings in the Phrygian Valley of central Turkey were made by an intelligent race between 12 and 14 million years ago.

Geologist  Dr. Alexander Koltypin said: It is supposed to be the old vehicles driven on soft soil on wheels, maybe a wet surface.

‘Because of their weight the ruts were so deep. And later these ruts – and all the surface around – just petrified and secured all the evidence.

‘Such cases are well known to geologists, for example, the footprints of dinosaurs were ‘naturally preserved’ in a similar way.’

Dr. Koltypin, director of the Natural Science Scientific Research Centre at Moscow’s International Independent Ecological-Political University has just returned from a field trip to the site in Anatolia with three colleagues. He described the markings as ‘petrified tracking ruts in rocky tuffaceous [made from compacted volcanic ash] deposits’.

He said: ‘All these rocky fields were covered with the ruts left some millions of years ago….we are not talking about human beings.’

The academic said: ‘We are dealing with some kind of cars or all-terrain vehicles. The pairs of ruts are crossing each other from time to time and some ruts are deeper than the others.’

According to his observations, ‘the view of the ruts leaves no doubt that they are ancient, in some places the surface suffered from weathering, cracks are seen here’. The age of the ruts is between 12 and 14 million years old, he believes.

‘The methodology of specifying the age of volcanic rocks is very well studied and worked out,’ he said.

‘As a geologist, I can certainly tell you that unknown antediluvian [pre-Biblical] all-terrain vehicles drove around Central Turkey some 12-to-14 million years ago.’ He claims archaeologists ‘avoid touching this matter’ because it will ‘ruin all their classic theories’.

He said: ‘I think we are seeing the signs of the civilisation which existed before the classic creation of this world.

‘Maybe the creatures of that pre-civilization were not like modern human beings. ‘

He claimed the ancient ‘car tracks’ are one of a number of clues ‘which prove the existence of ancient civilizations’ but which are often ignored by mainstream scientists. There was no comprehensible system for the tracks but the distance between each pair of tracks ‘is always the same,’ he said.

He added that the distance very much fits that between the wheels of modern cars, but the tracks are too deep for today’s vehicles.

‘The maximum depth of a rut is about three feet (one meter). On the sides of ruts, there can be seen horizontal scratches, it looks like they were left by the ends of the axles used for ancient wheels.

‘We found many ruts with such scratches,’ he said.

Koltypin graduated from the Russian State Geological Prospecting University and completed further studies at the Institute of Oceanology at the Russian Academy of Sciences.

More recently he has written books on popular science mysteries.