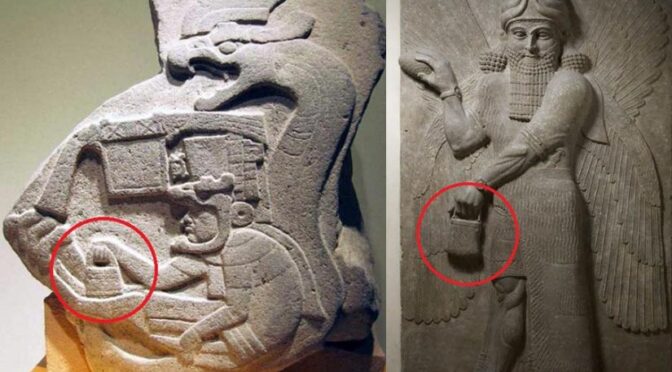 Many pieces of art found on cave walls dating back to the end of the Ice Age have resembled what is known today as a handbag or purse. The design persisted in ruins of ancient Turkish temples, Maori decorations of New Zealand, and crafts made by the Olmecs of Central America.

The ruins of Göbekli Tepe, dating back to about 11,000 BC are one of the earliest discoveries of the handbag.

But what the temple used for remains a mystery. Göbekli Tepe, a most ancient and Oldest temple complex. Many archaeologists suggest that the sanctuary held religious sacrifices, due to the butchered animal bones collected.

The walls and pillars throughout the temple are embellished with intricate carvings of animals, gods, mythical creatures, and three handbags.

An Answer Written in the Stars

The handbag is described to “typically feature a rounded handle-like top and a rectangular bottom and may include varying degrees of additional details of texture or pattern”.

Whether the images stand-alone or in the hand of a god or goddess-like creature, there are several theories out there to the meaning of this reoccurring object.

The most straightforward explanation is that of the cosmos. The semi-circle of the handbag, the straps, represents the hemisphere of the sky, while the square shape represents the earth.

Therefore the image is seen to represent the unification of both earth and sky, the tangible and intangible elements.

Then in New Zealand in an image of a hero who rose to the home of the gods and came back to earth “carrying three baskets of wisdom.” Finally, in ancient Egyptian hieroglyphs, the handbag-like image is seen frequently serving as a home for the gods and goddesses, similar to the Native American tepee.

The theme of the handbag appears to be a cosmological symbol that is often overlooked by the general public that means much more than what meets the eye.