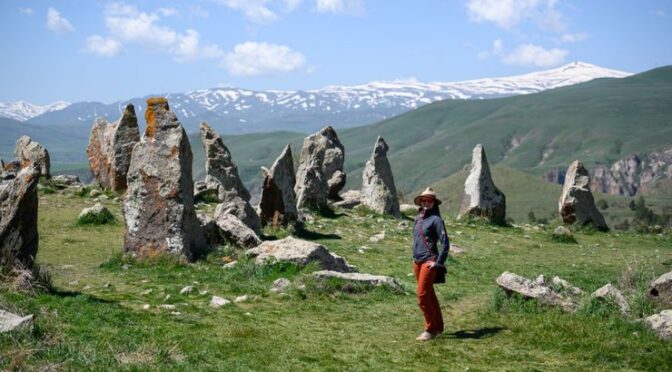 Opposing research institutes have agreed to set aside their disputes over the nature of the so-called ‘Armenian Stonehenge’ to solve its mysteries once and for all.

Made up of 223 stones, Carahunge has been argued to predate Wiltshire’s Stonehenge by 2,500 years — but its purpose has long been a bone of contention.

Although some archaeologists have argued that the prehistoric site was used as an astronomical observatory, others contend it was just a conventional settlement.

Members of the Bnorran Historic-Cultural NGO and the Armenian Institute of Archaeology and Ethnography co-signed an agreement on July 30 to collaborate in plumbing the mysteries of Carahunge, which lies near Sisian, in Armenia’s Syunik Province.

For the former group of researchers, the archaeological site — which some experts claim is 7,500 years old — represents the earliest-known observatory.

‘We think Carahunge — where more than 200 stones are located, with 80 having holes in them — is an ancient astronomical observatory,’ Bnorran board member Arevik Sargsyan told Armenpress.

This idea is partly based on the work of the physicist Paris Herouni, who had argued that the ancient complex dated back to around 5,500 BC.

Some of the stones, he suggested, had been deliberately positioned in order to align with Deneb, the brightest star in the constellation of Cygnus, along with the positions of the sun and the moon at certain times in the year.

‘According to another opinion, Carahunge isn’t an astronomical observatory,’ Ms. Sargsyan said.

For them, she added, ‘it is simply an ancient site, a settlement, which has a status of a mausoleum.’

In this theory, the stones form the structural remains of a city wall, in which the rocks supported piles of rubble and loam that have since been removed from the site.

This is the opinion held by researchers at the Institute of Archaeology and Ethnography, who have long disagreed with the astronomical interpretation of Ms. Sargsyan and her associates.

Furthermore, they noted, some of the holes in the stones — which are often cited as evidence in support of the site- have been an astronomical observatory — are located on the lower parts of the basalt rocks and thus do not even point at the stars.

For the moment, both academic groups have agreed on a temporary suspension of their excavations and research at the Carahunge site.

Investigations will resume once a jointly-held seminar of experts from various disciplines — including archaeologists, astronomers, and ethnographers — has been held to determine a shared research plan for the ancient stone feature.

‘It requires studies in all aspects,’ said Dr. Piliposyan, who argues that the site is unique across the whole Transcaucasia region

‘We discussed many issues during the signing of the agreement, we even considered that maybe in the future it will be possible to build a museum near the monument to display all materials regarding the ancient site.’