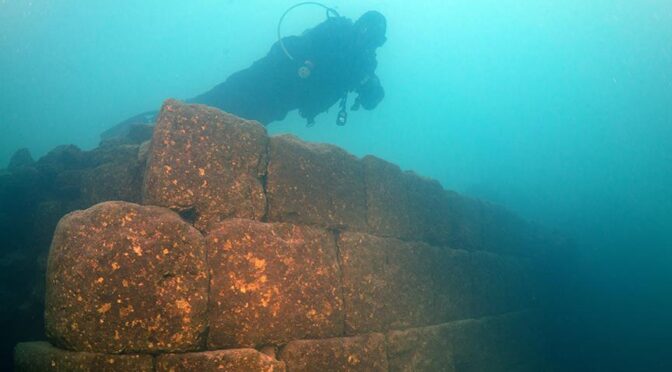 A Mysterious 3,000-Year-Old Castle Has Been Found Under a Lake in Turkey

A story describing the ruins of an ancient castle buried underneath the picturesque waters of Lake Van, Turkey, has been proclaimed entirely real.

The preserved ruins of a castle dating back more than 3,000 years to the Iron Age under the civilisation of Urartu have been found by archaeologists from Van Yüzüncü Yıl University.

Tahsin Ceylan, head of the dive team, told the Turkish Daily Saba that “There was a report that there was something under the water but most archaeologists and museum officials told us that we’re not going to find it.” Instead, Ceylan and his team ended up uncovering a massive fortress spanning a kilometre over the lakebed.

“Since the water of Lake Van is alkaline, the castle has not been damaged and has kept its characteristics underwater,” Ceyland added to the Hurriyet Daily News, referencing Van’s distinction as the largest sodium lake in the world.

“We have detected the castle’s exact location and photographed it and have made progress in our research. We now believe we have discovered a new area for archaeologists and historians to study.”

As shown in the video below, the fortress appears remarkably well preserved, with mortared rocks giving way to perfectly cut, smooth stone walls.

Visible sections span some 9 to 14 feet, with much of the rest buried under sediment.

A boon to archaeology and tourism

Lake Van has been subjected to dramatic rises and falls in water levels throughout much of its history.

Because the lake has no outlet, it is rich in sediment, with some layers estimated to be more than 1,300 feet.

This makes it extremely interesting to climate scientists, who estimate these sediments may contain the preserved climate history of the last 800,000 years.

According to Ceyland, the discovery of the submerged castle is not only a boon to the archaeological community, but also for tourists interested in learning more about the region’s rich history.

“Many civilizations and people had settled around Lake Van,” he said. “They named the lake the ‘upper sea’ and believed it had many mysterious things. With this belief in mind, we are working to reveal the lake’s ‘secrets.”