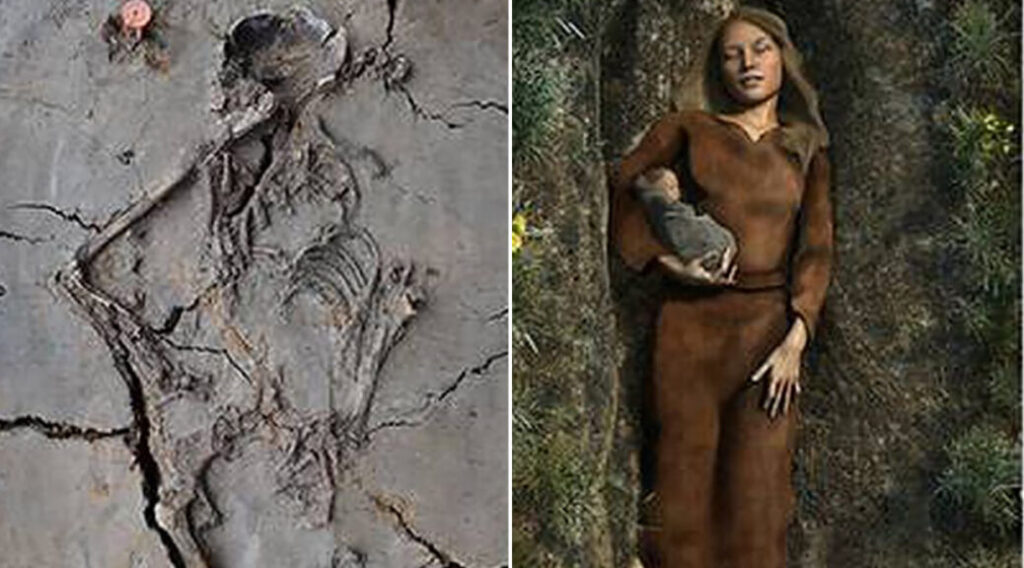 A 6,000-year-old baby with its teeth still intact and resting in the arms of a woman, believed to be its mother, has been found in a grave in the Netherlands.

Archaeologists said it was the oldest baby grave ever found in the Netherlands. The grave, uncovered at a site in Nieuwegein in the province of Utrecht, dates back to the Stone Age.

The discovery only came to light after four exhumed skeletons were examined by archaeological consultancy RAAP in Leiden.

Scientists noticed that the right arm of the 30-year-old woman’s skeleton was bent at a strange angle. It was crooked instead of straight – the usual posture of other skeletons at the site.

Closer inspection showed bone fragments of an infant by her arm and revealed that the woman was buried cradling a baby.

“The posture of the woman’s body did not conform to what we had found so far, that is, bodies whose limbs are placed parallel to the body. We then made the moving discovery that she was in fact cradling a little baby,” project leader Helle Molthof told Dutch broadcaster NOS.

The bone fragments sent for analysis included a tiny jaw holding several baby teeth. From this, scientists concluded that the infant had died when it was just a couple of months old.

“It really makes an impression when you find little baby teeth buried in clay for 6,000 years and see how similar they are to all those milk teeth that are kept in matchboxes by parents everywhere,” Molthof said.

DNA tests will reveal whether the woman was the infant’s mother as well as the sex of the baby.

Archaeologists hope that the grave will inform them about the burial ceremonies of the hunter-gatherer communities who lived along the banks of the River Vecht.

“We know how they lived, what sort of food they ate, what their houses were like but we don’t know very much yet about how they buried their dead and what happened to the children,” Molthof said.