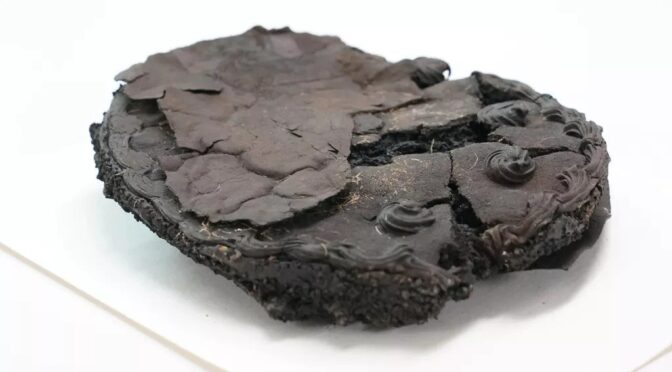 A cake baked 79 years ago has been found in the Old Town district of the city of Lübeck, which is located near the coast of northern Germany, according to a Live Science report.

Though the charred delicacy hasn’t been edible for a very, very long time, it’s still recognizable as a cake, representatives of the Hanseatic City of Lübeck said in a statement.

The cake’s overall shape, nut fillings, details in the sugar icing decorations and even its wax-paper wrappings remained intact after the pastry was burned into a crisp, cake-shaped charcoal briquette during a World War II air raid.

Archaeologists have previously discovered the burnt remains of long-ago meals, but they rarely find food that’s a whole and well-preserved as this cake was, according to the statement. It offers a glimpse into a dark moment in Germany’s history and illuminates the fragility of life during wartime, Lübeck representatives said.

On the night of March 28, 1942 (and into the early morning hours of March 29), the British Royal Air Force bombed Lübeck, a historic city and a nonmilitary target, in retaliation for the Nazi blitz of Coventry, England, in 1940, said Dirk Rieger, head of the Department of Archaeology for the Hanseatic City of Lübeck Historic Monuments Protection Authority.

The nut-filled cake had recently been unwrapped when the bombs landed, and all of the building’s stories collapsed into the cellar, Rieger told Live Science. Somehow, the cake escaped being crushed, and the intense heat of the flames rapidly scorched and carbonized the confection amid the wreckage.

Founded in 1143, Lübeck is one of the best-preserved medieval urban sites in northern Europe, according to the United Nations Educational, Scientific and Cultural Organization (UNESCO), which added Lübeck to its World Heritage List of protected sites in 1987.

From 1230 until 1535, Lübeck — a port city on the Baltic Sea — served as the capital of an international merchants’ organization known as the Hanseatic League, and much of the city’s extraordinary medieval architecture remains intact to this day, UNESCO says.

Artefacts and other remains deep underneath the buildings, in Lübeck’s sediments, are also exceptionally well preserved, Rieger said.

“The subsoil is made of clay, so the preservation for organic material is awesome,” he explained. “You dig down like 7 meters [23 feet], and you are in the 1100s.

We have every single feature of urban and mercantile activity throughout eight or nine centuries, which is absolutely unique in the way it’s been preserved.”

To date, more than 4 million objects have been recovered from excavations around Lübeck — “everything from tiny children’s shoes to whole medieval ships,” Rieger said.

Workers found the cake in April during infrastructure work in Lübeck’s Old Town district, “close to the town hall and the main market area,” Rieger said. In the ruined parts of the city that the British had bombed, “the town left the cellars within the soil and built new houses on top of them,” he said. Because of Lübeck’s important historic status, archaeologists supervise all of the city’s construction work.

Experts were already present when the workers opened the cellar and discovered the blackened cake, along with plates, knives, spoons and vinyl records that included Beethoven’s “Moonlight Sonata,” according to the statement.

Scientists brought the cake to the city’s restoration laboratory, where conservators carefully cleaned it with delicate picks, brushes and vacuums, and then collected samples to identify the nutty filling, Rieger said. But their work to preserve the rare carbonized confection has just begun.

Bombs that the British Royal Air Force dropped on Lübeck contained incendiary chemicals, such as phosphorus, and the archaeologists need to make sure that there are no traces of such materials on the cake that could react when exposed to chemicals used in the preservation of valuable artefacts.

“This cake is like a window into 80 years ago,” Rieger said, and the view is bittersweet. When the cake is finally ready for public display and people can peer through that window, “they will hopefully see not only the destruction of the war but also the joy that people had,” he added.