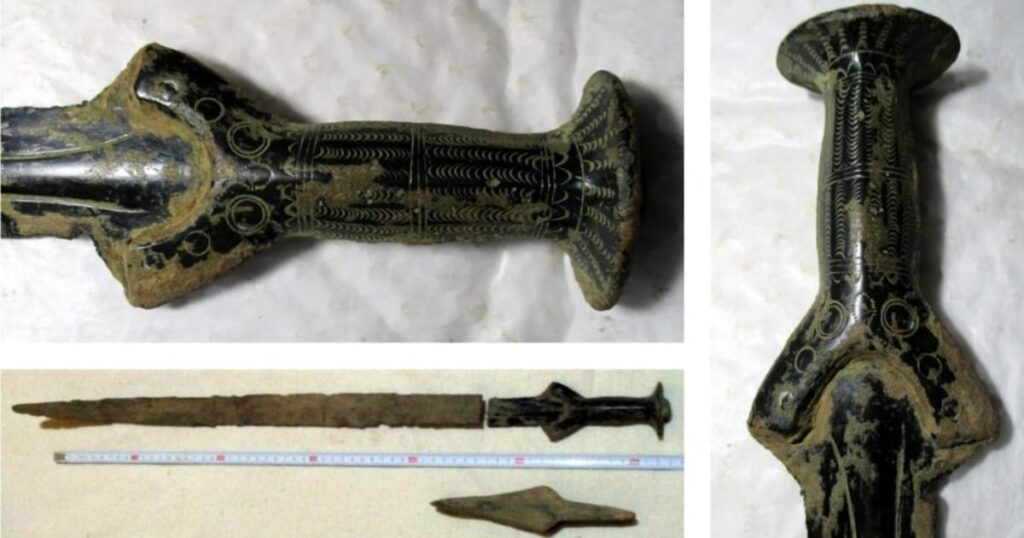 A man hunting for mushrooms found came away with more than just a bunch of fungus – he discovered two rare Bronze Age weapons. Roman Novák was foraging for fungi after a rainstorm in Jesenick, a small town about 150 miles from Prague when he noticed a piece of metal jutting out of the ground.

Examining it closer, Novák realized it was part of a sword, dating back some 3,300 years ago.

Digging some more, he also uncovered a bronze axe from the same era nearby. The discovery has led local archaeologists to plan an excavation in the area.

‘It had just rained and I went mushroom-picking,’ Novák told Radio Prague International. As I went, I saw a piece of metal sticking out of some stones. I kicked it and found that it was a blade, part of a sword.’

Archaeologists who examined both pieces say they date to about 1300 BC when Central Europe’s Urnfield culture was just emerging and Jeseník would have been sparsely populated.

Unlike later iron swords, which are hammered into shape while still red hot, bronze swords were made by heating the metal until it turned into a liquid and then pouring it into a mould.

The sword has an octagonal handle, with a bronze hilt intricately carved with circles and crescents. The blade, which is broken near the base but otherwise intact, resemble weapons used mainly in what is now Northern Germany.

‘They were obviously trying their best, but the quality of the casting was actually pretty low,’ said Jiří Juchelka, director of archaeology at the nearby Silesian Museum. ‘X-ray tests show that there are many small bubbles inside the weapon.’

Because of that, Juchelka believes the sword was more ceremonial than something used in combat.

Nevertheless, it’s only the second of its kind found in the region.

‘It is like a puzzle,’ said Milan Rychlý of Jesenick’s Ethnographic Museum. ‘We just have four little shards from the story that took place right now, so we have to start piecing everything together.’

When the excavation of the area is complete, all the items will go on display at the two museums.

Mushroom picking after it rains is a popular hobby in Eastern Europe: Last month a man foraging in north-central Poland literally stumbled across a trove of 17th-century silver coins.

Bogusław Rumiński’s bike got stuck in a rut while he was riding in his tiny village of Jezuicka Struga.

When he put his hands out to stop his fall, Rumiński landed on dozens of silver pieces dating to the reign of King John II Casimir Vasa. The coins, which are in excellent condition, were minted between 1657 and 1667, shortly after the Deluge, an era of frequent wars involving Russia, Poland and Sweden.

Later searching with a metal detector turned up even more coins, bringing the total to 86. Because of the coins’ fine condition, experts believe they were hidden shortly after being produced.