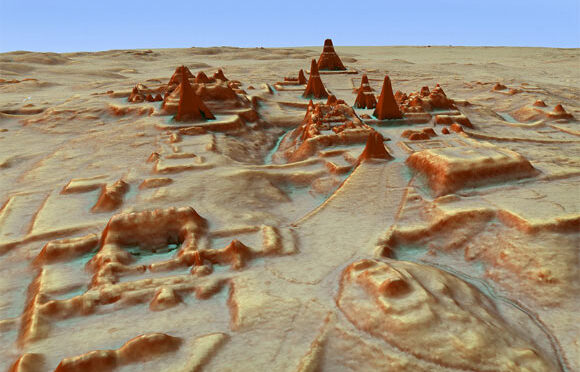 Their findings show that the region’s pre-Columbian civilization was “far more complex and interconnected than most Maya specialists had supposed,” according to National Geographic.

Based on the data, researchers believe that the region supported an advanced civilization on par with that of ancient Greece or China, rather than a series of isolated city-states.

Tulane University archaeologist Francisco Estrada-Belli says that the surveys reveal that the region was far more densely populated than previously thought: “it’s no longer unreasonable to think that there were 10 to 15 million people there,” even in areas that were thought to be uninhabitable.

Archaeologists will now study the data to refine their understandings of the region’s inhabitants. The surveys found more than just ancient structures: they found evidence of pits from modern-day looters.

LiDAR mapping has proven to be a useful tool for archaeologists in recent years, who have used the technology to penetrate the dense rainforests of South America to reveal human-made structures that have long been hidden.

Aircraft-mounted LiDAR sensors shoot lasers into the ground, which bounce back once they hit an object. While the lasers hit tree leaves and vegetation, they also hit the ground.

Once scientists peel back the forest canopy and underbrush, they’re left with detailed images of the ground.

Last year, author Douglas Preston detailed an expedition to Honduras in his book The Lost City of the Monkey God, where archaeologists used LiDAR to uncover a pair of ancient cities in the middle of an impenetrable rainforest.

This project is just the first phase of a three-year project that’s expected to survey 5,000 square miles of the region.

According to Ars Technica, researchers on the project will be submitting their findings to papers soon, but they will be revealing some of their work in an upcoming National Geographic special.