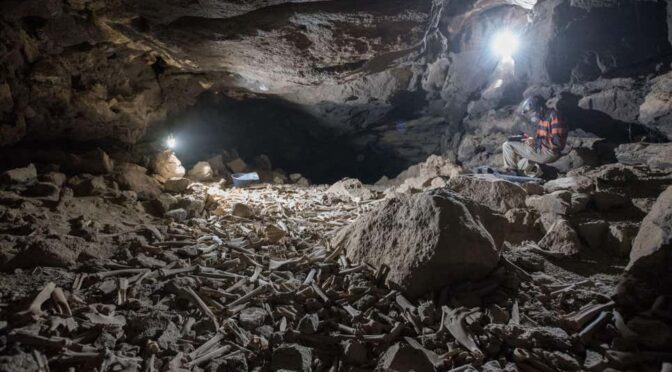 Although hyenas look and hunt like canines, they’re members of the mongoose family and therefore more closely related to a cat. However, just like dogs, hyenas have an affinity for hiding bones — it’s just that they can tend to go a bit overboard.

Case in point, archaeologists were left speechless after they stumbled across a lava tube cavern in northwestern Saudi Arabia that is packed with hundreds of thousands of bones gathered by striped hyenas over the course of 7,000 years.

The gruesome floor filled with ancient animal bones was found deep in a lava tube system — a network of caverns carved by lava flow. The site, known as Umm Jirsan, was discovered in 2007, but it was only recently that researchers ventured deep into the dark caverns.

Mathew Stewart, a zooarchaeologist at the Max Planck Institute for the Science of Human History in Germany, led a team of researchers who catalogued nearly 2,000 bones and teeth belonging to at least 14 different species, including cattle, horses, camels, rodents, and even humans.

Hundreds of thousands of other bones that are yet to be analyzed still lie on the cavernous floor.

Radiocarbon dating of the samples suggests the animal remains range from 439 to 6,839 years ago, which can only mean these lava tubes had been used as dens for at least 6,000 years.

The striped hyena (Hyaena hyaena) is a bit smaller than spotted and brown hyenas. They have a broad head with dark eyes, a thick muzzle, and large, pointed ears, with a mane of long hair growing along the back.

Their most striking feature is the legs: the front legs are much longer than the hind legs. This gives hyenas their distinctive walk, making them seem like they’re always limping uphill.

Hyenas are nocturnal or crepuscular predators that stay out of sight during the day, preferably in a natural cave or a burrow dug into the hillside. Sometimes they may take over the dens of other creatures where they transport bones to be eaten, fed to the young, or cached for later use.

It’s a well-established fact that hyena dens aren’t tidy at all, being normal to find leftover bones scattered across the floor. However, the lava tube horde stunned even the researchers who were most familiar with the hyenas.

Although they didn’t find hyenas at the site, the researchers are certain this was one of their dens judging from the cuts, bites, and digestion marks left on the bones.

The presence of human skull fragments was also telling of hyena presence since the animals are known to scavenge through burial grounds in search of food. They normally will consume everything except for the top of the skull.

“The size and composition of the bone accumulation, as well as the presence of hyena skeletal remains and coprolites, suggest that the assemblage was primarily accumulated by striped hyena (Hyaena hyaena),” the authors wrote in a study published in the journal Archaeological and Anthropological Sciences.

It’s highly unlikely that the six skullcaps with gnaw marks on them found at the site belong to humans who were killed by a hyena hunting party.

The mammals are mostly scavengers but when they do hunt they prefer to target hares, birds, and antelopes. However, the possibility that some hunter-gatherers were killed by hyena packs cannot be entirely ruled out.

Today, striped hyenas are a threatened species in Saudia Arabia but thousands of years ago they were common across the Arabian Peninsula.

The current investigation at Umm Jirsan was undertaken as part of the Paleo deserts Project, a large-scale research initiative aimed at tracking environmental and climate change in the Arabian Desert region over the past one million years.

Of particular interest is how human and animal migration in the region waxed and waned with the changing climate. This is a challenging goal since the unforgiving desert climate in the region tends to destroy any exposed organic matter.  Luckily, the Umm Jirsan lava tubes create a perfect time capsule that will give scientists material to work with for years to come.