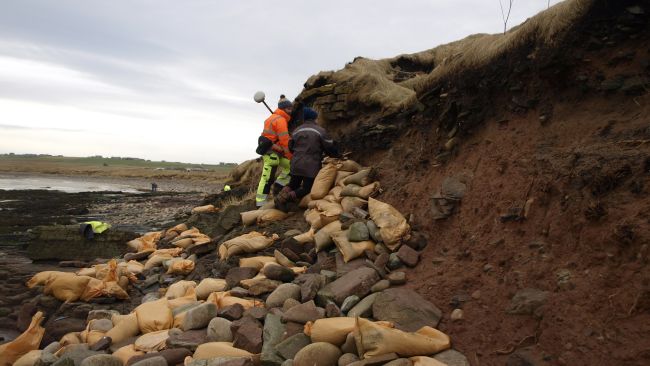 The native Picts, a Celtic-language speaking tribe, once populated the Scottish Islands, similar to the natives that live on what is now Scotland.

Several powerful storms on Scotland’s Orkney Islands have now revealed ancient human remains in a Pictish and Viking cemetery dated back to about 1,500 years ago.

To order to protect the damage to the former Newark Bay cemetery on Orkney’s largest island, volunteers are now placing sandbags and clay around. The site dates from the middle of the sixth century when ancient Pictish people inhabited the Orkney Islands.

The cemetery was used for about 1,000 years, and numerous burials from the ninth to the 15th century were Norsemen or Vikings who had seized the Orkney Islands from the Picts. Now, storm waves are destroying the low cliff where the ancient site is located, Peter Higgins from the Orkney Research Center for Archaeology (ORCA), said.

“Every time we have a storm with a bit of a south-easterly [wind], it really gets in there and actively erodes what is just soft sandstone,” Higgins explained.

Approximately 250 skeletons were taken out of the cemetery about 50 years ago, but researchers do not know how far the site extends from the beach. They believe that hundreds of Pictish and Norse bodies are still buried there.

“The local residents and the landowner have been quite concerned about what’s left of the cemetery being eroded by the sea,” Higgins said.

Uncovered bones are usually either coated with clay to protect them or removed from the site after their positions are thoroughly labelled, so it is rather unusual for bones to end up on the beach, he explained.

Researchers do not know yet of the exposed bones belong to Picts or Vikings, as no burial objects or funeral clothes were spotted, and the bodies were buried four of five layers under the surface.

Historians claim that the first Norse immigrants to the Orkney Islands were established there in the late eighth century, leaving a rising new monarchy in Norway. They used the Orkney Islands to begin their own voyages and Viking raids, and ultimately, all the islands were ruled by the Norse, according to The Scotsman.

The relationship between the Picts and the Norse on the Orkney Islands is highly argued by scholars. They cannot know for sure whether the Norse took over by force, or were settlers who traded and entered marriage with the Picts. However, now, the ancient cemetery at Newark Bay may help researchers answer their questions.

“The Orkney Islands were Pictish, and then they became Norse,” Higgins said. “We’re not really clear how that transition happened, whether it was an invasion, or people lived together. This is one of the few opportunities we’ve got to investigate that.”

A part of the scientific work on the remains would require testing genetic material from the ancient bones, which might demonstrate that some people living on the Orkney Islands today are successors of people who lived there more than 1,000 years ago.

“We’re fairly confident that we’re going to find that some local residents are related to people in the cemetery,” Higgins said.