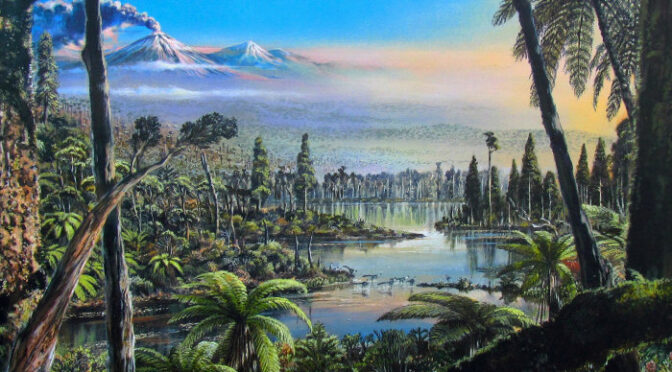 According to fossil roots, pollen, and spores recently found in West Antarctica, a thriving temperate rainforest existed around 90 million years ago.

The world was a different place back then. During the middle of the Cretaceous period (145 million to 65 million years ago), dinosaurs roamed Earth and sea levels were 558 feet (170 meters) higher than they are today. Sea-surface temperatures in the tropics were as hot as 95 degrees Fahrenheit (35 degrees Celsius).

This scorching climate allowed a rainforest — similar to those seen in New Zealand today — to take root in Antarctica, the researchers said.

The rainforest’s remains were discovered under the ice in a sediment core that a team of international researchers collected from a seabed near Pine Island Glacier in West Antarctica in 2017.

As soon as the team saw the core, they knew they had something unusual. The layer that had formed about 90 million years ago was a different colour. “It clearly differed from the layers above it,” study lead researcher Johann Klages, a geologist at the Alfred Wegener Institute Helmholtz Centre for Polar and Marine Research in Bremerhaven, Germany, said in a statement.

Back at the lab, the team put the core into a CT (computed tomography) scanner. The resulting digital image showed a dense network of roots throughout the entire soil layer. The dirt also revealed ancient pollen, spores and the remnants of flowering plants from the Cretaceous period.

By analyzing the pollen and spores, study co-researcher Ulrich Salzmann, a paleoecologist at Northumbria University in England, was able to reconstruct West Antarctica’s 90 million-year-old vegetation and climate.

“The numerous plant remains indicate that the coast of West Antarctica was, back then, a dense temperate, swampy forest, similar to the forests found in New Zealand today,” Salzmann said in the statement.

The sediment core revealed that during the mid-Cretaceous, West Antarctica had a mild climate, with an annual mean air temperature of about 54 F (12 C), similar to that of Seattle. Summer temperatures were warmer, with an average of 66 F (19 C). In rivers and swamps, the water would have reached up to 68 F (20 C).

In addition, the rainfall back then was comparable to the rainfall of Wales, England, today, the researchers found.

These temperatures are impressively warm, given that Antarctica had a four-month polar night, meaning that a third of every year had no life-giving sunlight.

However, the world was warmer back then, in part, because the carbon dioxide concentration in the atmosphere was high — even higher than previously thought, according to the analysis of the sediment core, the researchers said.

“Before our study, the general assumption was that the global carbon dioxide concentration in the Cretaceous was roughly 1,000 ppm [parts per million],” study co-researcher Gerrit Lohmann, a climate modeller at Alfred Wegener Institute, said in the statement. “But in our model-based experiments, it took concentration levels of 1,120 to 1,680 ppm to reach the average temperatures back then in the Antarctic.”

These findings show how potent greenhouse gases like carbon dioxide can cause temperatures to skyrocket, so much so that today’s freezing West Antarctica once hosted a rainforest. Moreover, it shows how important the cooling effects of today’s ice sheets are, the researchers said.