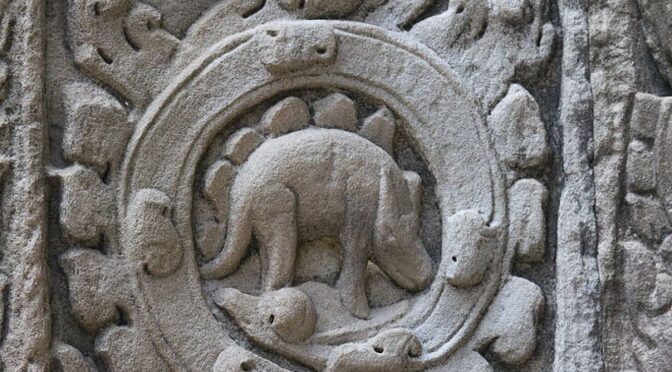 There are carvings found in the Angkor Wat temples that seem to resemble dinosaurs.

By the time our ape ancestors split from the line that would produce chimpanzees, which happened about 4 million to 7 million years ago, non-avian dinosaurs had been extinct for more than 58 million years.

Birds, the descendants of one group of small theropod dinosaurs, are the only dinosaurs that survived the end-Cretaceous mass extinction.

There are a number of people who reject the scientific view, however, and insist that humans and dinosaurs once lived together within the last 10,000 years or so.

These “young Earth creationists” twist Biblical passages to support their view that Tyrannosaurus rex lived peacefully in the Garden of Eden. They also supplement their beliefs with some rather spurious evidence—like a carving found on a Cambodian temple.

It is not known precisely when the carving was first noticed, but during the past several years, creationist groups have been a-twitter about a supposed carving of a Stegosaurus on the popular Ta Prohm temple in Cambodia. (The story recently reappeared on the “All News Web” site, an internet tabloid that specializes in tales of UFOs and other humbugs.) Since the temple was built around the end of the 12th century, some take this bas relief to suggest that Stegosaurus, or something Stegosaurus-like, survived until a few hundred years ago.

While certainly not proving their view that dinosaurs and humans were created together less than 10,000 years ago, it is consistent with their beliefs and is a favourite piece of evidence among creationists.

There is a substantial problem, however. Not only does creationism distort nature to fit a narrow theological view, but there is also no evidence that the carving in question is of a dinosaur.

If you look at the carving quickly and at an angle, yes, it does superficially look like a Stegosaurus than a kindergartener made out of play-doh.

As anyone who has spent time watching the clouds go by knows, though, an active imagination can turn something plain into something fantastic. If viewed directly, the carving hardly looks Stegosaurus-like at all. The head is large and appears to have large ears and a horn.

The “plates” along the back more closely resemble leaves, and the sculpture is a better match for a boar or rhinoceros against a leafy background.

Even so, the sculpture only vaguely looks like a rhino or boar. We can be certain that it is not a representation of a living Stegosaurus, but could it be a more recent attempt at depicting a dinosaur? Indeed, it is quite possible that this carving has been fabricated.

There are many sculptures at the temple, and the origin of the carving in question is unknown.

There are rumours that it was created recently, perhaps by a visiting movie crew (the temple is a favourite locale for filmmakers), and it is possible that someone created something Stegosaurus-like during the past few years as a joke.

Either way, the temple carving can in no way be used as evidence that humans and non-avian dinosaurs coexisted.

Fossils have inspired some myths (see Adrienne Mayor’s excellent book The First Fossil Hunters), but close scrutiny of geological layers, reliable radiometric dating techniques, the lack of dinosaur fossils in strata younger than the Cretaceous, and other lines of evidence all confirm that non-avian dinosaurs became extinct tens of millions of years before there was any type of culture that could have recorded what they looked like.

As scientist Carl Sagan said, “extraordinary claims require extraordinary evidence”, and in the case of modern dinosaurs the evidence just isn’t there.