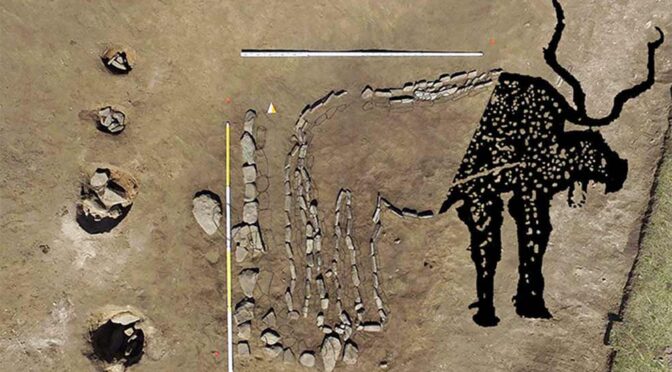 A geoglyph of a bull discovered in Siberia dates back more than 4,000 years, making it twice as old as the famed Nazca lines of Peru and millennia older than Uffington’s chalk-lined White Horse.

Geoglyphs, which often have spiritual or religious meaning, are large designs made in the ground that can typically only be seen from the air.  The bull, which measures 10 feet tall by 13 feet long, is formed from carefully arranged pebbles and sandstone.

It was part of a larger Early Bronze Age burial site uncovered near Khondergey, a village in southwest Tuva close to Russia’s border with Mongolia.

This is the first animal geoglyph found in this part of Central Asia, according to archaeologists at the Russian Academy of Sciences’ Institute of the History of Material Culture, who participated in the discovery.

‘The bull motif is very typical for the Central Asia cultures of the Early Bronze Era,’ Marina Kilunovskaya, head of Tuva Archaeological Expedition, told The Siberian Times. ‘Later in the Scythian era, bulls were replaced by deers.’

Kilunovskaya said petroglyphs, or rock carvings, of bulls, have been discovered in Tuva and the surrounding regions before but this is the first animal geoglyph.

‘We didn’t previously find such stone compositions.’ she told the Times.

Only the back half of the bovine remains—its front was destroyed by road construction in the 1940s. Members of the expedition hope the bull’s rear will be better preserved.

Geoglyphs have been discovered in diverse corners of the world: In addition to the Nazca Lines in Peru and Uffington’s White Horse in England, the Blythe Intaglios are a group of gigantic figures carved into the ground in the Colorado Desert near Blythe, California, that have been radiocarbon-dated to between 900 and 1200 BC.

The Cerne Abbas Giant in Dorset, England, is a 180-foot tall nude male figure with a prominent erection and large club. The phallic figure’s outline was made by digging two-foot deep trenches into the ground and filling it with crushed chalk.

Dates for when it was carved have ranged from the Middle Ages to the 17th century, but using optically stimulated luminescence,  scientists have placed it much further back, somewhere between  700 1110 AD.

The oldest known geoglyph is also in Russia, though some 1,100 miles away from the Tuva bull: An enormous moose only clearly visible from the sky in Chelyabinsk dates to about 6,000 years ago.

The moose, sometimes labelled an elk, was incised on the Zyuratkul Mountains. It stretches for about 902 feet and depicts an animal with four legs, antlers, and a long muzzle.

Only discovered in 2011 using satellite imaging, the moose is also the largest-known figurative geoglyph, as opposed to an abstract or geometric design.

Stone tools uncovered by archaeologists at the site show indicate were made to fit the hands of children, who partook in the glyph’s creation.

‘But it was not a kind of slave labour of children,’ Stanislav Grigoryev, a senior researcher from the Chelyabinsk History and Archaeology Institute, told The Siberian Times. ‘They were involved to share common values, to join something important to all the people.’

In 2014, dozens of 50 geoglyphs of various shapes and sizes, including a massive swastika, were discovered across northern Kazakhstan.