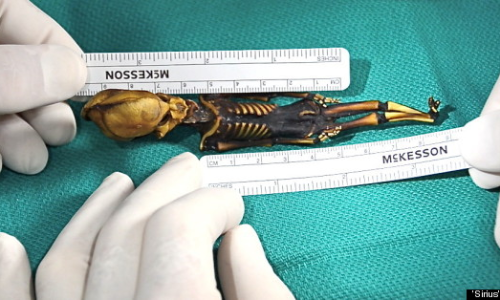 A Stanford University scientist who boldly entered the fray has now put to rest doubts about what species Ata belongs to. But the mystery is not over.

The story began 10 years ago when the diminutive remains were reportedly found in a pouch in a ghost town in the Atacama Desert of Chile. Ata ended up in a private collection in Barcelona; producers of the film Sirius latched onto the bizarre mummy as evidence of alien life.

Last fall, immunologist Garry Nolan, director of the National Heart, Lung, and Blood Institute’s Proteomics Center for Systems Immunology at Stanford in California, heard about Ata from a friend and contacted the filmmakers, offering to give them a scientific readout on the specimen. They asked him to give it a shot.

Among the apparent abnormalities, Ata sports 10 ribs instead of the usual 12 and a severely misshapen skull. “I asked our neonatal care unit how you would go about analyzing it. Had they seen this kind of syndrome before?” Nolan says. He was directed to pediatric radiologist Ralph Lachman, co-director of the International Skeletal Dysplasia Registry at Cedars-Sinai Medical Center in Los Angeles, California.

“He literally wrote the book on pediatric bone disorders,” Nolan says. Lachman was blown away, Nolan recalls: “He said, ‘Wow, this is like nothing I’ve ever seen before.’ “

To study the specimen, Nolan sought clues in Ata’s genome. He initially presumed the specimen was tens or hundreds of thousands of years old—the Atacama Desert may be the driest spot on the planet, so Ata could have been preserved for aeons.

He consulted experts who had extracted DNA from bones of the Denisovans, an Asian relative of European Stone Age Neandertals. It turned out that their protocols weren’t necessary. “The DNA was modern, abundant, and high quality,” he says, indicating that the specimen is probably a few decades old.

To the chagrin of UFO hunters, Ata is decidedly of this world. After mapping more than 500 million reads to a reference human genome, equating to 17.7-fold coverage of the genome, Nolan concluded that Ata “is human, there’s no doubt about it.” Moreover, the specimen’s B2 haplotype—a category of mitochondrial DNA—reveals that its mother was from the west coast of South America: Chile, that is.

Meanwhile, after examining x-rays, Lachman concluded that Aka’s skeletal development, based on the density of the epiphyseal plates of the knees (growth plates at the end of long bones found only in children), surprisingly appears to be equivalent to that of a 6- to 8-year-old child. If that holds up, there are two possibilities, Nolan says. One, a long shot, is that Ata had a severe form of dwarfism, was actually born as a tiny human, and lived until that calendar age.

To test that hypothesis, he will try to extract haemoglobin from the specimen’s bone marrow and compare the relative amounts of fetal versus adult haemoglobin proteins.

The second possibility is that Ata, the size of a 22-week-old fetus, suffered from a severe form of the rare rapid ageing disease, progeria, and died in the womb or after premature birth.

Nolan hasn’t yet turned up hits for genes known to be associated with progeria or dwarfism. He’s stepping up the search for mutations through additional sequencing and casting a wider net.

Another possibility is a teratogen: a birth defect-inducing toxicant along the lines of thalidomide. Nolan plans to analyze tissue using mass spectrometry to look for toxicants or metabolites. But reports of a handful of other Tom Thumb-sized skeletons from Russia and elsewhere have Nolan leaning toward a genetic explanation.

At least one expert has a more prosaic take—but agrees that the specimen is human. “This looks to me like a badly desiccated and mummified human fetus or premature stillbirth,” says William Jungers, a paleoanthropologist and anatomist at Stony Brook University Medical Center in New York.

He notes that “barely ossified and immature elements” of the hands and feet, and the wide-open metopic suture, where the two frontal bones of the skull come together down the middle of the forehead.

“Genetic anomalies are not evident, probably because there aren’t any,” he says. Nolan responds that the rib number and epiphyseal plate densities remain a riddle; while he is open to the fetus hypothesis, he thinks that the jury is still out.

Nolan’s analysis went viral; besieged as he has been by the media circus, he doesn’t regret having gotten involved in debunking a claim of alien life. “I’m thrilled with the outcome,” he says.

Once the analyses are complete, he says, he’ll submit his findings for peer review. The other claim Nolan debunks is that Ata is an elaborate hoax. The x-rays clearly show these are real bones, complete with arterial shadows, he says. “You just couldn’t fake it,” he says, adding, with a laugh, “unless you were an alien.”