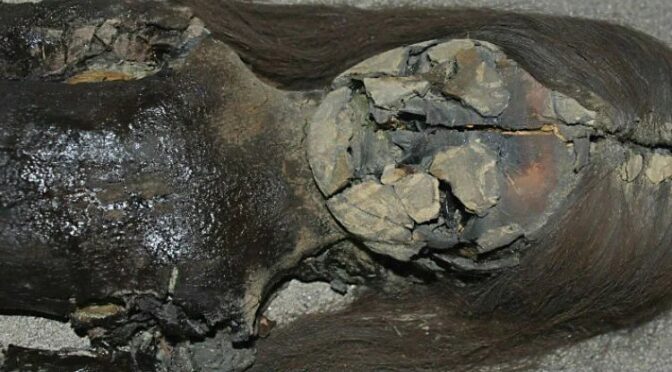 The Oldest Mummies in The World Are Turning Into Black Slime

Climate change is converting the world’s oldest mummies into black slime, which were buried more than 7,000 years ago in the arid desert of northern Chile. Increasing humidity has been observed to cause an outbreak of bacteria living on the preserved skin of Chinchorro mummies, according to scientists.

The bacteria then feeds on the ancient skin, causing it to break down into black slime. Researchers say that rising humidity levels in Arica, Chile, is putting the 120 Chinchorro mummies at the University of Tarapacá’s archaeological museum at risk.

However, they warn that hundreds of other mummies buried just beneath the sandy surface in the valleys throughout the region are also under threat. Professor Marcela Sepulveda, an archaeologist at the University of Tarapacá, said: ‘In the last 10 years, the process has accelerated.

‘It is very important to get more information about what’s causing this and to get the university and national government to do what’s necessary to preserve the Chinchorro mummies for the future.’

The Chinchorro mummies are in some cases nearly 4,000 years older than those found preserved from ancient Egypt. The oldest mummy discovered in the Atacama desert dates to 7020BC while the oldest in Egypt dates to 3,000BC.

However, the practice of preserving the dead with mummification became popular among the Chinchoro around 5,000 BC, with children and babies often being the most elaborately preserved. The Chinchorro were prehistoric people who lived in scattered communities and used fishing to help them survive on the desert coast of Chile and Peru.

It is thought they began preserving their dead though mummification as part of a religious act designed to bridge the world between the living and the dead.

An estimated 282 mummies have now been recovered from the dry, sandy soil in the region, but scientists say there could be hundreds more buried there.

Preserved corpses are often found as the shifting sand exposes their bodies. Arica and the surrounding Atacama Desert is one of the driest places in the world and the town receives less than 0.02 inches of rain a year.

It is this dry climate that has helped preserve the mummies for more than 7,000 years. However, the region has been growing slowly damper in recent years.

Scientists at the University of Tarapacá museum first noticed black slimy patches appearing on the preserved skin of the Chinchorro mummies around ten years ago.

As time has gone on they have degraded at ‘an alarming rate’ as the preserved skin has broken down into black slime.

Researchers at Harvard School of Engineering and Applied Sciences have now conducted a series of tests to find out what was causing the degradation. They found that bacteria normally found growing on the human skin appeared to become ‘supercharged’ when placed on mummy skin in high humidity.

They found that mummies need to be kept at between 40 per cent and 60 per cent humidity to prevent degradation from occurring. If the humidity falls below this level, acidification could also damage the mummies.

Museum staff are now fine-tuning the temperature and humidity to help preserve the mummies in their extensive collection. Professor Ralph Mitchell, a biologist at Harvard who led the work, said: ‘We knew the mummies were degrading but nobody understood why.

‘This kind of degradation has never been studied before.

‘With many diseases we encounter, the microbe is in our body, to begin with, but when the environment changes it becomes an opportunist.’

Professor Mitchell and his colleagues are now keen to find ways to help protect the mummies still preserved out in the desert.