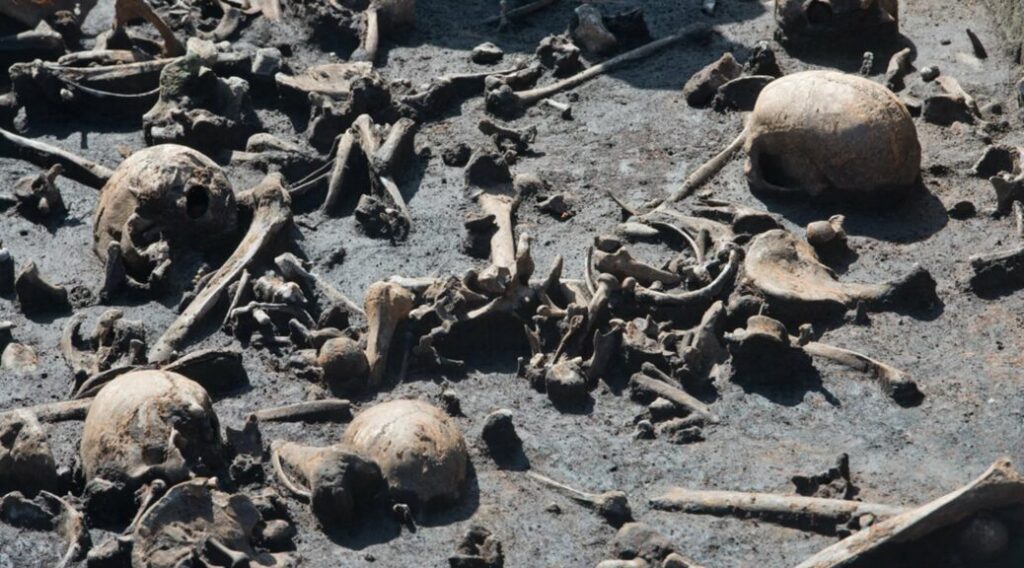 Europe’s Oldest Battlefield Yields Clues to Fighters’ Identities: It was one of the biggest and most brutal battles in the Bronze Age. Now archaeologist has shed new light on the mysterious people who fought in the Tollense Valley 3,250 years ago.

A study of the skeletons at the sites in north-eastern Germany suggests that more than 2000 people were involved in the battle. And while experts are yet to pinpoint exactly where the fighters were from, DNA analysis suggests that it was a large, diverse group of non-local warriors.

The reason for the war on Europes oldest battlefield remains unknown. Since the 1980s, several pieces of evidence of a battle have been discovered in river sediment at the site, including daggers, knives, and skulls.

In 1996, an amateur archaeologist found a single upper arm bone sticking out of the steep riverbank with a flint arrowhead embedded in one end of the bone.

A systematic exploration of the site began in 2007 after archaeologists unearthed an enormous battlefield, as well as 140 skeletons and remains of military equipment.

These included wooden clubs, bronze spearheads, and flint and bronze arrowheads. Now, an archaeologist from the Lower Saxony State Office for Cultural Heritage have analyzed the remains to learn more about the peoples who fought in the battle.

According to Science, in the Bronze Age, Northern Europe was long dismissed as a backwater, overshadowed by more sophisticated civilizations in the Near East and Greece.

They believe the battle was of a scale-up until then, completely unknown north of the Alps. It suggests more organizations and violence in the area than once thought.

Speaking to Live Science, Professor Thomas Terberger, one of the archaeologists working on the excavation, said: ‘We are very confident that the human remain is more or less lying in the position where they died.’

While 140 skeletons have been found, Professor Terberger stated that this is likely only a fraction of the men involved. He estimates that more than 2000 people were involved in the battle. He said: ‘This is beyond the local scale of conflict,’ suggesting that the battle went beyond neighbours.

To understand more about the fighters, the researcher conducted a chemical analysis of the skeletons, looking for elements like strontium, which can leave a geographically specific signature in bones.

While the results showed that the fighter was a large, diverse group of non-locals, the archaeologist was unable to pinpoint specifically where they were from.

The analysis did suggest that many of the fighters came from the south – either southern Germany or Central Europe – a find that was in line with many pieces of evidence discovered at the site, including Central-European arrowheads and pins.

The fighters closely resembled the slain soldiers discovered in a nearby mass grave at Wittstock, dating back to 1636. While this is more recent than the battle at Tollense, Professor Terberger believes that it could have some important parallels for the Bronze Age.

In the battle at Wittstock, soldiers were known to come from all over Europe. If the fighters at Tollense were also multi-ethnic, it might mean ‘these were the warrior who was trained as warriors’, rather than locals, according to Professor Terberger.

One key question that remains to be answered is the motivation behind the battle. The researcher now hopes to look to the wider landscape near the battlefield to look for answers.

The Tollense River was known to be an important route for north-south trade, and the battle took place beside a bridge connecting two sides of the river.

Professor Terberger said: ‘It was probably an important crossing in the landscape.’ The time when the battle took place was also right in the middle of a huge cultural shift in Central Europe, as people arrived from the Mediterranean. Professor Terberger added: ‘It is not by accident that our battlefield site is dating to this period of time.’