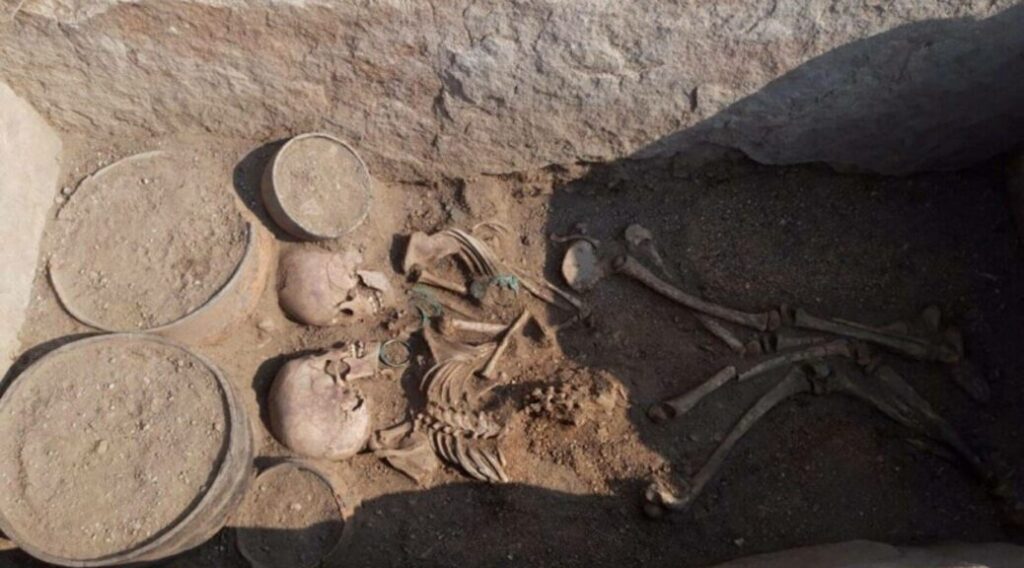 In a cemetery dating back about 4000 years, in Kazakhstan, the bodies of a young man and women were discovered buried face to face, probably in their twenties. You might be in a romantic connection they were a couple.

The bodies of a man and woman who died 4,000 years ago have been found buried face-to-face in a grave in Kazakhstan.

Archaeologists discovered the burial in an ancient cemetery that has remains of humans and horses, Kazakhstan archaeologists said in a Kazakh-language statement.

The man and woman were buried with a variety of grave goods that includes jewelry (some of which is gold), knives, ceramics, and beads. The remains of horses were also found near the burial.

While the statement says that the pair is “young” it doesn’t give an age range.

It’s not clear what killed the man and woman or their exact relationship to each other, including whether they were romantically involved.

The rich burial goods suggest that the man and woman came from wealthy families, archaeologists said in their statement.

Archaeological remains found at other sites in Kazakhstan suggest that the pair lived at a time when fighting and conflicts occurred frequently in the region, archaeologists also said.

Excavation of the cemetery and analysis of the remains are ongoing. The archaeological team is led by Igor Kukushkin, an archaeology professor at Saryarka Archaeological Institute at Karaganda State University in Kazakhstan. Live Science was unable to reach Kukushkin at the time this story was published.

Numerous archaeological remains have been uncovered in Kazakhstan. In 2016, a team led by Kukushkin found the remains of a 3,000-year-old, pyramid-shaped mausoleum.

In 2014, a different team of archaeologists identified 50 geoglyphs with various shapes and sizes, including a massive swastika, that appear to date as far back as 2,800 years.