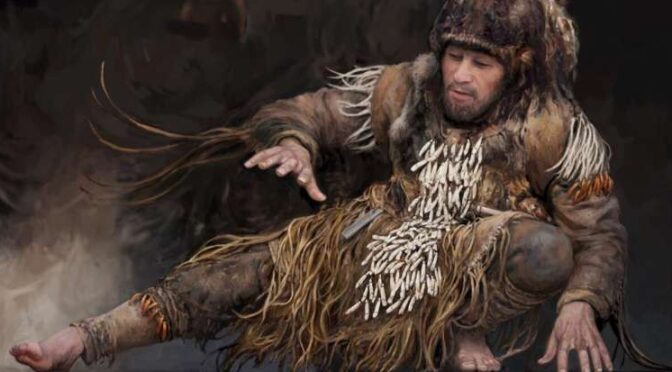 “Ornaments composed of elk teeth suspended from or sown onto clothing emit a loud rattling noise when moving,” says auditory archaeologist and Academy of Finland Research Fellow Riitta Rainio from the University of Helsinki.

“Wearing such rattlers while dancing makes it easier to immerse yourself in the soundscape, eventually letting the sound and rhythm take control of your movements. It is as if the dancer is led in the dance by someone.”

Rainio is well versed in the topic, as she danced, for research purposes, for six consecutive hours, wearing elk tooth ornaments produced according to the Stone Age model.

Rainio and artist Juha Valkeapää held a performance to find out what kind of wear marks are formed in the teeth when they bang against each other and move in all directions.

The sound of a tooth rattler can be clear and bright or loud and pounding, depending on the number and quality of the teeth, as well as the intensity of movement.

Microanalysis demonstrates that tooth wear marks are the result of dancing.

The teeth worn out by dancing were analyzed for any microscopic marks before and after the dancing. These marks were then compared to the findings made in the Yuzhniy Oleniy Ostrov graves by Evgeny Girya, an archaeologist specialized in micro-marks at the Russian Academy of Sciences.

Girya documented and analyzed the wear marks in the elk teeth found in four graves chosen for the experiment. Comparing the chips, hollows, cuts and smoothened surfaces of the teeth, he observed a clear resemblance between teeth worn out by dancing and the Stone Age teeth.

However, the marks in the Stone Age teeth were deeper and more extensive. According to Girya, the results show that the marks are the result of similar activity.

“As the Stone Age teeth were worn for years or even decades, it’s no surprise that their marks are so distinctive,” Girya says.

Associate Professor of Archaeology Kristiina Mannermaa from the University of Helsinki is excited by the research findings.

“Elk tooth rattlers are fascinating since they transport modern people to a soundscape that is thousands of years old and to its emotional rhythms that guide the body.

You can close your eyes, listen to the sound of the rattlers and drift on the soundwaves to a lakeside campfire in the world of Stone Age hunter-gatherers.”

A total of 177 graves of women, men and children have been found in the Yuzhniy Oleniy Ostrov burial site, of which more than half contain several elk tooth ornaments, some of them composed of over 300 individual teeth.