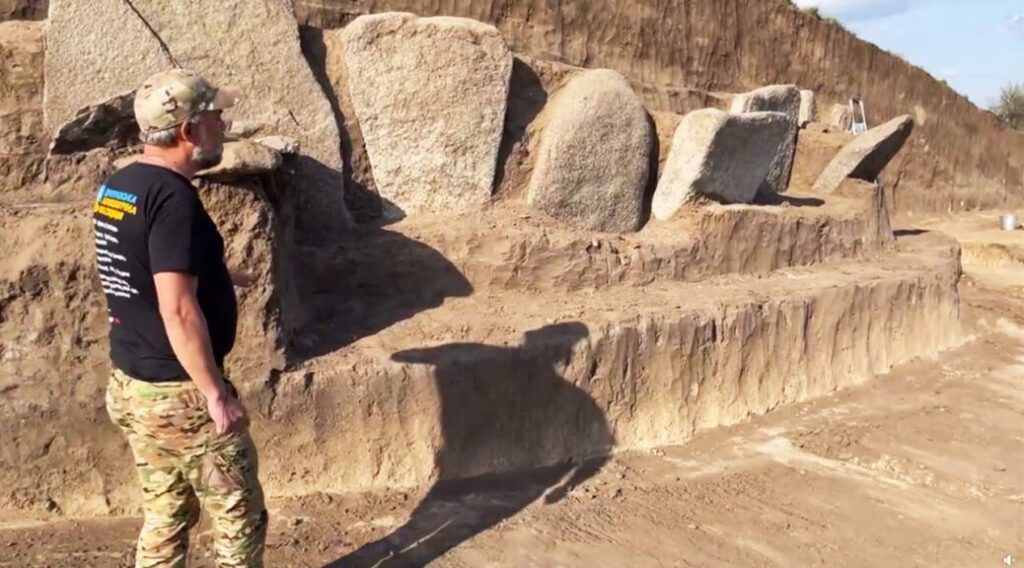 Archaeological digs still reveal historical aspects that remain puzzling to some. Such is the case with these archaeologists who are on a mission in Ukraine in the village of Novooleksandrivka, about ten kilometres south of the city of Dnipro.

According to them, they discovered a place where blocks of stone several meters high form a circle. In archaeology, this is known as the Cromlech (megalithic monument made of menhirs in a circle) or Stonehenge, based on the one in the United Kingdom: The Stonehenge in Amesbury, which attracts millions of visitors every year. An original discovery for Ukraine!

The Stone Hill by Novooleksandrivka

The 5-channel television station reports that a 4,500 to 5,000-year-old burial mound has been discovered. “In the middle of the tumulus (Kurgan in Ukraine), archaeologists found a gigantic cromlech – stone blocks several meters high that form a circle.”

According to the journalistic report, each block of stone weighs about a ton. The blocks are carefully cut into a circle. Compared to the pyramids of Egypt, this side would be even older than 500 years.

Novooleksandrivka would not be the first Stonehenge discovered in Ukraine, but it is the youngest. And most importantly, it seems to be the largest ever discovered.

Oleksandr Kolomiytsev, the spokesman for the regional road service, explains: “The construction involved moving a huge volume of earth and a considerable workforce.

It is possible that the person buried and protected by the Cromlech was highly regarded in society. This is the only way to explain the monumental character of this construction. “”

In fact, the various StoneHenge that has been discovered in the world all function as funerary memorials.

The Novooleksandrivka site was to become an open-air museum. A stroke of luck for Ukraine, which believes that this ancient monument can attract millions of tourists every year!

The secret of the British StoneHenge!

The StoneHenge in Amesbury, UK, was not built where it is now, according to a study in Cambridge University’s Antiquity magazine.

This observation follows the discovery of a place where large stones were excavated … But no trace of these stones nearby. They conclude that these stones were brought to the location of the current StoneHenge.

The circle was dismantled by Merlin and shipped by 15,000 men to Amesbury in the Salisbury Plain. Merlin wanted the Giants Dance Stones for their magical and healing properties.

Indeed, if the UK location is already a major tourist hit, Ukraine could attract many historic tourists too! Ukraine is a beautiful country that bears the historical mark of Chernobyl! But there are so many other things to discover there: Kiev, for example, is a jewel!