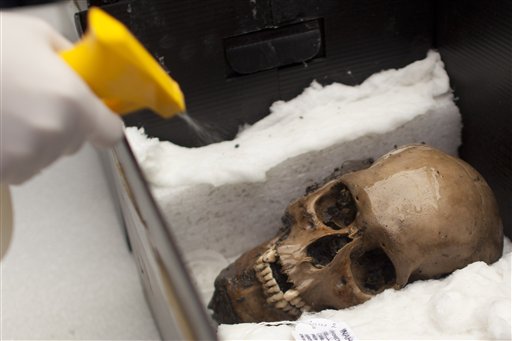 Mexican archaeologists said Friday they uncovered the largest number of skulls ever found in one offering at the most sacred temple of the Aztec empire dating back more than 500 years.

The finding reveals new ways the pre-Colombian civilization used skulls in rituals at Mexico City’s Templo Mayor, experts said. That’s where the most important Aztec ceremonies took place between 1325 and the Spanish conquest in 1521.

The 50 skulls were found at one sacrificial stone. Five were buried under the stone, and each had holes on both sides—signalling they were hung on a skull rack.

Archaeologist Raul Barrera of Mexico’s National Institute of Anthropology and History said the other 45 skulls appeared to have just been dumped on top of the stone.

The team of archaeologists unearthed the skulls and jawbones in August. They stumbled on them as they were renovating a section of the Templo Mayor in the heart of Mexico City.

Barrera said they believe the 45 skulls were those of women and men between 20 and 35 years old and could have been dug up from other sites and reburied.

Last August, the Mexican government announced experts had found an unprecedented human burial at another spot in the same temple in which the skeleton of a young woman, possibly sacrificed personifying a goddess, was surrounded by piles of nearly 1,800 bones.

Another unusual finding this summer was a “sacred tree,” which looks like a battered oak trunk emerging from a well and which experts say was brought from a mountain region for a ritual.

The skulls shown to the media Friday were in good condition but cracked on each side of the head, possibly because of the wooden stake that ran through them so they could be placed in a skull rack.

Barrera said the key in the discovery was the sacrificial rock, which looks like a grey headstone.

“Underneath the sacrificial stone, we found an offering of five skulls. These skulls were pierced with a stick,” he said. “These are very important findings.”

University of Florida archaeologist Susan Gillespie, who was not involved in the excavation, said it caught her attention that the skulls that had been on the rack, called tzompantli, were buried separately.

“It provides rather novel information on the use and reuse of skulls for ritual events at the Templo Mayor,” Gillespie said in an email.

Also, the common belief about Aztec sacrificial stones is that a person being sacrificed was killed by cutting open the chest and pulling out the heart.

“We normally associate (it) with heart removal rather than decapitation,” she said. “It ultimately gives us a better understanding of how the Aztecs used the human body in various ways in their ritual practices.