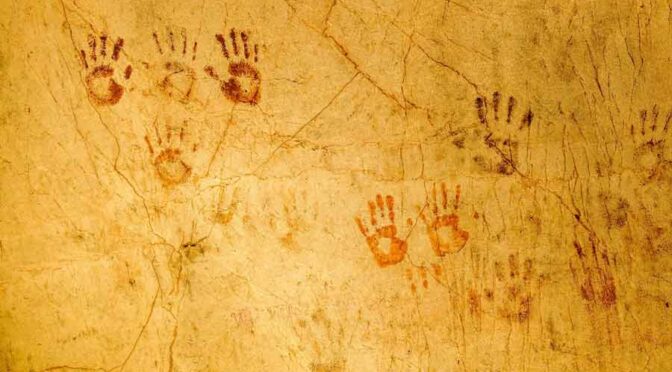 More than 100 black and red handprints were discovered on the walls of a cave in Mexico, possibly created during an ancient Mayan ritual.

Archaeologists said most of the 137 prints were made by children some 1,200 years ago and that it was part of a tradition when children entered puberty.

The cave, located near the northern tip of the Yucatan Peninsula, is surrounded by large pyramid-like ruins and sits some 33 feet beneath a Ceiba tree that is considered sacred in Mayan beliefs.

Archaeologists Sergio Grosjean, who currently is working at the site, said: ‘They imprinted their hands on the walls in black… which symbolized death, but that didn’t mean they were going to be killed, but rather died from a ritual perspective.’

‘Afterwards, these children imprinted their hands in red, which was a reference to war or life.’

The Mayan rite of passage was for both boys and girls.

Girls of the tribe would receive a shell to wear around their waists, indicating they were of age to have children.

Boys, however, went on their first hunt and performed a bloodletting ritual to confirm that they could be viewed as men. After completing the ritual, they received a white bead to wear in their hair and moved to an area in the community known as a ‘home of unmarried men’ until marriage.

Handprints in a cave had not been discovered by experts before. Along with the handprints, archaeologists found a carved face and six painted reliefs, which date from between 800 through 1000 AD. In 1000 AD, a severe drought struck the region and contributed to the Mayans’ sudden abandonment of major cities.

While the first Mayan settlements date back nearly 4,000 years, large groups existed when Spanish conquerors arrived in the early 1500s.

In June 2020, archaeologists discovered a 3,000-year-old Mayan temple, making it the ancient civilization’s oldest and largest known monument. The site in Tabasco, Mexico, had been discovered in 2017 by international team archaeologists led by the University of Arizona.

The site, called Aquada Fénix, is 4,600 feet long and up to 50 feet high, making it larger than the Mayan pyramids and palaces of later periods.

It was built between 800 BC and 1000 BC, according to the team behind the discovery.

One of the most remarkable revelations from the find was the complete lack of stone sculptures related to rulers and elites, such as colossal heads and thrones, which are commonly seen in other Mayan temples.

This suggests that early Mayans were more egalitarian than later generations.