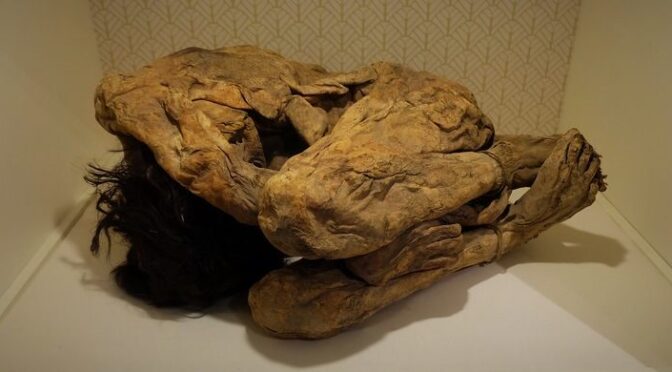 In 1980, while cleaning out her garage, a woman found the hidden mummies

In 1966, two California teenagers became fascinated with mummies and archaeology. They wanted to make a find for themselves and had heard that the prehistoric tribes of northern Mexico had a tradition of burying their dead in caves.

Near Sunny San Diego, the small area known as Lemon Grove is famous for its Giant Lemon, a sight to behold for all roadside novelty-seekers. Also, mummies.

What do you do when your earnest search for a mummy actually yields one? What if it yields two? If you are the two teenage boys who managed to find this treasure trove of mummification, you panic and hide them in a garage.

In 1966, two California boys went to Chihuahua, Mexico in search of mummies.

Quite the mummy fanatics, they knew Indian tribes had once brought their dead to the cool, dry caves near Chihuahua, and considered the area prime hunting grounds for a mummy of their very own.

For over a month they peeked into every nook and cranny of the caves until their tenacity finally paid off—the boys not only found a coveted mummy, they found two.

The boys gazed at their prizes, the mummified remains of a teenage girl, as well as the tinier corpse of a one-year-old. Despite their determination to find them, they were now faced with the reality of having them.

They couldn’t exactly carry the bodies out of the country in backpacks, and the gravity of their mothers finding out began to become a very worrisome, previously overlooked issue. So the boys did what any secret-keeping teen would—they smuggled the bodies over the border, and convinced a friend to hide them in her garage.

With no real endgame in sight the boys left their macabre finds in this safe location—safe that is until their friend’s mother decided that it was tie to do some spring cleaning. 14 years after being stashed away behind the garden tools and moving boxes, the girls were found.

The woman who found them was understandably shaken and naturally assumed that some sort of murder had taken place. Stolen mummies stashed there by neighbour kids isn’t exactly the first place the mind goes.

The police recognized immediately that the bodies were not likely to be murder victims, but could not figure out how the two ancient cadavers found their way into this suburban family garage—the teen is thought to have died between  A.D. 1040 and 1260. While they investigated, the mummies were delivered to the San Diego Museum of Man for safekeeping.

Fondly nicknamed “The Lemon Grove Girl”, the teenage mummy and her infant companion were stashed away until rightful ownership could be sorted.

Eventually, the police caught up with the boys, who were now grown men of course, and asked for an explanation. The men told their story, and in an ever so generous act of contrition offered to donate their mummies to the Museum of Man.

The officials, eyes rolling, informed the men that due to their juvenile status when the crime was committed and the time that had passed, they were lucky that no charges would be pressed, and thanked them for the charitable offer, but the mummies were not theirs to give.

The museum however was very keen on becoming the keeper of the girls, and after being granted permission by the Mexican government to retain them, including the Lemon Grove Girl in their gorgeous Ancient Egypt and Mummies exhibit.