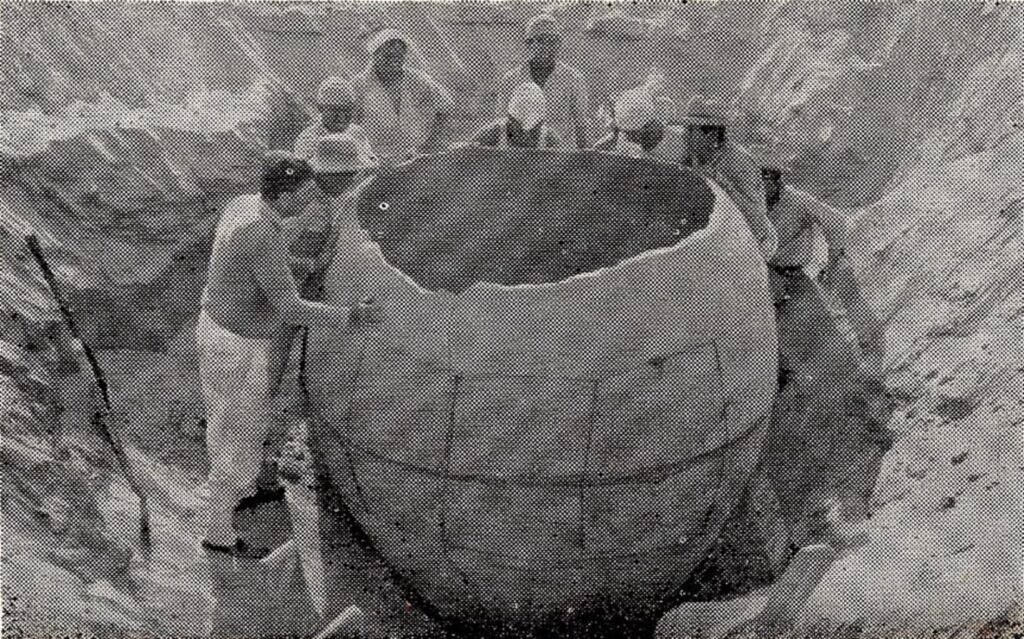 The 2,400-Year-Old Giant Clay Vase Discovered in Peru You Probably Never Heard About

On October 27, 1966, the Regional Museum of Ica discovered a unique object of unseen proportions; a massive granary bowl, until then the largest pre-Hispanic pot found in Peru.

The fired clay vessel dimensions were 2 meters in diameter, 2.8 meters in height, and sections of 5 cm on the walls and 12 cm at the base.

Inside and at different levels, archaeologists found seeds of beans, Pallares, yucca, lucuma, and guavas. No remains of stoves were found in the vicinity, the reason why archaeologists believe that the giant clay pot was transported in the distant past, approximately 2,400 years ago, from another place to where it was eventually discovered.

The giant clay pot was discovered in the Paracas region of Peru, in the Pisco Valley.

Unique, enduring, and of unusual proportions, its discovery raised numerous questions. To this date, little or no information about the massive clay pot or other similar artefacts has been made available, forcing us to extrapolate more about if it was found in the region.

the above subtitle mentions three names that, if you know anything about Peru’s ancient history, then they should ring a bell.

The Paracas culture was an ancient Andean culture that was edited in present-day Peru some 2,100 years ago, developing an extensive knowledge of irrigation, water management, textile production, and ceramic artefacts. More importantly, they are famous for artificial cranial deformation, by which the heads of infants and babies were elongated and deformed, producing unique, long skulls.

Ica is an area in southern Peru that was inhabited by various ancient cultures throughout history. Home to the Museo Reginal the Ica, Ica is home to a treasure trove of history.

It was in Ica Peru where in the 1960s, a man called Javier Cabrera introduced the world to the so-called Ica Stones, a controversial collection of andesite stones, allegedly found in the Ica province bearing illustrations of dinosaurs, humanoid figurines, and what many have interpreted as evidence of advanced technology.

Today, these artefacts have been tagged as a modern hoax and discredited. archaeologist Ken Feder commented on the stones: “The Ica Stones are not the most sophisticated of the archaeological hoaxes discussed in this book, but they certainly rank up there as the most preposterous.”

Nazca is perhaps the most famous. Home to the famous Nazca lines, this region is perhaps one of the most famous in Peru. The Nazca Lines are a group of massive geoglyphs carved into the Nazca desert in southern Peru. Likely created around 500 BC, the massive lines cover a combined length of  1,300 km (808 mi), and the group covers an area of about 50 square kilometres (19 sq mi).

Its massive size is unusual, and although it may give rise to conspiracies given the fact it was located not far from the Nazca Lines, the Ica region, and the so-called Paracas skulls, the contents of the clay pot, and the material it was built from can tell us much about its purpose.

For starters, the Regional Ica Museum clearly describes the clay pot as a granary jar; an object inside which ancient people would store seeds or food. It is the biggest one found in Peru, but it isn’t necessarily the only one. Dating back 2,400 years, the massive pot was crafted around 400 BC. If we look at the division introduced by Peruvian archaeologist Julio C. Tello, the massive clay pot was made during the Paracas Necropolis period, which lasted from around 500 BC to around 200 AD.

The Paracas-Necropolis period got its name from the fact that its rectangular cemeteries, discovered in Warikayan, were divided into several compartments or underground chambers, which to Tello reassembled a “city of the dead” (necropolis). Each large chamber allegedly would have been owned by a specific family or clan, which buried their ancestors for many generations.

Whether the clay vase originated from Warikayan, which was a large ancient settlement, or from a nearby settlement remains an unanswered question. Since objects of similar proportions have not been found in the region, archaeologists believe that the ancient clay container was brought to where it was eventually found in the distant past, perhaps as a trade or a gift from neighbouring settlements.

We do know that before it was abandoned, it was used by the ancients to store food. We know it was produced of fire clay. Its unusual size suggests that whoever built it wanted to store large amounts of material inside.

It likely held seeds or food and was covered and may have been buried beneath the ground, covered by a top. Burying the clay vase into the surface and storing food inside it may have helped preserve the food for longer periods of time, protecting it from higher temperatures above the surface.

The giant Ica Clay Vase is one of the more interesting yet lesser known artefacts, part of the history of a region where mighty ancient cultures developed, evolved, and eventually disappeared.

It proves that there is more to the region than the Ica Stones, the Nazca Lines, and the strange Paracas Skulls. It also tells us that incredible artefacts may remain buried beneath our feet, hidden from history buried for thousands of years, waiting to be excavated and restored to their former glory.