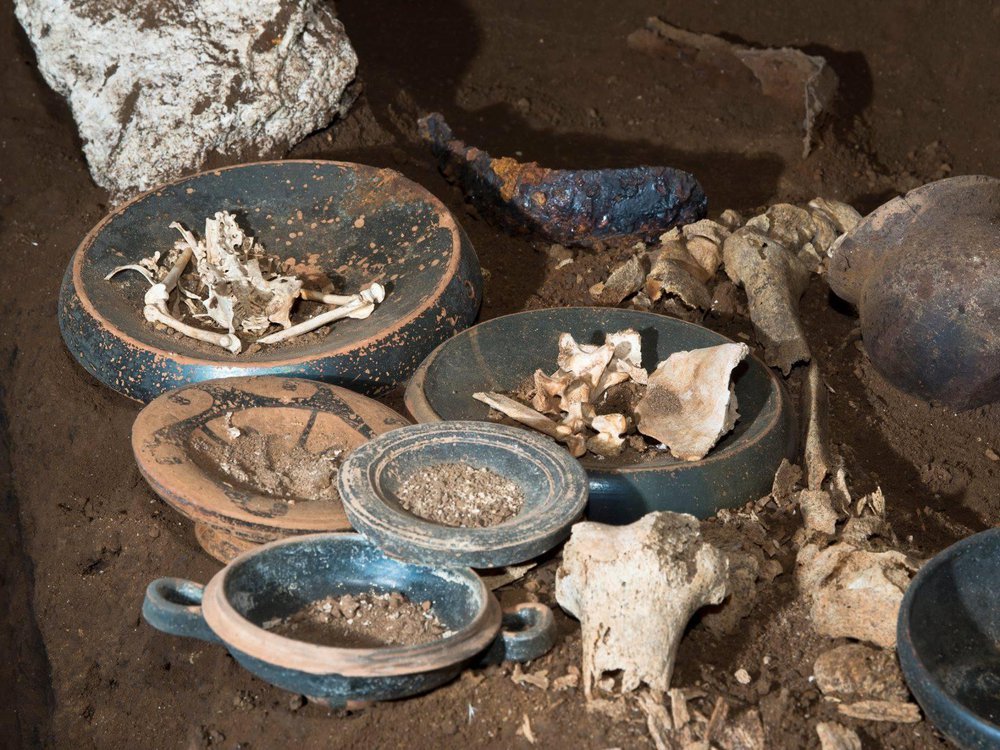 It’s a rare day when archaeologists come across an ancient burial that hasn’t been destroyed by natural processes, ravaged by war or looted by artefact hunters.

It’s why King Tut’s untouched tomb was so significant and why archaeologists are going gaga over the tomb of a Greek warrior discovered in Pylos. Add another to the list; several weeks ago, archaeologists in Rome uncovered an untouched Roman tomb that they’re calling the Tomb of the Athlete, the Local Italy reports.

The tomb was discovered in the Case Rosse area west of the centre of Rome by an earthmover working to extend an aqueduct about 6 feet underground.

Francesco Prosperetti, who oversees archaeology in Rome, tells Elisabetta Povoledo at The New York Times that finding the tomb was sheer luck. “Had the machine dug just four inches to the left, we would have never found the tomb,” he says.

The discovery also unearthed an assortment of jugs and dishes, a bronze coin, along with dishes of chicken, rabbit and another animal believed to be a lamb or goat, likely offerings to sustain them in the afterlife.

Among the trove were two strigils, blunt hooks that Romans used to clean themselves and wipe off oil while bathing and that athletes used to scrape away sweat. In fact, the strigil was considered the symbol of an athlete in the cultures of ancient Greece and Rome.

Still, calling the find the “Tomb of the Athlete,” is more or less a marketing move, Fabio Turchetta, one of the archaeologists working on the site, tells Povoledo since all the men inside are over 35 and would have been well past their prime by classical standards. “To say there was an athlete is a bit of stretch, but it works journalistically,” as he puts it diplomatically.

Based on the coin found in the tomb, which includes an image of Minerva on one side and a horse head with the word “Romano” on the other, the tomb dates between 335 and 312 B.C.E.

During the heyday of the Roman Republic. Researchers have begun the process of removing the bodies from the tomb, which will be sent to the laboratory for analysis and DNA testing to determine if they are a family.

A paleobotanist also collected samples of pollen and plant material to help figure out the flora of the area when the tomb was constructed. The structure itself has been documented by a laser scan and will be sealed up once excavations are complete.

Turchetta tells Povoledo that the area the tomb was found in has been heavily surveyed and excavated in the past, so finding the intact chamber was surprising and emotional.

This isn’t the first time that construction in Rome has uncovered amazing finds. Just last year, while expanding the metro system, archaeologists found the bones of a dog inside the remains of an aristocratic home that burned down during the reign of emperor Septimius Severus in the 2nd century C.E.