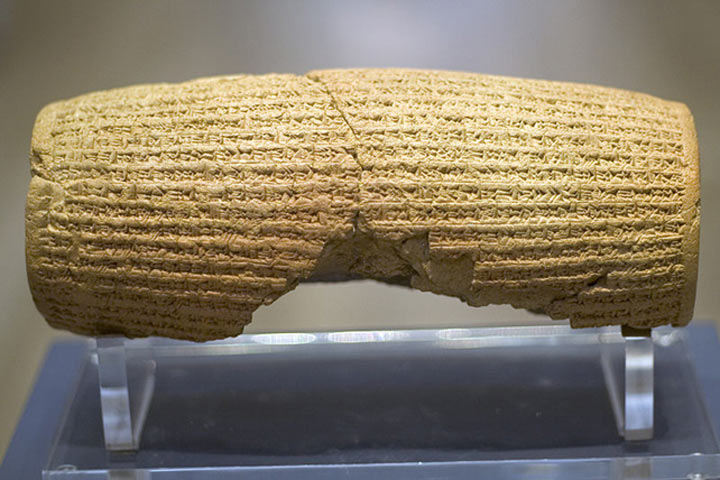 The Cyrus Cylinder and the ancient proclamation of human rights

More than 2 millennia before the French Revolution introduced the Declaration of the Rights of Man and of the Citizens, an ancient Near Eastern monarch issued a charter that is considered to be the oldest known declaration of human rights. This charter is known today as the Cyrus Cylinder.

The Cyrus Cylinder was discovered in the ruins of Babylon, in modern Iraq, in March 1879. The ancient relic, which was a foundation deposit at the city’s main temple, the Ésagila, was made of baked clay and measured 22.5 cm (8.85 in) in length.

On the cylinder is an account detailing the conquest of Babylon in 539 B.C. by Persian king Cyrus the Great, the founder of the Achaemenid Empire, who had created the largest empire of the era.

It also describes the capture of Nabonidus, the last king of Babylon. The account was inscribed in cuneiform text and has been dated between 539 and 530 B.C.

The inscription on the cylinder speaks of Cyrus’ promotion of religious, racial, and linguistic freedom and his permission to those deported by the Babylonians to return to their homelands.

It extols Cyrus as a benefactor of the citizens of Babylonia who improved their lives and restored temples and cult sanctuaries across Mesopotamia and elsewhere in the region. Some segments of the text read:

“I announce that I will respect the traditions, customs and religions of the nations of my empire and never let any of my governours and subordinates look down on or insult them while I am alive. From now on…, I never let anyone oppress any others, and if it occurs, I will take his or her right back and penalize the oppressor.”

“I will never let anyone take possession of movable and landed properties of the others by force or without compensation. While I am alive, I prevent unpaid, forced labour. Today, I announce that everyone is free to choose a religion. People are free to live in all regions and take up a job provided that they never violate other’s rights.”

Some critics have argued that the belief that the Cyrus Cylinder is the world’s first charter of human rights is an anachronism, and ignores the context of the document.

They claim that Cyrus seemed to be more concerned about the views of the gods, and merely took steps to appease them, rather than acting for the goodness of the people. For instance, it is written on the cylinder:

“The gods of the land of Sumer and Akkad which Nabonidus – to the fury of the lord of the gods – had brought into Shuanna, at the command of Marduk, the great lord, I returned them unharmed to their cells, in the sanctuaries that make them happy.”

In exchange, these gods were supposed to return the favour to Cyrus:

“May all the gods that I returned to their sanctuaries, every day before Bel and Nabu, ask for a long life for me, and mention my good deeds, and say to Marduk, my lord, this: “Cyrus, the king who fears you, and Cambyses his son, may they be the provisioners of our shrines until distant (?) days and the population of Babylon call blessings on my kingship. I have enabled all the lands to live in peace.”

Furthermore, they argue, the fact that the Cylinder was discovered as a foundation deposit of the Ésagila suggests that Cyrus’ intended audience were the various gods of the realm, rather than mortal beings.

Regardless of which perspective is taken, the Cyrus Cylinder is undoubtedly an incredible piece of writing that brings to life the events that transpired over 2,500 years ago and opens a window into the thoughts and desires of a powerful king that once ruled over an empire.