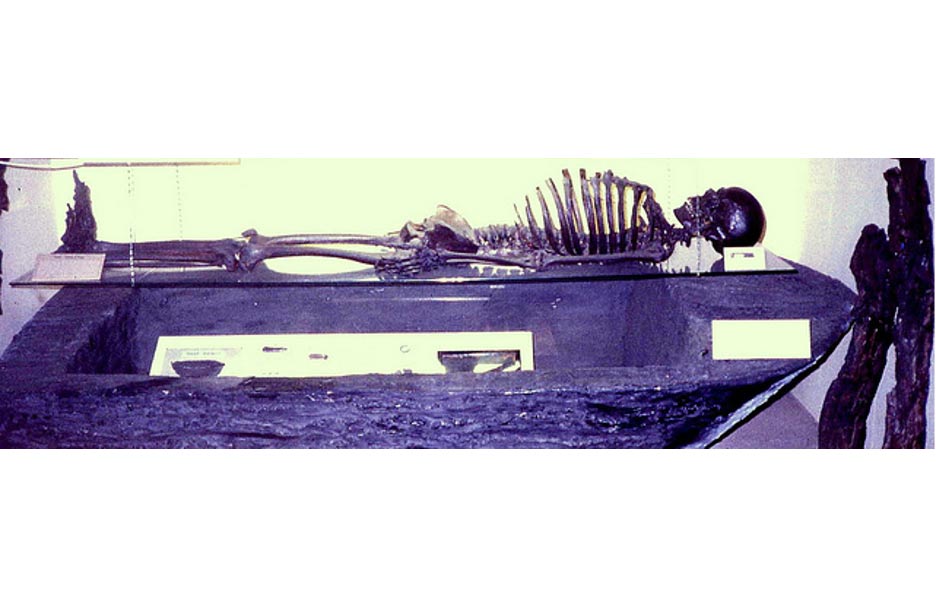 The Gristhorpe Man: A Bronze Age Skeleton with a Story to Tell

On July 10, 1834, William Beswick excavated a barrow on his land in Gristhorpe, North Yorkshire, England. What he found gave him quite the surprise. Beswick discovered a coffin in the shape of a scooped-out oak tree. Inside the coffin was something special – the skeleton of a Bronze Age man, known today as the Gristhorpe Man.

When Beswick made his discovery members of the Scarborough Philosophical Society, which consisted of doctors and other learned members of society, were also present.

Seeing that the skeletal remains of the Gristhorpe Man were so fragile, they made an attempt to preserve them.

Filling a laundry copper with horse glue, the bones were boiled for eight hours. Thanks to them, the skeleton is still complete today.

Unfortunately, the process they used to conserve the bones has rendered the study of DNA or the use of collagen from the body for dating purposes impossible.

The Gristhorpe Man, his coffin and his grave goods were donated to the Scarborough Philosophical Society, and displayed at the Rotunda Museum in Scarborough.

A monograph of the discovery was written by William Crawford Williamson, the 17-year-old son of the museum’s first keeper, John Williamson. This piece of work included drawings of the skull and grave goods, as well as details regarding the method of preservation and the coffin dimensions.

Modern  Insights into the Gristhorpe Man

This could have been the result of a relatively good diet. This in turn allowed archaeologists to infer that the Gristhorpe Man was an individual of high social status, perhaps a tribal chief.

Additional clues that indicate this status may be found in the grave goods. Before being placed inside the oak coffin, the body of the Gristhorpe Man was wrapped in a skin cloak, of which only fragments survive today.

Other grave goods included a dagger, flint tools, a wicker basket containing food residue, and a bark vessel, which, according to modern research, contained milk.

It is the dagger that will help archaeologists date the Gristhorpe Man more precisely. This dagger was made of bronze and had a polished whalebone pommel.

Based on the composition of the metal, it has been suggested that the bulk of it came from southwestern Ireland, whilst the tin originated in southwestern England. In addition to shedding light on ancient trade routes in the British Isles, this knowledge may also allow comparison with other British examples where radiocarbon dates are available.

Modern science has also revealed that the Gristhorpe Man was likely to have been a warrior. This is due to the presence of numerous healed fractures.

While we may never be able to know if the Gristhorpe Man’s personality matched that of a typical Bronze Age warrior, some Victorians believed that it was possible. Using the now-debunked ‘science’ of phrenology, some claimed that a person’s personality may be determined by the shape of the skull. Based on the skull of the Gristhorpe Man, a certain Dr. Elliotson concluded that his characteristics included a high level of combativeness and destructiveness, as well as a low level of constructiveness and imitation.

Researchers have also gone one step further by using modern software techniques to animate the Gristhorpe Man’s facial reconstruction. As a result, visitors to the Rotunda Museum are able to not only see how the Gristhorpe Man may have looked like when he was alive but also hear him speak – albeit in modern English rather than a form of Proto-Celtic language that he might have spoken.