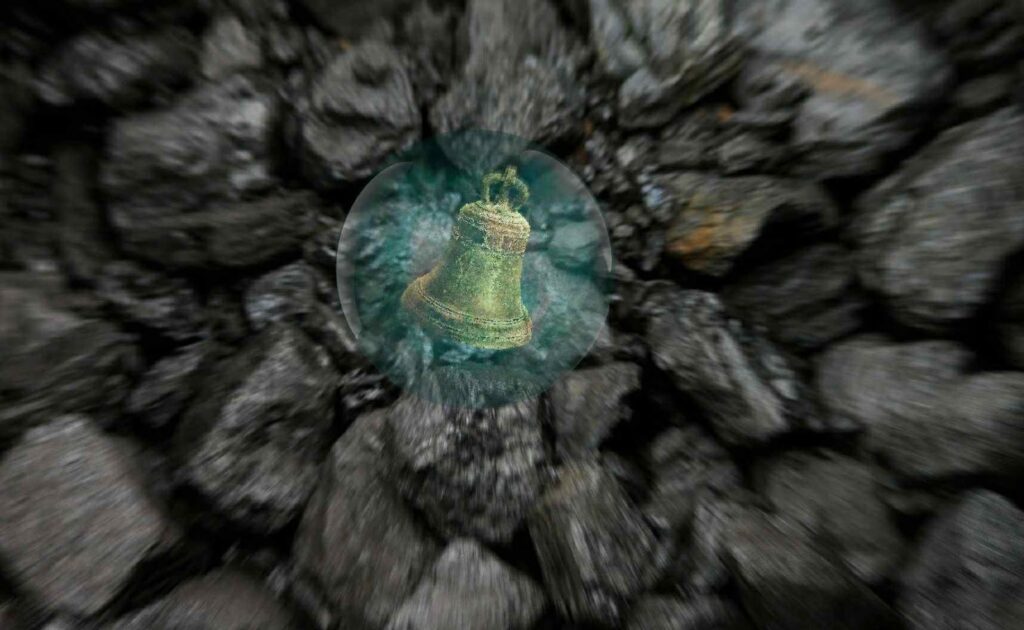 A ‘brass bell’ claimed to be 300 million-year-old!

In 1944, as a ten-year-old boy, Newton Anderson’s task was to keep the coal furnace stoked at his home in Buckhannon, West Virginia, US. One evening he went into the basement to refuel the furnace and carried a particularly large lump of coal on his shovel.

As he carried the loaded shovel, it wobbled and the coal fell onto the floor, breaking the lump in two. A slender metallic object was revealed, protruding from one of the broken halves. Anderson set aside the piece with the curious object and placed the remainder into the furnace.

Over the next couple of days, the boy extracted a small bell from the coal, first by whacking it with a croquet mallet and then by cleaning it with lye and a scrub brush. Unfortunately, he scoured all the coal of the intriguing artefact! But his parents and others witnessed the bell that he brought up from the basement and it became an object of conversation, residing on an old secretary desk shelf.

Coal is found in sedimentary strata (layers of soil or rock), which are usually called coal beds or coal seams. Generally, there are four different types of coal as follows: Peat, Lignite, Bituminous & Anthracite. Most of the world’s coal was formed in the Carboniferous Age between approximately 298.9 and 358.9 million years ago, and coal reserves are six times greater than oil and petroleum reserves. On the other hand, our ancestors first started to use brass in the Bronze Age which was marked between 2500 to 800 BC.

It was a period of time between the Stone Age and the Iron Age when bronze was used widely to make tools, weapons and other implements. Bronze is made when copper is heated and mixed with tin, creating a stronger metal than copper; and brass is another metallic alloy that is made of copper and zinc. So, how is it possible to remain a bronze age metal inside the million years old coal lumps??

In the 1963–1964 timeframe, a man named Boris Bilas took the bell to the geology department at the University of Delaware at Wilmington, where it was studied and then returned. They confirmed that the bell was handmade. Anderson eventually moved to Florida and became a chemistry teacher.

Later in 1973, Dr. John Morris analyzed the artefact in the lab at the University of Oklahoma. Morris concluded that “Nuclear Activation Analysis determined it to be primarily of bronze with a curious admixture of zinc. A microprobe showed no residual traces of coal.”

According to the creationists, the answer is hidden in the Book of Genesis which points the brass bell to be millions of years old. Because, Tubal-Cain, a person mentioned in the Hebrew Bible in Genesis 4:22 as well as in the Book of Jasher 2:24 was said to be the “instructor of every artificer in brass and iron”. They believe that when the prehistoric civilization came to an end in the alleged flood, one of Tubal-Cain’s bells was buried with a mass of vegetation that became coal and ended up millions of years later in Newton Anderson’s coal bin.

Anderson spent a great deal of time researching the figure atop the bell. He discovered similarities to the Babylonian Southwest Wind Demon, called Pazuzu. The demon typically is shown with a prominent headpiece like the bell figure. Indeed the bell’s headpiece clearly is broken off, signifying that it may have been quite a bit taller. The clapper inside the bell is composed of iron and it still rings beautifully. The Hindu deity Garuda is sometimes depicted on top of bells, as is the Egyptian winged Goddess Isis. The kneeling posture with hands clasped is quite like Garuda’s representations. Because of this, some have argued that it must be an Indian Ghanta Bell.

Eventually, the “bell found in coal” became somewhat famous, being featured in various creationist and apologetics books. An evangelistic tract was made that presented the bell as indisputable proof of the worldwide deluge. Ripley’s “Believe it or Not” found out about the bell and sent a representative to investigate. Anderson was interviewed and the fascinating artefact was prominently featured in the 1992 CBS docudrama production called Ancient Secrets of the Bible and is now part of the Genesis Park collection. The bell was even displayed at the San di‌ego Museum of Natural History for a couple of years, and they made an offer to purchase it.

At the request of Genesis Park’s authority, Mr. Anderson agreed to take a lie detector test to further validate his claims. In 2007, an expert polygraph specialist named Stan Fulmer who worked on death row cases was hired to examine him. Anderson was found to be credible and he clearly passed the test. The polygraph examination report can be viewed online here.

What is your opinion on this mystical artefact? Is it really a 300-million-year-old Brass bell? Could it be possible that the human or human-like lives have been spent here on this planet many times before in the long gap of Earth’s timeline? If it’s not the case, then how is it possible to remain the bell inside a 300-million-year-old coal lump? Or, the lie detector machine was actually a liar itself??

During its dramatic 4.6 billion year history, Earth has gone through a series of major geological and biological changes.

We, humans, have only been around for a tiny fraction of the Earth’s 4.6-billion-year history, and we still don’t know every detail of the Earth’s time. We still don’t know a lot about what is right underneath our feet, we don’t know much about Earth’s first 1.5 billion years, and we don’t know why the universe exists. So, nearly everything is a mystery to us still to date; and what is not, is simply called “science” by human beings. Here, that’s the priority of science, it always finds out the perfect conclusion for every mysterious thing, and it’s indeed a never-ending journey.

So, our mission is neither to make the people superstitious nor to make fanatic at all, and I personally don’t like to spread hoaxes to make false publicity, providing such kind of atmosphere is actually useless to me. Today, we are here to discuss everything that is strange and unknown, and to view everyone’s valuable opinion. We believe that every single thought is like a seed and it needs to be sprouted with actions.