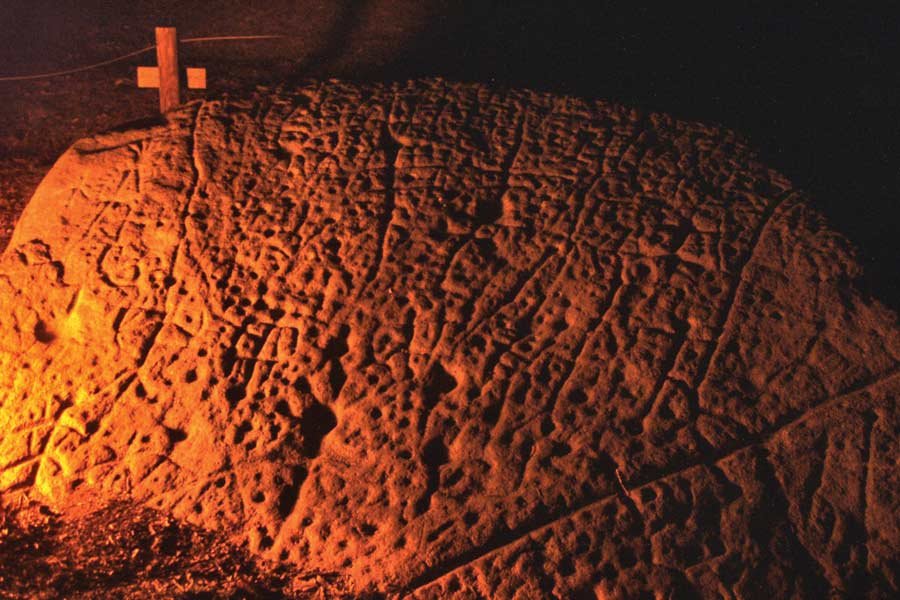 Cherokee tribe & The Nunnehi Beings: Travellers from other worlds

The Cherokee have many wonderful legends. Some of the most interesting stories involve people who looked just like normal Cherokee but were apparently supernatural beings called the Nunnehi (Nunne’hi). They were not natured spirits or gods but were said to be immortal.

The Nunnehi were a happy bunch who loved music and dance, helped lost travellers and protected the Cherokee people in times of war.

Nunne’hi has been translated literally as “people who live anywhere,” perhaps because they lived in strange places, underground, inside mountains and under streams. To the Cherokee, they are “the Immortals” or “people who live forever.” The singular is naye’hi. These immortals lived in North Carolina, Tennessee and Georgia, near the traditional lands of the Cherokee Nation.

One tale tells of a circular depression which the people said was a townhouse of the Nunnehi. Cherokee townhouses were public buildings that were circular, covered with bark, with benches inside. This townhouse and the people who lived there were apparently invisible and intangible. People would toss debris inside the depression and when they returned, the floor would be cleaned up again. After white settlers arrived, things tossed inside remained there. The Cherokee say the Nunnehi abandoned their townhouse because they were annoyed with the white people.

Other places where these supernatural people lived were hills, mounds and mountains in the area, especially high mountain peaks with few trees on top. It was said that the Nunnehi had large townhouses in Pilot Knob, under the Nikwasi mound in North Carolina, and under Blood Mountain in Georgia.

The Nunnehi could not be found if they did not want to be, for they were normally invisible. If you followed the sound of their music it would change and appear to be coming from another direction as soon as it seemed you were getting close. However, the Nunnehi were very friendly and helpful people and came out when they were needed. They often helped lost travellers, bringing them into the Nunnehi townhouses to care for them, and then taking them back to their homes.

One story tells of four women who came to dance in Nottely town. They left around midnight. Some of the men from the town watched these women and saw them head down the trail to the river. When the women reached the water, they disappeared. Then the people of the town knew they had been visited by Nunnehi women.

The Nunnehi Were Protectors Of The Cherokee

There are also stories of the Nunnehihelping Cherokee when attacked. Nikwasi mound was said to be the site of one such battle. An unknown tribe had invaded from the southeast. None could stand against them. When the warriors came to Nikwasi at the head of the Little Tennessee River, the people there were forced to retreat.

The people of the settlement thought they were lost, when a stranger appeared among them, saying he would defeat the invaders for them. Then, many warriors started coming from the side of the mound to attack the invaders. The people knew this meant they were being aided by the Nunnehi.

The Nunnehi became invisible when they fought. The invading warriors retreated but most of them were killed. When there were only a few left, the Nunnehi chief spared them, telling them they deserved their punishment for attacking a peaceful people. He told the remaining warriors to take this story back to their tribe.

Another story tells of an old man who was attacked while chopping wood. He was alone since the rest of his people had left for a hunt or a dance. He ran back to his house to get a weapon. When he came out he was surprised to see a band of warriors who had come to help him. They fought off the attackers but disappeared as soon as the old man went to thank them.

Some Cherokee Went To Live With Nunnehi

The Cherokee people on Valley River and Hiwassee heard Nunnehi voices calling to them to warn them that a bad time was coming. This was before their forced removal to Oklahoma in 1838, which became known as the “Trail of Tears.” The Nunnehi invited some of the Cherokee to come live with them in their mountain home at Pilot Knob, North Carolina. However, before the Cherokee could enter the home of the Immortals, they were required to fast for seven days and make no loud sounds. The people decided to trust the voices of the Nunnehi because they had always been helpful to them, so they fasted as requested, and then were taken inside the mountain to live.

In another village, the Cherokee people had come together in the townhouse to fast and on the seventh day, heard a noise like thunder coming towards them. The ground began to shake and the townhouse started lifting into the air. Despite the warnings, some of the people cried out in fear, and the Nunnehi dropped part of the townhouse.

The Nunnehi took the people of another village to live with them under the waters of a river. The Cherokee said that after that, you could hear the people talking under the river on warm summer days.

Cherokee who went to Oklahoma said that one of their biggest regrets was leaving their relatives who had joined the Nunnehi in their homelands.

These tales are fantastic and pleasant to read because they are generally stories of positive outcomes. It would be nice to believe there were really some immortals who helped people. Perhaps if you found yourself wandering in the mountains where the Cherokee once dwelled, you could hear them still, playing music and dancing with the relatives of those who walked the Trail of Tears.

In another article on Ancient Pages, there is also a legend about how the Cherokee came in conflict with a mysterious race known as the Moon-Eyed People. Unfortunately, their meeting with these beings was far from pleasant.