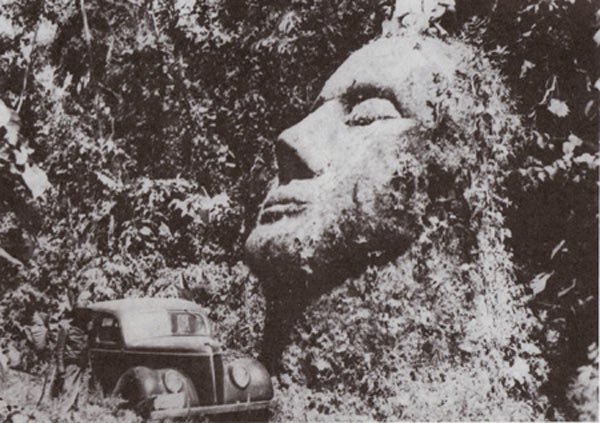 The mystery behind the Massive stone head of Guatemala

What on Earth is a massive stone head with Caucasian features doing in a jungle in Guatemala? Furthermore, is there a body hidden beneath the surface? Who built this massive monolith, and what was its true purpose?

There are certain findings that question history as we know it. There are other discoveries that question the very same findings, and we see ourselves mixed in a cloud of belief and disbelief when a potential history-changing discovery is made.

One such discovery—controversial according to many authors—was made in the dense jungle of Guatemala where a certain Dr. Oscar Rafael Padilla Lara obtained a photograph of a MASSIVE head looking skywards, nearly devoured by surrounding vegetation. The massive head displayed characteristics not native to the region.

The massive megalithic head was photographed in 1950s by the owner of the field where the head was allegedly found. The photograph was eventually sent to Dr. Padilla, but Padilla never managed to contact the owner of the land as he died, leaving Padilla with only a photograph and a mysterious giant head, lost somewhere in the jungle of Guatemala.

Dr. Padilal also happens to be a lawyer and a UFOlogist, as well as the author of the Encyclopedia ufológica de Guatemala (1999).

As noted in an article written by Philip Coppens, the story about the massive head was first printed by the Ancient Astronaut Society newsletter Ancient Skies, in 1987. The article was accompanied by a photograph of the monolith which was as controversial as it gets.

The head seen in the photographs displayed features not native to the local population: thin lips, and a large sharp nose, leaving an overall Caucasian interpretation.

The massive stone head was apparently carved with its eyes wide shut, but where they open the head would be looking towards the sky.

The size of the monolith can be calculated thanks to the man sitting on top of the head and a car that’s located next to it.

Padilla wanted to find the massive head at all costs and set out on a journey to do so. After showing the image to a native of the region, Padilla found out that the monolith was supposedly located on one of the properties of the Biener family. However, which property it was, remained a mystery.

Eventually, Padilla found the statue, but to his surprise, it was nearly completely disfigured, after being used as target practice by local militants. As noted by Coppens;  “It was destroyed by revolutionaries about ten years ago. We had located the statue too late.

It was used as a target practice by anti-government rebels. This totally disfigured it, sort of like the way the Sphinx in Egypt had its nose shot off by the Turks, only worse. The eyes, nose, and mouth had completely gone. No doubt, the fact that the head had been carved from soft sandstone did not help; it had helped to make this face very smooth, but also very brittle. Padilla was able to measure its height as between 4 and 6 meters, with the head resting on a neck.”

Furthermore, the story disappeared as fast as it disappeared. However, it was picked up a few years ago by filmmakers behind “ Revelations of the Mayans 2012 and Beyond ” who claimed that this photograph was evidence that aliens had contact with ancient civilizations in the past.

Top verify said claims, the producer of the documentary published a document supposedly written by Guatemalan archaeologist Hector E Majia who stated: “I certify that this monument presents no characteristics of Maya, Nahuatl, Olmec or any other pre-Hispanic civilization. It was created by an extraordinary and superior civilization with awesome knowledge of which there is no record of existence on this planet.”

Whether or not this head is actually real remains a profound mystery. If it’s real, and Padilla’s accounts are based on facts, we may never know who built it or why, as the massive stone head is completely destroyed.

The exact whereabouts of the statue’s remains are unknown, and not a single archaeological mission was set out to search the area for more potential stone heads, and whether or not they have bodies buried beneath the surface.

Furthermore, if the massive stone head is real, given its uncanny features, it may hint at the existence of a long lost ancient civilization that inhabited the region long before ancient such as the Maya appeared in the region. Of course, there’s a chance that the entire story is fictitious, but, the massive stone head looks very real in the image that Padilla obtained.

Also, who would actually go through some much trouble to fake a massive head with strange features in the middle of a Guatemalan jungle? There’s also a good chance that the massive head was created in the 1900’s and was not the result of any long-lost civilizations.

What do you think?