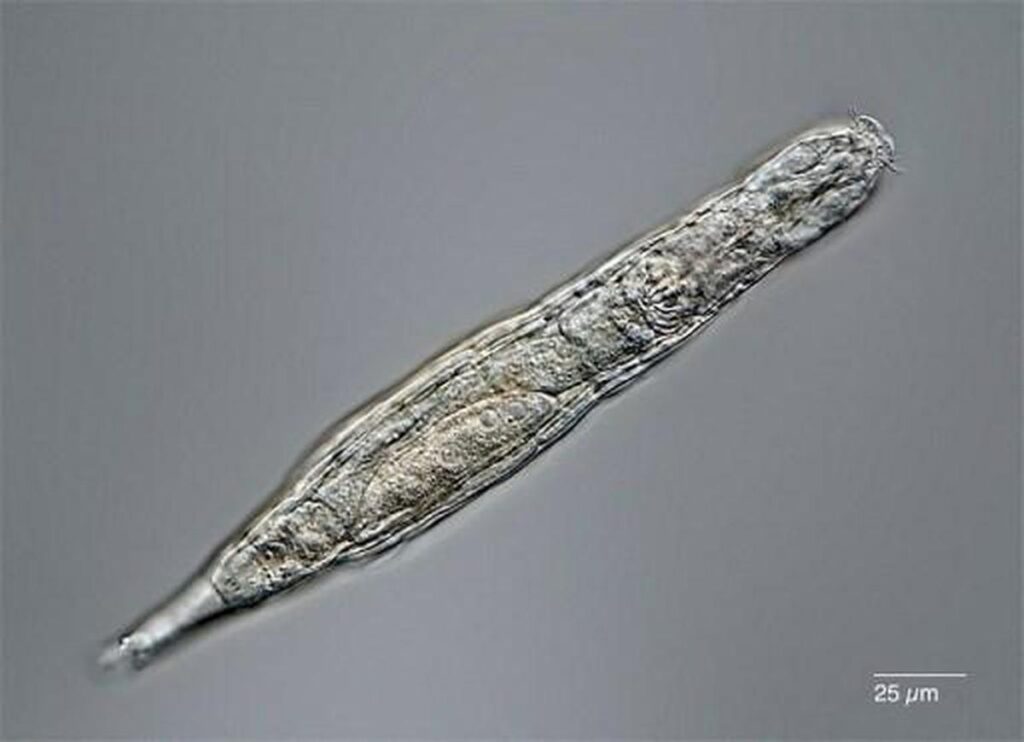 The tiny worm comes back to life after 24,000 years in the Siberian deep freeze

Bdelloid rotifers may be the toughest, tiniest animal you’ve never heard of. The microscopic, multicellular creatures have complex anatomies and are one of the planet’s most radiation-resistant animals. They can withstand extreme acidity, starvation, low oxygen and years of dehydration.

“They’re the world’s most resistant animal to just about any form of torture,” said Matthew Meselson, a molecular biologist at Harvard University.

Bdelloids can also come back to life after tens of thousands of years in deep freeze, according to a study published Monday in the journal Current Biology.

Bdelloids are one of a handful of teensy creatures, including tardigrades, that are known to survive incredibly inhospitable conditions. The new findings also show such robust micro-animals can endure extreme durations of suspended animation as well.

For the study, scientists collected samples by drilling about 11 feet below the surface of permafrost in northeastern Siberia. They discovered living bdelloid rotifers locked in the ancient permafrost, whose average temperature hovers around 14 degrees Fahrenheit.

“This is another example of the profound capacity rotifers have to endure extreme environments,” said Kristin Gribble, a scientist at the Marine Biological Laboratory in Woods Hole, Mass., who was not involved in the study.

Radiocarbon dating revealed the bdelloids were 24,000 years old. They then bounced back and were still capable of reproducing once thawed.

“We revived animals that saw woolly mammoths,” said Stas Malavin, a co-author and scientist at Russia’s Institute of Physicochemical and Biological Problems in Soil Science, “which is quite impressive.”

While the sample in which the rotifers were found also included surviving nematodes, or roundworms, it was already known that those creatures could survive tens of thousands of years in cryogenic preservation.

Scientists have previously regrown Antarctic moss and whole campion plants from samples and seeds frozen for hundreds or thousands of years. In 2016, a group of Japanese scientists successfully revived another resilient animal — the tardigrade, also known as a water bear — after 30 years of cryptobiosis, or suspended animation prompted by freezing, desiccation or other adverse conditions.

Until Monday’s paper, prior research on rotifers suggested they could survive deep freezes for up to a decade.

“We know for sure now it can withstand tens of thousands of years of cryptobiosis,” Mr. Malavin said.

Bdelloid rotifers are all around us — on moist strands of moss, in rain puddles and birdbaths, and across freshwater bodies spanning arctic and tropical regions and everything in between. They have been studied by scientists since the invention of microscopes. In 1702, Antony van Leeuwenhoek described them as “little round animalcules,” after spotting the creatures in gutter water from his house.

In the intervening centuries, scientists have carefully examined the complex organisms, which — despite the smallest being only a few dozen microns wide — are equipped with brains, guts, muscles and reproductive systems.

But scientists still don’t understand exactly how bdelloid rotifers are able to shield their cells and organs from seemingly catastrophic conditions and patch up broken DNA. Scientists have also been baffled about how the life form has been able to diversify to more than 450 species over millions of years seemingly by asexual reproduction alone, which is often considered an evolutionary disadvantage.

“I guess now we have more questions than answers,” said Nataliia Iakovenko, a co-author and zoologist at the Czech University of Life Sciences Prague who studies polar microscopic animals.

Unlocking these micro-animals’ super-resilient biological strategies could help us someday preserve other animal cells, tissues and organs here on Earth, and beyond — which is why scientists have sent both tardigrades and rotifers to space.

“They’re probably the only animals we know that could do pretty well in outer space,” Dr. Meselson said.