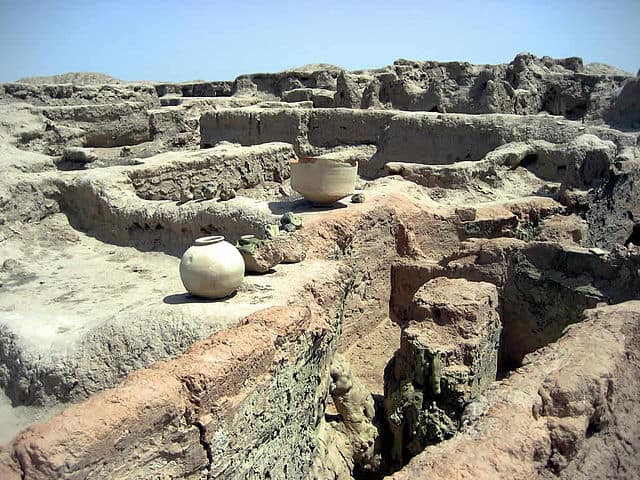 Have you ever heard of the Bactria-Margiana culture? It is believed that this civilization used to occupy a large territory, which included parts of present-day Afghanistan, Tajikistan, Uzbekistan, and Turkmenistan. Just around fifteen years ago, no one could have imagined that this culture would put historians in an awkward position. The fact is that by the beginning of the second millennium, the findings belonging to the Bactrian-Margian culture were attributed to the second or third millennium BC.

The news of this lost civilization began leaking out in the 1970s when archaeologists came to dig in the southern reaches of the Soviet Union and in Afghanistan.

Their findings, which were published only in obscure Russian-language journals, described a culture with the bizarre name Bactria-Margiana Archaeological Complex.

The Bactria-Margiana Archaeological Complex (or BMAC, also known as the Oxus civilization) is the name given to a Central Asian Bronze Age culture that dated to ca. 2300–1700 B.C. Bactria is the old Greek name for northern Afghanistan and the northeast corner of Iran, while Margiana is further north, where today are Turkmenistan and Uzbekistan. Through the region runs the Amu Dar’ya River, which was known in Greek history as the Oxus River. Much of the archaeological work was done in the Soviet era by Soviet scientists.

The Bactria-Margiana civilization occupied the region from the Neolithic until around 1700 B.C.; archaeological evidence indicates that their civilization was at its peak at around 2300 – 1700 B.C., boasting significant urban complexes with impressive walls and gates, monumental architecture, wheel-turned pottery, viticulture, and complex ceramics, tools, and jewellery.

In 2001, historians decided to do a more in-depth analysis of the findings, and this turned into a real shock. It turned out that artefacts containing characters that are considered ancient writing turned out to be older than the 6th millennium BC. It appears that the Bactrian-Margian culture is older than the Sumerian writing and Ancient Egypt by 1500-2000 years.

The most ancient Bactria-Margiana civilization is called the Kopet-Dag culture. Discover magazine wrote: “The ancient Oxus culture may have arisen at sites like Anau, a settlement at the base of the Kopet-Dag mountains, which dates back to 6500 B.C.

Later settlements like Gonur, roughly 4,000 years old, may have been founded by people from the Kopet-Dag cultures.”

In 2005, excavations were carried out on the territory of Turkmenistan. An ancient temple dating 8200 years old was discovered at the Gonur archaeological site. Surprisingly, it was built of brick and cement, quite a modern construction technique. But contemporary buildings are unlikely to stand for so many years, unlike ancient structures.

Some experts express the theory that the Bactria-Margiana civilization is the most ancient cradle of mankind. After all, if you turn on the logic, then we can assume that once in the 6th millennium BC, the inhabitants were able to create buildings using modern technology, which means that the culture itself is ancient. Bricks and cement still need to be developed.

The accumulated evidence ”puts the Central Asian Bronze Age on the same footing as other Old World civilizations,” said Carl Lamberg-Karlovsky, a head of Harvard’s Peabody Museum, in a 1990 interview.

The remains of Bactrian civilization, reflected in massive buildings with intricate layouts and skilful ceramic and metalwork, represent ”a very distinctive expression of Bronze Age culture, a complex urban society as developed as any of the others,” he said.

Some scholars even urged that Bronze Age Bactria should be added to the list of the four great original civilizations of the Old World: Egypt’s Nile Valley, ancient Mesopotamia, the Indus Valley, and the Yellow River of China.

Other scholars believed Bactria, which apparently did not develop writing and seems not to have formed an integrated state under powerful rulers, is less important than the four other early civilizations. Yet migrations from Bactria during its mysterious decline may have had a far-reaching influence on Iran and India.

Despite the recent research, the Bactrian people remain mysterious, and the spectacular archaeological findings in the area gained little attention in the West. The reason may be that the dramatic importance of Bactria only became clear with ”the slow emergence of the archaeological context over the last decade,” Lamberg-Karlovsky said. ”It hasn’t been the discovery of a single thing, like King Tut’s tomb.”

There is no doubt that the Bactria-Margiana culture is the most ignored ancient civilization that perhaps surpasses the other older civilization in terms of technology and art of building. What if this civilization existed before the Egyptians or Sumerians?