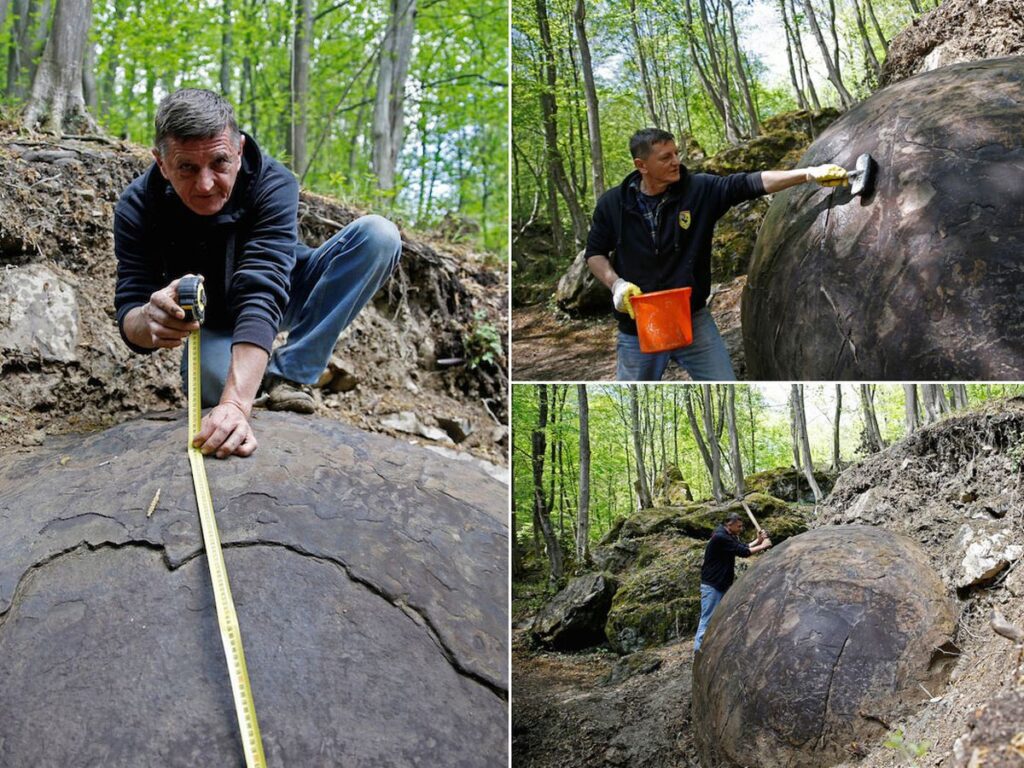 Most of the antiquity of humankind has either been discovered in the Middle East, Southern Asia, Africa, or the Mesoamerica region. Not many historians and archaeologists would agree that the European continent could be the home to one of the ancient civilizations of Earth. However, recent discoveries made in Europe point out a different hidden segment of Earth’s history that might surprise everyone. The 2016 discovery of a massive stone ball in Bosnia is still puzzling the scientists.

The huge half-buried stone ball with a diameter of more than 1.5 meters was discovered in Bosnia and Herzegovina in the Podubravlje forest near the town of Zavidovici. The mysterious ball was found by controversial archaeologist Semir Osmanagich.

According to Osmanagich, the ball was created artificially, which further reinforces his theory that a very advanced civilization once existed in Europe. Osmanagich is the same archaeologist who claimed in 2005 that the cluster of hills in Visoko, north of Bosnia’s capital Sarajevo is one of the oldest pyramids on Earth.

According to estimates, the Bosnia stone ball weighs about 30 tons, and its brown-reddish colour suggests it is partly composed of iron. Osmanagich said that it could be the oldest stone sphere made by humans. He believes that it proves the existence of an advanced lost civilization dating back more than 1,500 years ago.

Reports of strange stone balls began to surface in the late 1990s. Osmanagich said: “I’ve been researching prehistoric stone ball phenomenon for 15 years. By the mid of March 2016, it became obvious that the most massive stone ball in Europe has been discovered. He assured that Bosnia and Herzegovina was once strewn with hundreds of stone balls, but many were destroyed by people who believed that gold was hidden inside.”

In 2007, Osmanagic gave a more out-there account of the spheres. He said: “In Zavidovici, we were to examine supposedly as Semir stated to us, man-made (or alien made—descendants of an ancient civilization from the Pleiades) perfect spherical stone balls. These perfect spherical stone balls are used for energy and near the time of 2012, will be re-energized if human consciousness is elevated high enough to create a vibration sympathetic to those of the balls, and beams of cosmic energy will manifest.

The spherical balls have a purpose, that is, they are tools of super technology made from a natural material, emanating high cosmic vibrations that will attune us (humans ) to a higher dimension…However, Semir speaks quite differently now (after our visit to Bosnia) about the spherical stone balls than he did let’s say about 2 months beforehand and is more reserved about aliens and high technology stone spheres (he now states he does not know their purpose).”

Why does he view this discovery as significant? Phy.org writes: “First, it would be another proof that Southern Europe, Balkan, and Bosnia in particular, were home to advanced civilizations from distant past and we have no written records about them. Secondly, they had high technology, different from ours. Finally, they knew the power of geometrical shapes, because the sphere is one of the most powerful shapes along with pyramidal and conical shapes. No wonder, that pyramids and tumulus phenomena can also be found in Bosnia.”

Is Bosnia stone ball really the most mysterious?

Bosnia stone ball by no means claims to be the most mysterious. For more than 70 years, scientists have been puzzled over similar spherical stones from Costa Rica and other parts of South America. In the 1940s, they were discovered by workers cutting down thickets for banana plantations.

According to a 2010 publication of ScienceDaily, “around 300 balls are known to exist, with the largest weighing 16 tons and measuring eight feet in diameter. Many of these are clustered in Costa Rica’s Diquis Delta region.

Some remain pristine in the original places of discovery, but many others have been relocated or damaged due to erosion, fires and vandalism. Scientists believe the stones were first created around 600 A.D., with most dating to after 1,000 A.D. but before the Spanish conquest.”

Later, in Mexican silver mines, stone spheres were found similar to those in Costa Rica but even larger. The Sierra de Ameca is a range of hills a short distance west of Guadalajara.

The area was important in colonial times for gold and silver mining. One of the mines is called Piedra Bola (Stone Ball). The landscape immediately around this mine is so distinctive and unusual that it is featured on the cover of the August 1969 edition of National Geographic.

In the middle of the forest surrounding the Piedra Bola mine, there are about a hundred strange stone balls. They are almost perfectly spherical and range in diameter from about sixty centimetres to more than ten meters. These symmetrical boulders are unusually large. Nothing like them exists elsewhere in Mexico and few similar examples are known in the world.

Are the balls of natural formation?

Geologists did not exclude that the balls (both American and European) appeared naturally. But there is no consensus about their nature. Perhaps the balls are the so-called ferruginous nodules, which are formed during the compaction of sediments in ore and coal deposits. In the centre of the nodule, organic remains, mineral or bacterial accumulations are often found, which serve as a “seed” during its growth.

Some scientists emphasize that the concretion becomes spherical and grows evenly when substances are deposited in a rock that is equally permeable in all directions. And the ocean floor is called the ancestral home of the balls. Like, formed around the remains of shells, animal bones, and algae in soft sediments. And ended up on dry land when the sea bottom rose.

Samuel Lothrop, a staff archaeologist at the Museum of Archeology and Ethnography at Harvard University, was the first to carefully measure some stone balls from Costa Rica. He wrote in his report that the big balls were of the highest quality. They were so perfect that measuring the diameters with tape (in five directions) and a plumb line showed no difference. The archaeologist found only surface irregularities about 2 millimetres in size.