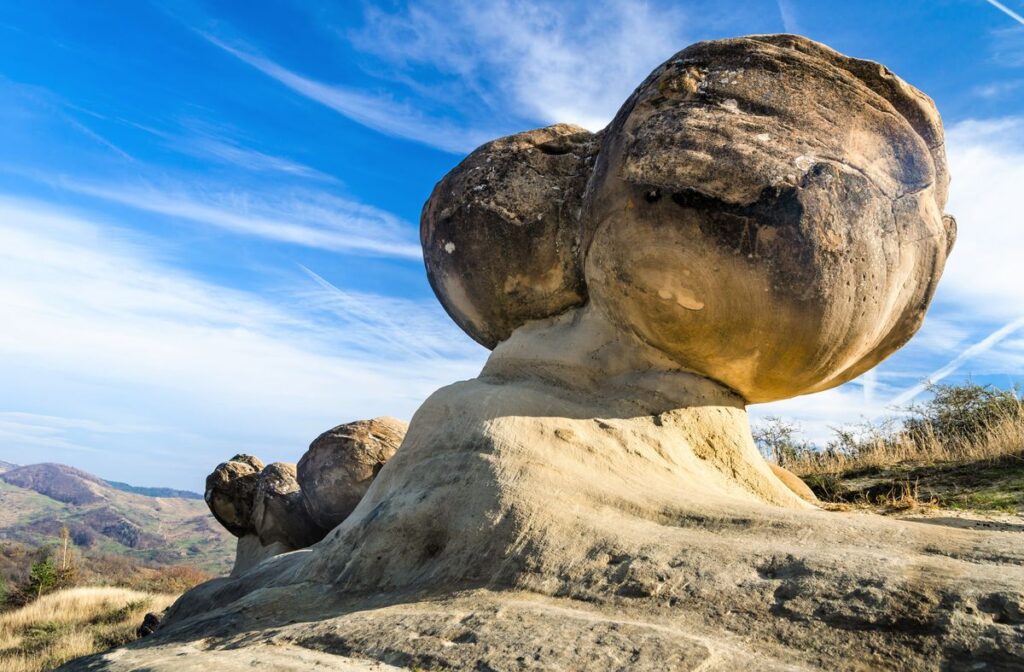 Trovants, the living stones of Romania: They grow, multiply and move!

There are strange places across the world. But these places make our planet such a wonderful and unique place. Among its many oddities and beauties, Earth has living stones.

Although not literally alive, there are geological features in Europe which have the ability to grow and move. It’s actually a natural phenomenon, and the most famous examples are located in Romania.

In the town of Costesti, there are odd rocks dubbed “living stones” that are locally known as Trovants. These strange, extraordinary, weird rocks seem almost out of a Hollywood movie; they can grow and multiply and essentially move.

Their name derives from the German words Sandstein Konkretion, which means sandstone concretion, or cemented sand. These stones can grow in size to a few millimetres, but as large as ten meters in diameter. Because of their ability to “grow,” these geological weirdos are dubbed the “living stones,” although different people call them by different names.

In Romania, the stones are called Trovants, which is a term coined by naturalist Gh. M. Murgoci, in his work “The Tertiary in Oltenia,” where he makes reference to the odd geological features.

For a long time, researchers have tried to demystify the “living stones” capable of autonomous movement. A lot of different versions have emerged and one even states that Trovants are “a silicon form of life.” It is also possible that they are conscious.

Some scientists even claim that Trovants are capable of breathing, of course, very slowly ― a single breath lasts from three days to two weeks. The “living stones” even have some kind of pulse, but it can be detected only with super-sensitive equipment. It turns out that these odd stones are able to move, even though only about 2.5 mm in two weeks.

The Romanian Village Of The Trovants

A whole “village” of the Trovants was found in Romania. They all have a circular, streamlined shape. Locals claim that the “living stones” are even capable of reproduction. In the beginning, a small outgrowth appears on the surface of the stone. It grows and grows until it falls off from the “mother” stone. The new stone is completely detached and starts to grow faster. The active growth is more visible right after rain.

Originally, scientists thought that this had something to do with the structure of the stones. But when they broke in half some specimens, they saw that the “living stones” consist of cemented sand and mineral salts.

Scientists have observed strange rings which resemble those of the trees. And just like it is with the trees, the stone rings reveal the age of trovants. That’s why some believe Trovants are an inorganic form of life.

Most Trovants are found in Romania, in the region of Costesti. There even exists a museum, in which the interesting stones are shown and sold as souvenirs. You can even “plant” a Trovant in your garden and wait for it to grow. The biggest Trovants grow to more than 10 meters in height.

“Living stones” can be found also in Russia. Massive round stones periodically pop up from the ground and start to grow in the fields of Andreevka. While Romanians venerate their Trovants, people in Andreevka worship theirs. Their ancestors thought that the stones possess the power of Mother Earth and if you touch them you could be gifted with strength and health.

Russian and Romanian Trovants consist of cemented stone. But they are unusually tough to break or smash. Usually, no one touches them, so they have the chance to grow from little pebbles to enormous megaliths.

Some Interesting Facts About Trovants

Trovants are always fascinating and mind-boggling natural worders that attract people from all over the world. Here are some interesting facts you should know about Trovants, the living stones:

For centuries the locals of Costesti were aware that some of the boulders in their region appeared to grow and might even be alive ― a thought that’s still a controversy. But if we are able to confirm that Trovants are able to breathe and reproduce, then we should really start considering them as living beings. Isn’t it?