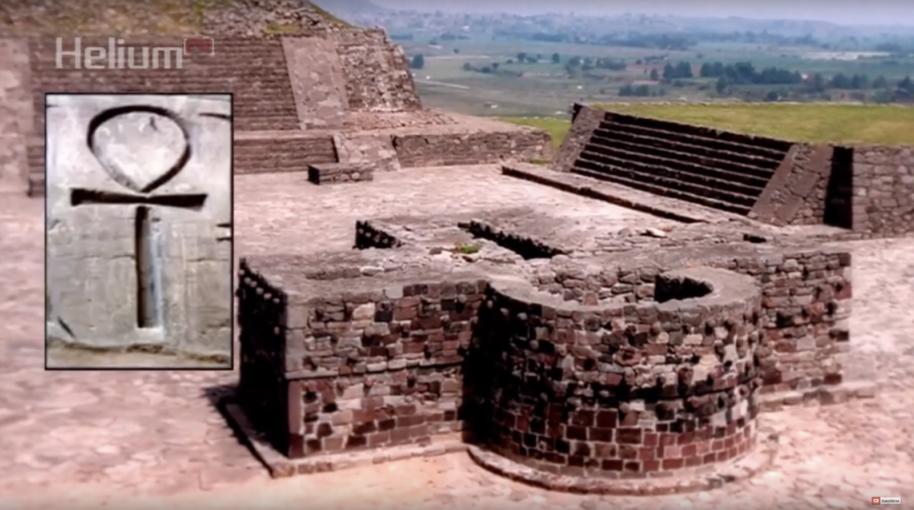 Calixtlahuaca, present-day Toluca has one of the most mysterious objects discovered in Mexico. Monument number 4, Cross Altar or Tzompantli share an incredible similarity to the Ankh cross in ancient Egypt.

The ankh also known as the key of life was the ancient Egyptian hieroglyphic character that read “life.” It actually represents the concept of eternal life, which is according to historians the general meaning of the symbol.

It is one of the most important ancient Egyptian symbols yet one of the most mysterious ones because the origin of the symbol remains a mystery to Egyptologists even today and not a single hypothesis has been fully accepted.

The symbol frequently appears in Egyptian tomb paintings and other art, often at the fingertips of a god or goddess in images that represent the deities of the afterlife.

A symbol similar to the ankh frequently appears in Minoan and Mycenaean sites, and it often appeared in coins from ancient Cyprus and Asia Minor, and it is also used to represent the planet Venus and the metal copper.

The symbol frequently appears in Egyptian tomb paintings and other art, often at the fingertips of a god or goddess in images that represent the deities of the afterlife.

A symbol similar to the ankh frequently appears in Minoan and Mycenaean sites, and it often appeared in coins from ancient Cyprus and Asia Minor, and it is also used to represent the planet Venus and the metal copper.

But What Is The Ankh Symbol Doing In Mexico?

The archaeological site of Calixtlahuaca is located at about 2,500 meters, and there are several monuments present at the site. Out of these structures, we pick out the Tzompantli structure. A Tzompantli s a type of wooden rack or palisade documented in several Mesoamerican civilizations.

It was used for the public display of human skulls, typically of war captives or other sacrificial victims. It is a scaffold-like construction of poles on which heads and skulls were placed after holes had been made in them. – Wikipedia

The Tzompantli present at Calixtlahuaca is a cross altar decorated with skulls, it had skulls carved in stone embedded in the structure.

Originally had more than ten, today there are only two original and the replica of a third. But what makes this construction so mysterious is that it resembles the Egyptian Symbol Ankh.

“The Aztecs and the Egyptians were parallel civilizations in many ways, despite having evolved on opposite sides of the Atlantic Ocean. Both cultures built pyramids, both used solar symbolism, and both believed in life after death, preparing their dead for a journey to the afterlife via an elaborate and highly-ritualistic ceremony.”

The similarity between some structures found at Calixtlahuaca when compared to some symbols and structures from Egypt is quite interesting.

This is why the “Ankh cross found in Mexico” is fascinating. Why would the Aztecs deliberately deviate from their conventional use of the “Tau” cross and modify it as they did in Calixtlahuaca by adding a loop, just like the Egyptians did?

To the Egyptians, the Ankh symbol was a very important glyph that was connected to the afterlife. The ancient Egyptians were extremely spiritual, and they firmly believed that a person continues to live in the afterlife. That is why the Ankh cross was so important to them.

In Central America, we have a similar story when we talk about the Mayas and Aztecs as they believed that a person would continue to live in the afterlife.

The TAU cross was inscribed on the forehead of every person admitted into the Mysteries of Mithras. When a king was initiated into the Egyptian Mysteries, the TAU was placed against his lips. It was tattooed on the bodies of the candidates in some of the American Indian Mysteries. To the Qabbalist, the TAU stood for heaven and the Pythagorean Tetractys. The Caduceus of Hermes was an outgrowth of the TAU cross. – Sacred Texts

There are many monuments at Calixtlahuaca that have not been excavated yet; there is plenty of work to be done on the site, and archaeologists are hoping to uncover more information about this ancient complex and its inhabitants.