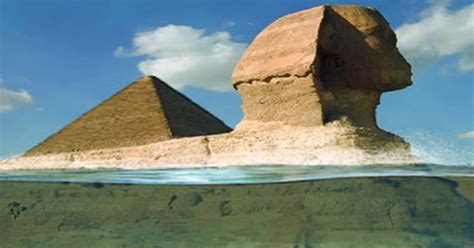 Apparently, the entire landscape of the Giza Necropolis, including the Pyramids and the Sphinx, displays signs of erosion. This has led researchers to suggest that certain areas of this mighty necropolis were once submerged under the sea and a newly discovered fossil makes this theory look a lot more believable. A pretty cool theory right? Well here is the story.

Archaeologist Sherif El Morsi, who has worked extensively on the Giza plateau for over two decades, and his colleague Antoine Gigal, were the ones who made the discovery of this controversial fossil, which backs up studies and theories that the Pyramids of Giza and the mighty Sphinx were once submerged under the sea. Sherif El Morsi and Antoine Gigal are the founders of “Giza for Humanity.”

Dr. Robert M. Schoch was one of the first researchers to really address the theory that the structures of the plateau are much older than previously thought.

In the early 90’s, Dr. Schoch suggested that the Sphinx was thousands of years older than archaeologists believed, dating back to 5000-9000 BC, this suggestion was based on the erosion patterns of water found at the monuments and the surrounding rocks.

Archaeologist Sherif El Morsi has been researching and looking into the mystery ever since. During one of the photoshoots documenting patterns of erosion of several megaliths in the area, he made an even more surprising discovery that suggests that the entire area was submerged at one moment.

“During one of the documentations of the ancient coastline, I almost tripped with a block of the second level of a temple,” said Mr. Morsi in an article published on the website Gigal Research.

“To my surprise, the bump on the top surface of the block that almost tripped me was in fact an exoskeleton of a fossil of what appears to be an echinoid (sea urchin) which are marine creatures that live in relatively shallow waters.”

Sherif El Morsi suggests that the Giza plateau was once flooded by a surge. The temple site of Menkare, in particular, may have been a former lagoon when the sea level covered the Necropolis, the Sphinx, the complex of temples and other monuments of the area.

But there are several other theories which different scientists have suggested. Some researchers believe that the echinoid found on the limestone was actually exposed by erosion and the fossilized creature was part of the original limestone that had formed 30 million years ago.

But Morsi responded to these claims in an interesting way and suggested that the creature was cemented, or petrified, in a relatively recent time, citing evidence that the creature was found placed gravitationally on the floor, that the fossil was in almost perfect condition and was located within the intertidal range of the lagoon, which is a big contrast to the small fish typically found in limestone blocks.

“We can clearly see the pristine condition and the details of the perforations of the exoskeleton, this means that the sea creature must have been petrified in recent times.” – Sherif El Morsi

According to El Morsi, the flooding, was quite significant, peaking at about 75 meters above current sea level and creating a coastline spanning to the Khafra enclosure near the Sphinx at the temple of Menkare.

El Morsi also believes that there is evidence present at the monuments and surrounding blocks that suggest the presence of tidal waves in the past and even suggests an intertidal zone of about two meters.

The Sphinx, the temple of the Sphinx, and the first 20 fields of the Great Pyramid of Giza exhibit erosion due to deep water saturation according to El Morsi.

Dating the exact time of the flood is particularly difficult for researchers since, in the last 140,000 thousand years, sea levels have fluctuated by over 120 meters.

Certainly, this is a very interesting theory and we look forward to finding out more about the possibility of the Giza Plateau being submerged underwater.