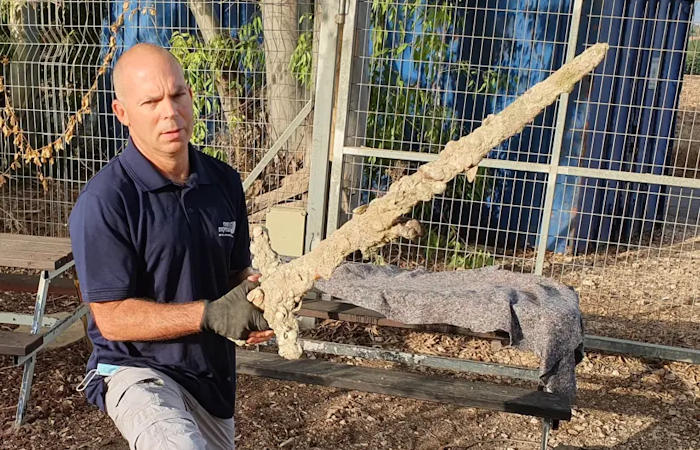 A 900-Year-Old Crusader Sword Discovered Off The HaCarmel Coast, Israel

About 900 years ago a crusader knight who was present in the Holy Land lost a magnificent sword. Today, we can admire this precious ancient artefact that gives us the opportunity to travel back in time and a catch glimpse of important historical moments.

On October 16, 2021, Shlomi Katzin was scuba diving off Israel’s HaCarmel coast when he discovered ancient artefacts uncovered by the ocean waves and undercurrents.

According to Nir Distelfeld, Inspector for the Israel Antiquities Authority’s Robbery Prevention Unit, “the iron sword has been preserved in perfect condition and is a beautiful and rare find. It evidently belonged to a Crusader knight.

It is exciting to encounter such a personal object, taking you 900 years back in time to a different era, with knights, armor, and swords.”

As written before on AncientPages.com “Knights Templar are surrounded by secrets and legends. They were a powerful, wealthy medieval organization that has fascinated historians, writers and the public for many centuries.

Their Order was one of the most powerful monastic societies in Europe and the military pride of the church during the Crusades.

In 200 years they created the most important Christian organization in the world. Most prominent monarchs of medieval Europe, who considered themselves powerful, feared someone else even more powerful – the Knights Templar.

They symbolized the holy fight of Christians against infidels and heretics.”

According to one Muslim chronicler, the Knights Templar Order represented “the fiercest fighters of all the Franks”. The discovery of a Knights Templar sword is an exciting find allowing us to learn more about the crusaders’ activities in the Holy Land.

Kobi Sharvit, director of the Israel Antiquities Authority’s Marine Archaeology Unit adds “The archaeological finds at the site show that it served as a small, temporary natural anchorage for ships seeking shelter.

Identification of the various finds shows that the anchorage was used as early as the Late Bronze Age, 4,000 years ago. The recent discovery of the sword suggests that the natural cove was also used in the Crusader period, some 900 years ago.”

“Every ancient artifact that is found helps us piece together the historical puzzle of the Land of Israel. Once the sword has been cleaned and researched in the Israel Antiquities Authority’s laboratories, we will ensure it is displayed to the public.”