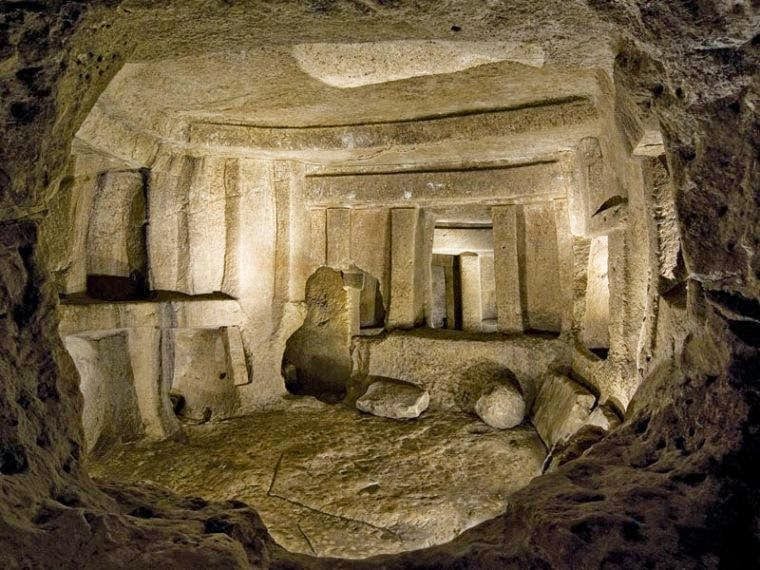 The only known prehistoric underground temple worldwide is located in Malta. Dating back to 5.000 B.C, “Hypogeum of Hal Saflieni” or simply “Hypogeum”, from the Greek word hypo (under) and gaia (mother earth) is an underground construction, which consists of interconnecting chambers in three levels.

Hypogeum, carved into 2.000 tons of stone, was discovered in 1902 by construction workers while working on the foundations of a building. The first excavator of this underground construction was Fr Emmanuel Magri.

He worked there between 1904 and 1906, but his notes were lost after his death in Tunisia. Magri was succeeded by Sir Themistocles Zammit in 1911. Archaeologists believe Hypogeum was used until 2500 B.C.

Although its original purpose is unknown, they are sure that it was used as a burial place. Further excavation of the Hypogeum revealed the first and oldest level, which consists of a large hollow with burial chambers on its sides. Its main entrance used to be on the surface.

A doorway leads to the second level, filled with impressive carved stones in different shapes, pentagons and floral patterns in red ochre.

The deepest level consists of the “Main Room” and other rooms: the “Decorated room”(a richly decorated chamber), the “Snake Pit”(used for either keeping snakes or collecting alms), the “Holy of Holies”, and the “Oracle Room”. Researchers have made extensive studies on the acoustic properties of the last chamber.

Any sound made in this room is heard all throughout Hypogeum and can affect human emotions. But there is a lot more in this superb prehistoric structure.

When it was discovered, more than 7.000 skeletons were found in the chambers near the entrance. The photos of Dr Anton Mifsud and his colleague Dr Charles Savona Ventura testify to their existence.

Further examination of the skulls showed that, due to peculiar abnormalities, they were elongated, and one lacked the Fossa median.

There was also found a small statue of a sleeping goddess, with a snake inscription on it.

Research suggests that these skulls belonged to people with a natural genetic tendency for elongated skulls.

Until 1985, a number of these strange, lengthened skulls were exposed in the Archaeological Museum in Valletta. Today, there are only 7 skulls.

The rest of them have disappeared, along with the 7.000 from Hypogeum and haven’t been recovered since then. Hypogeum first opened to visitors in 1908.

Since then, hundreds of people keep visiting it every year. Although only small groups of visitors are allowed in it, in order to maintain temperature and humidity at required levels, booking a Hypogeum tour and seeing the past through the eyes of our ancestors looks like an overwhelming experience.

This place is full of inexplicable mysteries that remain unsolved, which makes it even more fascinating and attractive to visitors.