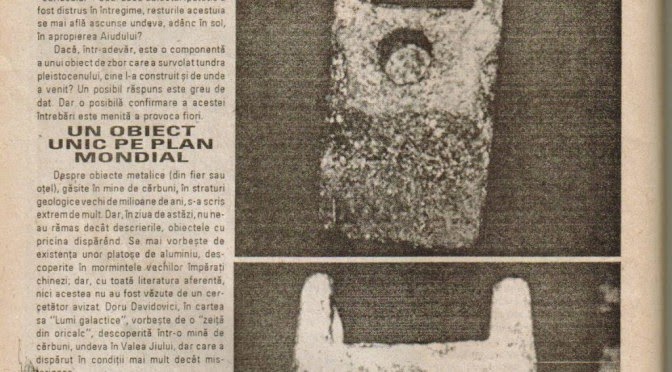 The Aluminum Wedge of Aiud is a wedge-shaped object found two kilometres east of Aiud, Romania, on the banks of the Mures River in 1974.

The object was reported to be unearthed 35 feet underground and alongside two mastodon bones. A mastodon is an extinct large-tusked mammal species.

Physically, the artefact looked similar to the head of a hammer. The wedge was taken to the Archeological Institute of Cluj-Napoca to be examined, where it was found to be made of an alloy of aluminium encased in a thin layer of oxide.

The alloy of the wedge is composed of 12 different elements. This artefact is considered strange because aluminium was not discovered until 1808 and was not produced in quantity until 1885.

Aluminium requires 1,000 degrees of heat to be made. The fact that the wedge was found in the same layer of the earth as mastodon bones would make it at least 11,000 years old.

Many people have claimed that the artefact is proof that aliens visited Earth. Engineers have reported that the object resembles the foot of landing gear, not unlike the technology used on spaceships.

The scientific community believes the wedge was made on earth and its purpose is not yet identified. Due to the limited amount of information that exists on the subject, the antiquity and origin of the artefact are unclear.

The Aluminium Wedge of Aiud is not on display to the public and remains in an undisclosed location.

The object was allegedly taken to the Archeological Institute of Cluj-Napoca to be examined, where it was found to be made of an alloy of aluminium.

The wedge was also encased in a layer of oxide no less than a millimetre thick, which is said to indicate an age of at least 300 to 400 years old. It is not mentioned what dating technique was used.

According to the article mentioned above, by Boczor Iosif, it was examined a second time in Lausanne, Switzerland, with the same results. It was not mentioned which establishment carried out this second analysis.

Florin Gheorghita, for one, had the opportunity to examine the report, and the analysis performed under the direction of Dr. Niederkorn of the institute for the study of metals and of non-metallic minerals (ICPMMN), located in Magurele, Romania, emphasized that it is composed of an alloy of extremely complex metal.

Gheorghita affirms that the alloy is composed of 12 different elements, of which he has succeeded to establish also the volumetric percentage of the aluminium (89%).