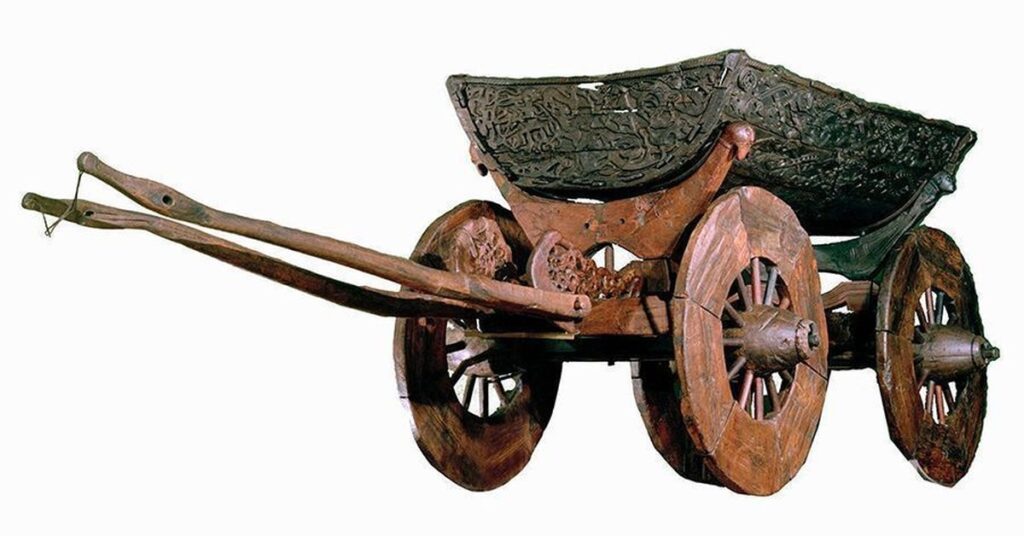 The exceptionally well-preserved wagon was found in a burial mound in Oseberg near the Oslo Fjord in Norway. The artefact that is commonly known as the “Oseberg cart” was found inside the Oseberg Ship and is the only complete Viking Age wagon ever found.

The ship, which dates from the mid-9th century and is regarded as the most sumptuous relic of a Viking burial, was found in a burial mound in Oseberg near the Oslo Fjord in Norway in 1903.

The ship’s interment into its burial mound dates from 834 AD, but parts of the ship date from around 800, and the ship itself is thought to be older. Inside, archaeologists found the bones of two women who were buried in the mid-9th century.

Judging by the rich furnishings, one was probably a queen, while the other may have been her slave or servant. The ship, which is widely celebrated and has been called one of the finest finds to have survived the Viking Age, is on display at the Viking Ship Museum in Bygdøy, along with some of its contents.

Although the grave had been disturbed in antiquity and precious metals were absent at the time of discovery, a great number of everyday items and artefacts were found inside the ship during the 1904-1905 excavations. These included, apart from the richly carved four-wheel wooden cart, bed-posts, wooden chests and many pieces of furniture, tapestries, and kitchenware such as an iron cooking.

One of the most interesting objects discovered inside the Oseberg ship is the so-called Buddha-bøtte or Buddha bucket – a pail with two identical figures seated in the Lotus position forming the joints of the pail handle. According to Viking Rune, Vikings could in fact meet Buddhist missionaries during their expeditions, as evidenced by a sixth-century Buddha statuette from northern India found on the island of Helgö, Sweden (currently on display in the Swedish Museum of National Antiquities in Stockholm). That said, the Oseberg Buddha does not seem to have been imported from Asia, but most probably originated from Ireland or England, according to researchers. But then, who is the person represented on the bucket, if not Buddha from Asia? Is it a meditating Viking? A Norse god? This remains a mystery.

More mundane items such as agricultural and household tools were also found inside the Oseberg burial. It is also one of the few sources of Viking age textiles and, as already noted, the wooden cart is the only complete Viking age cart found so far.

In Denmark and Germany remains of similar carts have been found, almost without exception in wealthy women’s graves. So far, no one has been able to establish with certainty what they were used for.

The ornament carvings on the object show animals, people and symbols, while the backside is decorated with cats. According to one hypothesis, these are the same cats that draw the fertility goddess Freyja’s wagon and the carriage may have been used for religious ceremonies.

The scene on the front of the cart shows a man struggling with snakes that surround him on all sides, while a four-footed beast is biting him on one side – most likely an illustration of the myth of Gunnar in the snake pit.

More difficult to interpret is a scene in the middle of the upper board showing three people. Some belief it to be a scene from a saga or an old legend.

The New Oseberg Ship Foundation has built an exact replica of the Oseberg cart and the experienced craftsmen have also put forward a theory about what it was used for.

According to construction Manager Geir Røvik, who has spent much time researching the original, it was intended for wealthy women who were transported to and from the ship.

“The wagon may have functioned as an amphibious craft. The ship was maneuvered as close to the shore as possible and the wagon transported the women to and from land,” Røvik told Båtliv magazine in 2013.

Among the details that made Røvik ponder were the large wheels – likely to get across the water – in addition to the “crib” where the lady could sit, possibly making the wagon watertight. Further supporting the theory is the fact that the upper part of the cart can easily be removed and has frame handles. In fact, the whole cart can be swiftly disassembled to be transported by ship, and, contrary to what was previously believed, it is also able to turn – something that also suggests everyday use.

“This theory that the wagon has been a landing craft is just speculation, but from what we can observe, there is much suggesting this,” according to Røvik.

Since the Oseberg ship’s construction allowed navigation in waters only a few feet deep, Rovik’s theory is indeed workable. But regardless of its actual use, the Oseberg cart is definitely unique in one regard: it’s one of the most complete and magnificent Viking artifacts ever found on this planet.