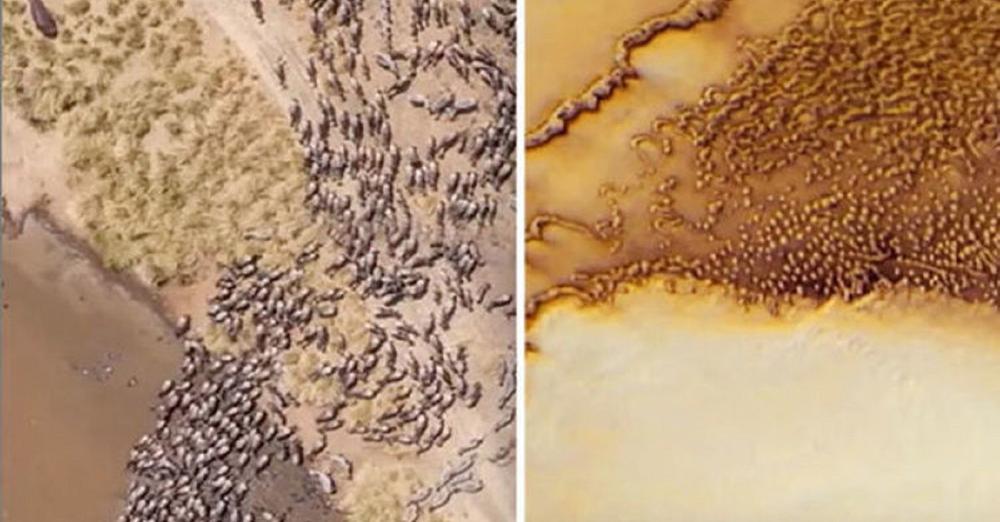 Herds of animals and forests on Mars? Researchers suggest it

Mars, the so-called red planet, has always been full of mysteries and present in controversy, and the last thing is that it could be “full of life”.

“Images taken and released by NASA seem to reveal a whole thriving ecosystem on its surface.”

Conspiracy theorist Neal Evans believes this is evidence that there is life on Mars, along with an environment capable of supporting it. As he said in a statement:

“I think this is a prosperous and habitable ecosystem on Mars. I studied the section of the map for hours and compared it to aerial views of places on earth, and it appears to be next to the north pole. ”

“The images are all low resolution, but you can see lines of clear water, lakes, either vegetation or some kind of life that seems to depend on the water source.”

Logically, users were totally surprised by the images shown, and their similarity to groups of animals that we can see on Earth. One commentator stated: “It is difficult to begin to imagine what is out there, and what discoveries will be made in the times to come.”

Evans added: “I have been studying Mars and its history for years, we only know what they let us know.

“It’s hard to say if this could be a new life or a prosperous new life, my guess is from what I have planned, it could be a new ecosystem like prehistoric life on early Earth that naturally formed or had an inexplicable good start”.

“Mars is a treasure trove of ancient history, if Mars was erased due to a nuclear impact, it was done for some reason.”

For its part, NASA claims that life simply does not exist on Mars. This is something that some unconventional researchers have taken as a cover-up of the truth, in the face of hundreds of pieces of evidence of possible life on the red planet.

According to NASA, Mars lost its atmosphere to solar storms that occurred billions of years, and therefore lost all its oceans, and could not support life today.

However, studies carried out ensure that there are traces of surface water and groundwater, which could support simple life forms, however, the space agency has not revealed more than that.

Although there is a possibility that what we see in the images are only structures that are part of the Martian terrain; there are multiple pieces of evidence that have been previously revealed by other researchers, showing signs of possible life on Mars.

Can everything be explained as pareidolia or is it that they are hiding the truth from us?