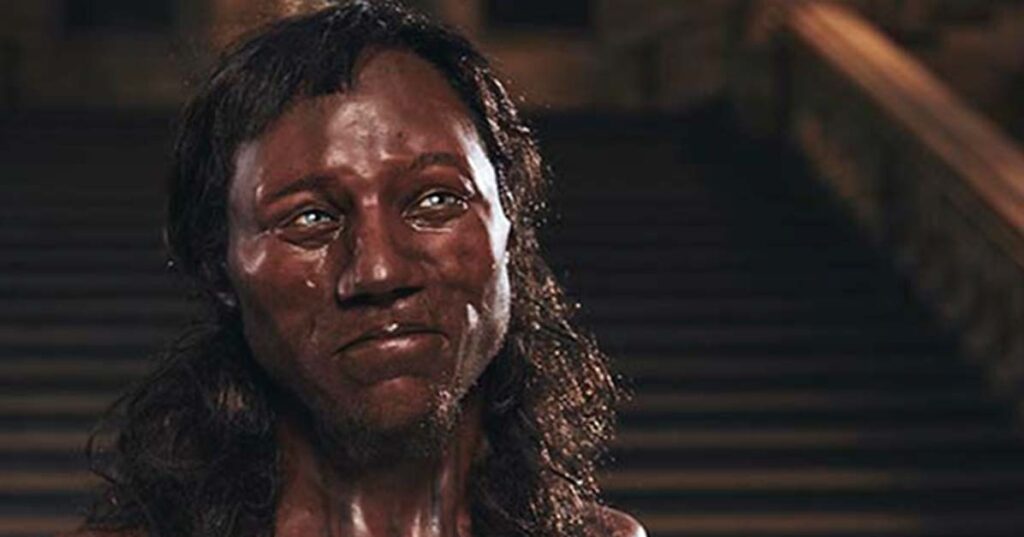 A 10,000-year-old hunter had “dark to black” skin, a groundbreaking DNA analysis of Britain’s oldest complete skeleton has revealed. The Cheddar Man fossil was unearthed in Gough’s Cave in Somerset over a century ago.

Archaeologists determined at the time that he was one of the first settlers to have crossed Doggerland, the land bridge from continental Europe to Britain, after the glaciers began receding at the end of the last ice age.

According to scientists at London’s Natural History Museum Cheddar Man was about five foot five inches tall (1.65 meters) and around 10 stone (63.5 kg) in weight, he had good teeth and died in his early 20s. It was “luck”, however, that they found “scraps of DNA in his ear” stated archaeologists at the museum this week.

But even having obtained a tiny dna sample “coaxing data from ancient DNA can be painstaking work” said Dr Selina Brace, who specializes in ancient DNA at the Museum and worked closely on Cheddar Man.

However, using new genetic sequencing technology that wasn’t available ten years ago, the team located the genes linked to skin and hair color and texture, and eye color and discovered he had a “dark to black” skin tone and “blue eyes.”

Speaking of this remarkable discovery, the lead researcher in human origins at the Natural History Museum, Dr Professor Chris Stringer, announced to reporters this week “The combination of quite dark skin and blue eyes is something that we don’t imagine is typical, but that was the real appearance of these people, something that’s quite rare today.”

So, how did Britons get from being black to pinky-white? And, why aren’t modern Africans also white?

Scientists believe that northern European peoples became lighter-skinned over time because pale skin absorbs more sunlight. Elaborating on this phenomenon, Dr Tom Booth, a postdoctoral researcher with the Natural History Museum’s human remains collection said this week, “Until recently it was always assumed that humans quickly adapted to have paler skin after entering Europe about 45,000 years ago.”

These results provide answers to many historical mysteries. Until this discovery, it was suspected that waves of migrants might have been seeded from the same population in mainland Europe, but the latest results suggest this was not the case.

According to archaeologists at the Natural History Museum , Cheddar Man has Middle Eastern origins suggesting his ancestors left Africa for the Middle East and later headed west into Europe.

We now know the genes for lighter skinned European populations spread far later than originally thought, and, that the people who founded the Britons looked pretty much like the Paleolithic African hunters, from whom all humans are believed to have descended.

What is probably the most interesting fact established in these findings is that people of white British ancestry alive today, are direct descendants of this black population.

Dr Yoan Dieckmann, from University College London, who took part in the project, told the Telegraph: “What may seem as a cemented truth that people who feel British should have white skin, through time is not at all something that is an immutable truth…it has always changed and will change.”

At a time when race issues so often dominate our headlines, the potential ways in which a writer can conclude an article of this nature are endless, but I feel it would be too obvious, predictable and cheap to sign off with some smart one liner directed at European racists, rubbing their black origins in their white faces.

Alternatively, I will make an observation which transgresses race. It is becoming clearer that one of the most powerful and paradigm changing effects our developing technologies will have on human culture is that, one day very soon, the ancient suspicions of gurus, shamans, priests, priestesses and oracles and all the other ‘non-scientific’ leaders in history, will be proven to be accurate, in one regard. Technology, is making it very apparent that we are indeed – all one.