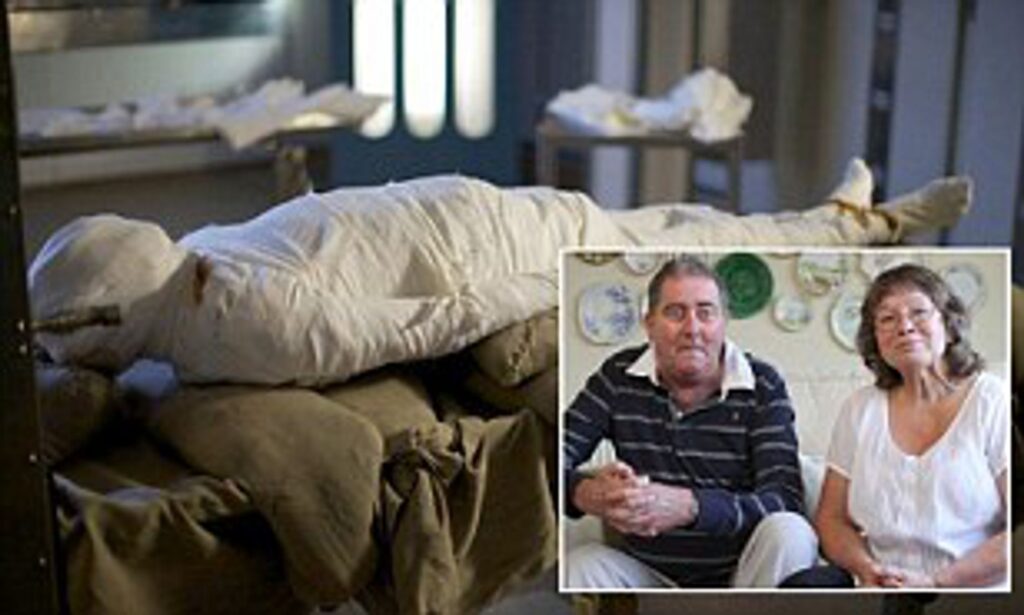 A former British taxi driver has become the first person in the world for 3,000 years to be mummified in the same way as the pharaohs. Channel Four viewers will see Alan Billis turned into a mummy over the space of a few months as his body is preserved using the techniques which the ancient Egyptians used on Tutankhamun.

Billis had been terminally ill with cancer when he volunteered to undergo the procedure that a scientist has been working to recreate for many years.

The 61-year-old from Torquay in Devon had the backing of his wife Jan, who said: “I’m the only woman in the country who’s got a mummy for a husband.”

The process is revealed in a new documentary Mummifying Alan: Egypt’s Last Secret to be screened next Monday, October 24.

Dr Stephen Buckley, a chemist and research fellow at York University, has spent 19 years trying to uncover the preservation techniques which the Egyptians used during the 18th dynasty.

Alongside archaeologist Dr Jo Fletcher, Dr Buckley has studied mummified bodies, analysing tissue samples and finally putting his findings into practice by putting them to the test on Mr Billis’s body at Sheffield’s Medico-Legal Centre.

“It’s turned current understanding, including my own, completely on its head,” said Dr Buckley.

Billis had been diagnosed with terminal lung cancer when he heard about the search for a body donor.

“I was reading the paper and there was a piece that said ‘volunteer wanted with a terminal illness to donate their body to be mummified,” he told the documentary team.

“People have been leaving their bodies to science for years and if people don’t volunteer for anything nothing gets found out.”

Billis – who dubbed himself “Tuten-Alan” – continued: “Experimenting is all about trying different processes to make things work. If it doesn’t work it’s not the end of the world, is it? Don’t make any difference to me, I’m not going to feel it. It’s still bloody interesting.”

“And I thought here we go again. What’s going to go on now? It’s just the sort of thing you would expect him to do.”

Dr Buckley has used specialist scientific equipment such as a gas chromatograph mass spectrometer to identify materials which were used by priests, including beeswax, oils and resins.

He went on to conduct a series of experiments using pigs’ legs as a substitute for human flesh, rigging up makeshift desert conditions in his shed.

Billis’s internal organs – including his lungs and intestines – were removed through an incision in his side, and the sterilised cavity was padded with linen, although the brain was left in place. Then the body’s moisture content was removed using a caustic salt from the region, called natron which was described by the Greek historian Herodotus in 450BC – 800 years after the 18th dynasty.

The scientists then immersed the corpse in a salt bath for more than a month to draw out the water. And to protect the skin from the harsh salt it was covered in a special protective layer of oils.

The body was then wrapped in linen – like the classic image of a mummy – protecting it from light and insects, and his wife made a visit, leaving favourite photographs and drawings by his grandchildren.

After three months of drying, the process was judged to be complete.

Leading forensic pathologist Professor Peter Vanezis, who was also part of the team of scientists, said: “The skin itself has this leathery appearance which indicates that he has become mummified all over. It makes me very confident that his tissues have been mummified correctly and in a very successful manner.”

Dr Buckley was pleased with the results of the natron bath, particularly the preservation of the brain.

The scientists believe the results may help in developing an alternative to formaldehyde in the preservation of tissue.

Channel 4 said the experiment had a scientific purpose and had not been done for sensationalism.

A spokesman said: “This is a serious scientific project, the result of a two-decade academic investigation to rediscover and replicate how the ancient Egyptians preserved their greatest pharaohs for thousands of years.

“The research may also offer an alternative to the preservation of tissue using formaldehyde, which has been found to be carcinogenic.

“The donor gave full consent to take part and his family is very happy with the mummification process and the programme.”

Billis’ family said they had given their full support. A statement issued on their behalf said: “Alan found out about this project when he was diagnosed with terminal cancer, and the project gave him something to focus on during his final months.

“As a family, we were all supportive of his decision and have been overwhelmed by the care and attention he has received since his death. We would like to thank all involved for making his wish possible, and for making this such a positive experience.”

The body will be kept at the Sheffield Medico-Legal Centre until the end of the year and it is hoped it will be used for further study into mummification and decomposition.