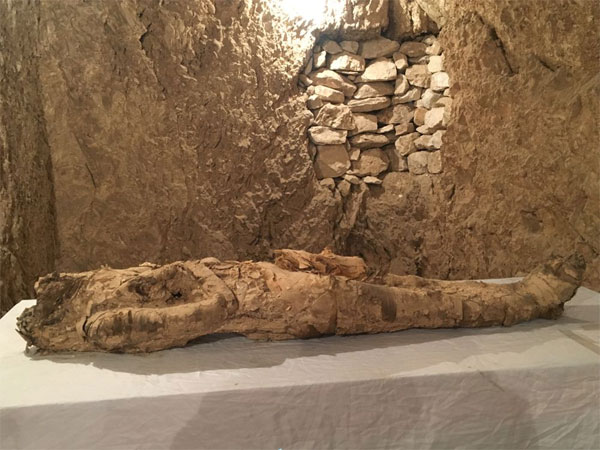 Two tombs of unidentified officials dated to Egypt’s New Kingdom era have been opened at Luxor’s Draa Abul-Naglaa necropolis years after they were initially discovered by German archaeologist Frederica Kampp in the 1990s.

The opening of the tombs was announced at an international conference attended by the governor of Luxor, the minister of social solidarity, the director-general of the International Monetary Fund, members of the international media, foreign ambassadors, members of parliament, and Minister of Antiquities Khaled El-Enany.

“It is a very important discovery because both tombs contain very rich funerary collections, and one of them has a very distinguished painted statue of a lady in the Osirian shape,” with this most recent discovery being the third Draa Abul-Naga alone.

“It seems that our ancient Egyptian ancestors are bestowing their blessing on Egypt’s economy as these discoveries are good promotion for the country and its tourism industry,” El-Enany told Ahram Online.

Mostafa Waziri, the secretary-general of the Supreme Council of Antiquities and head of the Egyptian excavation mission, explains that both tombs were given special numbers by German archaeologist Frederica Kampp in the 1990s.

The first tomb, named “Kampp 161,” was never excavated, while excavation work on the second, “Kampp 150,” was undertaken by archaeologist Kampp short of entering the tomb itself.

The tombs had been left untouched until excavation started during the recent archaeological season.

Most of the items discovered in Kampala 161 are fragments of wooden coffins.

The most notable discoveries are a large wooden mask that was originally a part of a coffin, a small painted wooden mask, a fragment of a gilded wooden mask in poor condition, four legs of wooden chairs that were among the deceased’s funerary equipment, as well as the lower part of a wooden Osirian shaped coffin decorated with a scene of goddess Isis lifting up her hands.

“The owner of Kampp 150 is not yet known, but there are two possible candidates,” Waziri told Ahram Online.

He said that the first possibility is that the tomb belongs to a person named Djehuty Mes, as this name is engraved on one of the walls.

The second possibility is that the owner could be the scribe “Maati,” as his name and the name of his wife “Mehi” are inscribed on 50 funerary cones found in the tomb’s rectangular chamber.

The tomb has only one inscription on one of its northern pillars. It shows a scene with a seated man offering food to four oxen, with the first kneeling in front of the man, who is giving it herbs. The scene also depicts five people making funerary furniture.

The objects uncovered inside include 100 funerary cones, painted wooden masks, a collection of 450 statues carved in different materials such as clay, wood and faience, and a small box in the shape of a wooden coffin with a lid.

The box was probably used for storing an Ushabti figurine 17 cm tall and 6 cm large. Also found was a collection of clay vessels of different shapes and sizes, as well as a mummy wrapped in linen with its hands on its chest in the Osirian formStudies, suggest that the mummy, which was found inside the long chamber, could be of a top official or another powerful person.