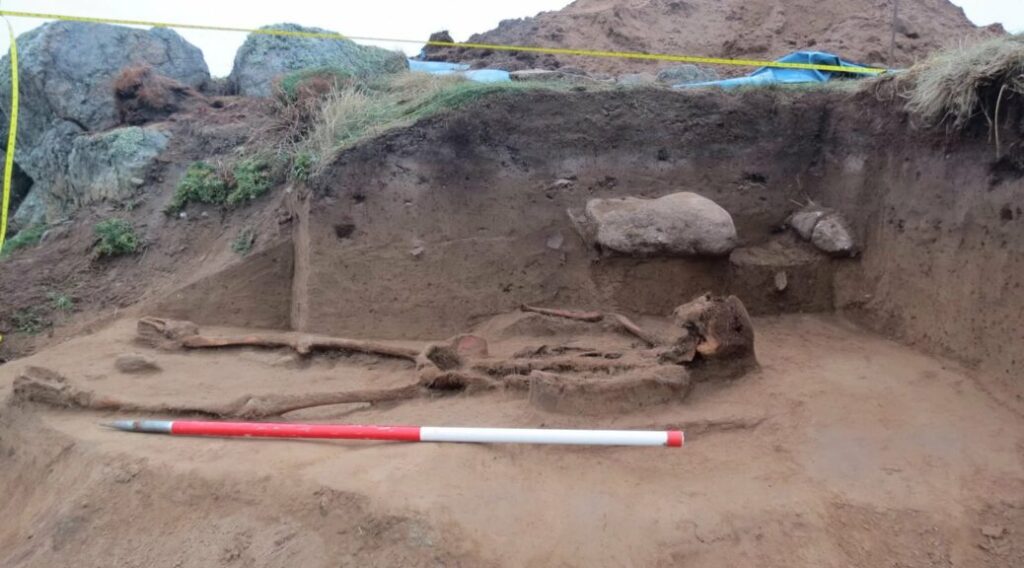 The body of a man without hands thought to have been buried hundreds of years ago has been found by archaeologists on a rocky islet off the coast of Guernsey, one of the British Channel Islands — just a few feet from where a mysterious medieval skeleton of a dolphin was found last year.

Phil De Jersey, a Guernsey government archaeologist, said the skeleton of the handless man appeared to have been buried much later than the baffling burial of that dolphin skeleton on the same islet, and therefore the two burials probably aren’t related.But he said that the latest find added much to the mystery of the rocky islet of Chapelle Dom Hue.

The islet lies about 900 feet (300 meters) from the west coast of Guernsey, overlooking the sea and the stones of a Neolithic burial ground on the mainland of the island.

Though Chapelle Dom Hue is only about 50 feet (10 m) across today — so small that the sea at high tide cuts it into two pieces — archaeologists say it was once larger; during the medieval period, the islet was home to a colony of a few reclusive Christian monks, they said.

The archaeological team first thought the skeleton found this year might have been that of a monk who had suffered from leprosy, which might account for the missing wrists and hands, De Jersey told Live Science.

But some details of the remains of the man’s clothes — especially the shirt buttons — made the researchers think that the body was buried in the 16th or 17th century, well after Chapelle Dom Hue was occupied by monks.”Our working hypothesis at the moment is that this is a drowning, or a body washed up,” De Jersey said.

“It was given a quick but relatively respectful Christian burial at the spot where it got washed up on that island.”

Last year, De Jersey reported that his team had found a dolphin skeleton that appeared to have been buried on the island sometime during the Middle Ages when monks had lived there.

The carefully buried skeleton perplexed the archaeologists because it might have easily been just dumped in the sea a few yards away, without the trouble of a burial.

The dolphin carcass, De Jersey said, might have been buried with salt to preserve it for eating, and then forgotten; or perhaps it was regarded as a holy animal — although his research has not revealed why a dolphin would be regarded as holy at that time and place.

Subsequent studies of the dolphin skeleton tended to confirm that it was buried on the islet in the early 1400s, but no further light had been shed on the mysterious burial, he told Live Science.

The human burial on the island had come to light in the last few months as a small cliff had weathered away, about 30 feet (10 m) from the site where the dolphin skeleton had been found, he said. Eventually, the weathering revealed the upper part of a foot and toe bones.

Archaeologists then excavated the site and found the remains of a man about 5 feet tall, but without any hands or wrist bones.

De Jersey now thinks the human body washed up on the islet and was buried there some time in the 1500s or 1600s.

The hands of bodies that have drifted at sea are often eaten by fish; in fact, the skull of the body showed signs of damage that could have happened when it drifted up among rocks on the shore. The lower part of the left arm is also missing, but “the feet have survived relatively well, perhaps because it had some sort of footwear,” he said.

The archaeological team will try to get a radiocarbon date on the skeleton, but the remains of a few buttons on his shirt suggest that it was later than the medieval period.”

Buttons in the early medieval period were quite rare and unusual, and these look to me like something later that might have been part of a sailor’s dress,” he said. So far, the dolphin and human skeletons are the only skeletal remains found in the islet of Chapelle Dom Hue, but De Jersey won’t rule out the possibility that there still may be bones to find: “There is not a huge amount of space over there left to find more things, but who knows?”

“There was a little bit of excavation done there by an archaeologist in the 1890s,” De Jersey said. “He wrote about it, and said that he didn’t think it was worth going back there again because there was nothing more to be said about the place — and I quite like that because, really, how wrong could he be?”