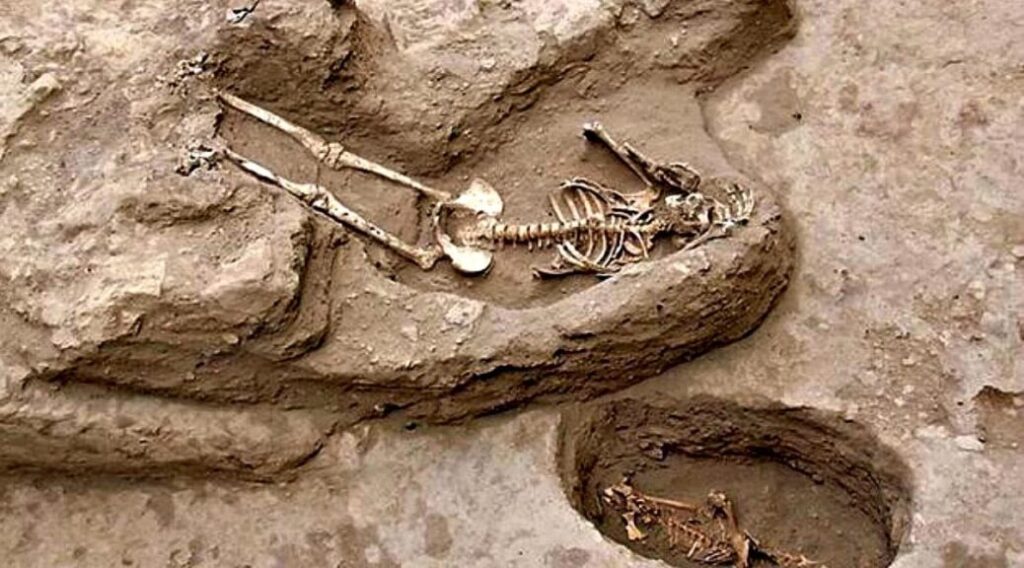 In a 1,200-year-old ceremonial temple in Peru, archeologists have unearthed the remains of six women, believed to be connected to the Lambayeque culture, who appear to have been killed in a ritual sacrifice at a secret compound.

According to PeruThisWeek.com, the six women were most probably ritually killed in a secret part of the temple, where archeologists also found remains of llama and ceramics. The bodies were buried beneath the ancient temple in the Pucalá district of Peru. All of the women had been positioned into unusual shapes so that their heads were facing the Andes mountain range.

Edgar Bracamonte, the head of the Peruvian group of archaeologist told Daily Mail : “We have discovered a temple around 1,200-years-old and which was a secret enclosure that priests used to sacrifice women to their gods.

It was used for private ceremonies. It has platforms and a central ramp that was covered with earth, where they left a large quantity of offerings. We found six buried women in different places.’”

The Lambayeque culture, also known as the Sican culture, dominated the north coast of Peru between 750 and 1375 AD, probably succeeding the Moche culture. The Lambayeque built large religious cities dominated by huge temples.

As Edgar Bracamonte said for Daily Mail : ”What caught our attention was the unusual position of a young woman of around 24-years-old. She was positioned in the center of the ramp together with a llama and ceramic pots. This finding is very important because it reveals to us a close relationship between the Mochicas and the Lambayeque culture.”

The unusual sacrifices predate the spread of the Inca civilization by several hundred years and the bodies were found at a temple that was once part of the Lambayeque culture. Moreover, the discovery proved the connections between different pre-Inca civilizations.

The bodies had been placed in the same direction, and were surrounded by artifacts that show similar rituals present in the Moche, Wari and Cajamarca civilizations.

The recent discovery at Pucalá is reminiscent of another finding made in 2013, in which Polish archeologists discovered a massive royal tomb full of mummified women . The analysis of the bodies provided clues about the enigmatic Wari empire that ruled the Andes before the Incas.

It was the first time that archeologists had discovered an imperial tomb of the Wari culture. The mausoleum, located at a coastal pyramid site called El Castillo de Huarmey, 185 miles north of Lima, contained gold pieces, ceramics and 63 skeletons that dated back about 1,300 years.

Most of the mummies were women sitting upright and buried with finely engraved ear pieces made of precious metal that were believed to be used only by men.

Around the royals were six skeletons which were lying on their bellies, in an extended position with their limbs arranged in different directions. The skeletons were not wrapped in textiles and appeared to have been sacrifices for the mummified elite.

The reason behind the human sacrifices of the Lambayeque culture , which are primarily connected with women, and less frequently with men, has remained a mystery for archeologists. At a site known as Huaca Loro, 24 sets of human remains belonging to females aged between 18 and 25 years were found.

The women had been sacrificed, possibly to accompany the elite males into the afterlife. However, at the site of Huaca Las Ventas, most of sacrifice victims were men. It is theorized that they were volunteers who were engaged in a ritual of the celebration of death.