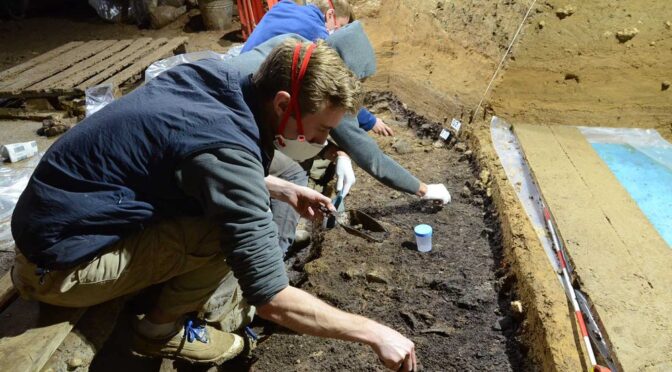 Forty-five thousand years ago, some of the first modern humans to call Europe home lived in and around Bulgaria’s Bacho Kiro Cave. They created adornments, like beads and pendants of cave bear teeth. They fashioned stone and bone tools and colored them with red ochre. They hunted, butchered and feasted on local animals.

Artifacts of this lifestyle were left scattered in the cave, but these ancient humans left little evidence of themselves. Just a single tooth and a few tiny bits of bone survived to the present day. Yet those fragments contained enough genetic material that scientists have now recreated some of the humans’ stories, revealing surprising information about both their ancestors and their descendants.

Only the Bacho Kiro individuals have living descendants and they’re found in surprising places—in East Asia and the Americas. The ancient humans from both ancient European sites do share one common ancestral strain—a healthy dose of Neanderthal DNA.

Among the Bacho Kiro humans, evidence seems to show that when modern humans moved into Europe they commingled with Neanderthals longer, and later, than is commonly believed.

In 2015, scientists working in the Bulgarian cave found human fossils along with thousands of bones from butchered animals, and an assemblage of Paleolithic artifacts. A single molar stood out as unmistakably human, but the rest of the bones were broken bits that had to be identified as human by using protein mass spectrometry, which can spot uniquely human protein sequences not found in bones of other species.

The human bones were then radiocarbon-dated to between 42,580 and 45,930 years before present. Researchers also produced tiny bits of tooth and bone powder from which they could extract DNA and sequence the genomes of three different individuals who once called the cave home.

While their age suggests these individuals were among the earliest modern humans to live in Europe, their DNA reveals that they have little relation to humans now known as European.

“Interestingly, these earliest Europeans that we find in the Bacho Kiro Cave did not contribute substantially to later West Eurasians,” says Mateja Hajdinjak, of the Francis Crick Institute (London), co-author of the study published this week in Nature.

“These groups got largely replaced in Western Eurasia by subsequent migrations of people. But they are closely related to the human groups that gave rise to later East Eurasians and Americans—including present-day populations.”

“It’s just really cool that fossils of three individuals in Bulgaria left behind DNA, and can trace their descendants to different parts of the world than we’d expect, in ancient and living East Asians and Native peoples of the Americas,” adds Rick Potts, director of the Smithsonian’s Human Origins Program, who wasn’t involved in the genetic research.

The genome study also shows that a thick branch on the Bacho Kiro humans’ family tree belongs to the Neanderthals. The individuals carry 3 to 3.8 percent Neanderthal DNA in their genes, which suggests more than a one-off mating far back in their family history. In fact, the genomes show that these European humans had Neanderthal ancestors just six or fewer generations back.

“The Bacho Kiro Cave individuals provide further evidence that the admixture with Neanderthals must have been common when they had a chance to meet, since all of them had Neanderthal ancestors very recently in their family histories,” Hajdinjak says.

A second study published in Nature Ecology and Evolution tackled the intriguing skull of a single modern human female from the Zlatý kůň Czechia site that was found in the early 1950s—and has confounded some researchers during the years since.

Any context of exactly where in the cave it was buried or with which artifacts it was found are long lost. Radiocarbon dating has failed due to contamination. The study’s analysis turned up cattle DNA, the likely result of animal glue once used to help preserve the skull, so the skull’s true age is unknown.

But DNA was well preserved in the skull, and genetic sequencing studies have revealed some interesting things about this mysterious woman. This individual shows substantial Neanderthal ancestry of three percent, and the segments of Neanderthal genome present are exceptionally long. “This is a good indication that you had very recent admixture with Neanderthals,” says Kay Prüfer, who studies archaeogenetics at Max Planck Institute for Evolutionary Anthropology.

Prüfer and co-authors of the new study speculate that because the strands of surviving Neanderthal DNA are longer than those in a very old existing modern human genome, the 45,000-year-old Ust’-Ishim individual known from Siberia, this individual could be of similar age or even older.

Unlike with the individuals at Bacho Kiro, DNA analysis hasn’t been able to shed much light on what happened to this group of humans who lived in ancient Czechia. “It looks like its own little branch of the populations that trace their ancestry to those people who left Africa 50,000 to 60,000 years ago,” Prüfer says. “We don’t really detect any directly descended populations among people who are living. Why did they not leave their mark?”

Genetic studies suggest that the Europe of this era was the scene of a complex set of early migrations in which unrelated, distinct groups of early humans split off from the common ancestors who left Africa. They settled across Europe and encountered the Neanderthals already living there.

Many of these modern human stories seem to have hit evolutionary dead ends. The Zlatý kůň individual doesn’t seem to contribute to later human groups, nor do others of the handful of examples sequenced so far, like the 45,000-year-old Ust’-Ishim from Siberia and the 40,000-year-old Oase 1 from Romania

“Not all fossil humans represent ancestors of living populations, or populations that left genetic descendants,” says Rick Potts. “That may be more the rule than the exception and the genomics is really highlighting that.”

Interbreeding between humans and Neanderthals may not have been all that exceptional either, during the several thousand years that the two species coexisted in Europe. “These new studies point to multiple pulses of H. sapiens dispersals across Eurasia, perhaps with different archaeological signatures, and multiple interbreeding events with the Neanderthals,” says Chris Stringer, a paleoanthropologist at the Natural History Museum (London) unaffiliated with the research.

It’s not known exactly where, when, or how often our early human ancestors commingled with Neanderthals. Often, the interbreeding wasn’t successful for Neanderthals; most of their genetic variants didn’t stay around.

But Stringer theorizes that early modern populations could have acted like sponges, occasionally absorbing pockets of Neanderthals though limited local interbreeding in places like Eastern Europe. Perhaps that helped to cause the demise of Neanderthals as a viable population, but they didn’t completely disappear.