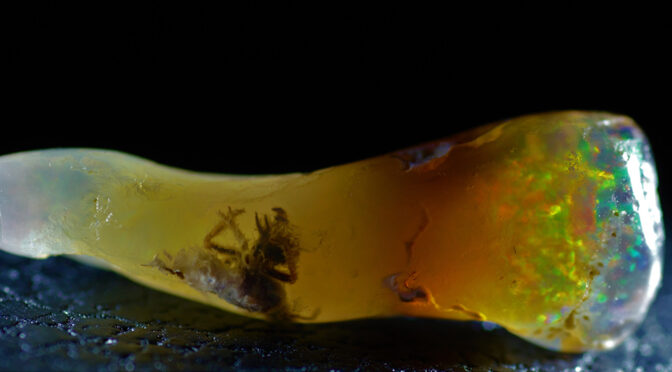 Fossilized Insect Discovered Not in Amber, But in Opal

A piece of opal from Java Island, Indonesia,  holds some remarkable cargo: a stunningly preserved insect that may be at least four to seven million years old.

Amber has long been prized for not only its lush, fiery hues but its elaborate contributions to Earth’s fossil record. As Vasika Udurawane writes for Earth Archives, the petrified tree resin starts out as a viscous liquid, slowly hardening over millions of years and preserving the entrapped remains of creatures that find themselves caught up in the process.

Up to now, scientists have collected amber fossils featuring such lively scenes as a spider attacking a wasp, an ant beleaguered by a parasitic mite and even a lizard seemingly suspended in mid-air—or rather mid-amber.

To date, most scientists believe that such high-quality fossil specimens are unique to amber, Gizmodo’s Ryan F. Mandelbaum reports. But an intriguing find by gemologist Brian Berger could upend this notion, proving that the slow-forming gemstone opal is also capable of preserving the remains of ancient animals.

Writing in a blog post for Entomology Today, Berger explains that he recently purchased an opal originating from the Indonesian island of Java.

Dotted with a rainbow of colours—from amber-Esque shades of yellow and red to neon green and dark blue—the gemstone is impressive in and of itself. Add in the insect seemingly entombed within, however, and the opal transforms from a precious stone into a significant scientific discovery.

“You can see what appears to be a complete insect encased beautifully inside,” Berger notes. “… The insect appears to have an open mouth and to be very well preserved, with even fibrous structures extending from the appendages.”

According to Gizmodo’s Mandelbaum, it’s possible the bug was trapped in amber that then underwent a process known as opalization. Much like fossilization turns bone into stone, opalization can render organic specimens opals’ hapless prisoners.

Michelle Starr of Science Alert points out that researchers currently have a limited understanding of opal formation. Right now, the dominant theory involves silica-laden water, which flows across sediment and fills cracks and cavities in its path. As the water evaporates, it leaves behind silica deposits, starting a process that repeats until an opal finally forms.

In Indonesia, home of Berger’s specimen, opalization takes on an added twist. Volcanic fluid, rather than simply water, races over the Earth and fills faults. As the fluid cools down, water contained within leaves behind silica deposits, launching the lengthy journey of opal formation.

It’s worth noting, according to Starr, that opalization appears to require a hollow cavity. Amber, however, does not fit these parameters, leaving scientists puzzled over how the opal in question if it indeed started out as amber, came to be.

Ben McHenry, senior collection manager of Earth sciences at the South Australian Museum, tells Starr that the specimen could share similarities with opalized wood, which is a common occurrence in Indonesia.

In an interview with Gizmodo’s Mandelbaum, Ryan McKellar, curator of invertebrate palaeontology at the Royal Saskatchewan Museum in Canada, adds that Berger’s opal reminds him of a specimen featuring wood partially embedded in resin.

The section of the wood covered in amber was preserved much like a fossilized insect, but the other side, exposed to the natural environment, transformed into petrified wood.

Moving forward, Berger hopes to recruit an entomologist or palaeontologist better equipped to study the unusual opal and its insect resident.

As Science Alert’s Starr notes, the gemologist has already submitted the stone to the Gemological Institute of America, which issued a report authenticating the specimen as “unaltered, untampered precious opal, with a genuine insect inclusion.”

Reflecting on the find’s potential significance in an interview with Starr, Berger concludes, “If the process of formation is correct, from tree sap with an insect through a sedimentary process, to copal, to amber, to opal it could mean the insect has the possibility to be one of the oldest ever discovered.”