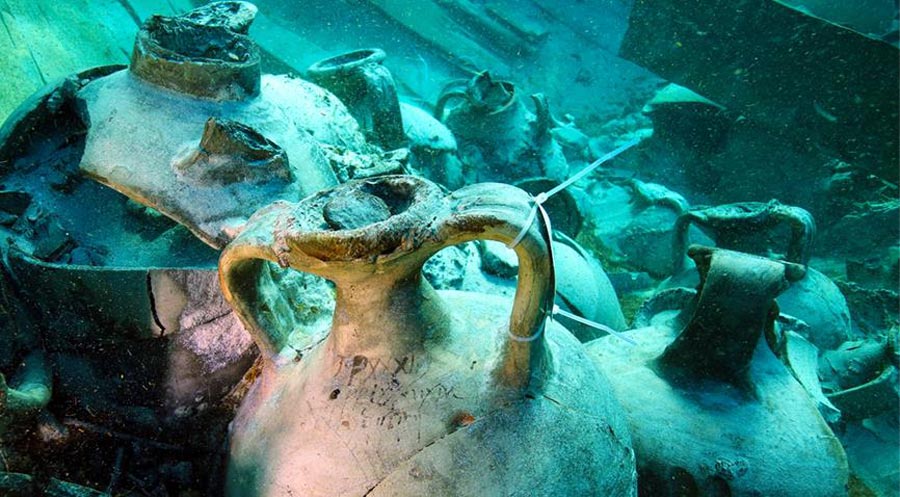 In 117 AD, at the time of Caesar Trajan’s death, the Roman Empire had reached its territorial peak, stretching across the Mediterranean Sea to North Africa and Western Asia. And the Romans used ships for much of the things that were sold to or bought from their distant colonies.

As a result, shipwrecks in Mediterranean Sea waters from the Roman era are common. Now another Roman cargo shipwreck, known as the Ses Fontanelles, has been found just off one of the busiest beaches in Mallorca, Spain reports The Guardian.

Dated to the 4th century AD, this incredibly well-preserved Roman cargo ship was carrying hundreds of amphorae of wine, olives, oil, and garum (fermented fish sauce). During a stopover at Mallorca, en route from southwest Spain to Italy, the ship anchored in the Bay of Palma when ferocious waves came and swallowed the vessel, burying it under the shallow seabed.

The Roman cargo shipwreck was first spotted in the summer of 2019. The ship was measured to be roughly 12 meters (39 feet) long.

Particularly surprising was the fact that this ancient shipwreck lay 50 meters (164 feet) from a very busy beach, with its contents only 2 meters (6.5 feet) below sea level. This very touristy beach just off the Balearics welcomes millions of visitors every year, but shockingly, none of the shipwreck artefacts were ever touched after the ship sank.

In the Guardian article Jaume Cardell, the head of archaeology at the Consell of Mallorca said, “The aim is to preserve everything there and all the information it contains, and that couldn’t be done in single emergency intervention. That’s where the project Arqueomallornauta comes in: it’s about recovering and preserving both the wreck and its historical cargo.

This isn’t just about Mallorca; in the whole western Mediterranean, there are very few wrecks with such a singular cargo.”

Researchers from the universities of Barcelona, Cadiz, and the Balearic Islands signed a Memorandum of Understanding (MoU) with the Consell of Mallorca for an inter-university 3-year project called Arqueomallornauta, which will be active till 2023.

The thrust of the project is “analyzing maritime traffic in Majorca in Late Antiquity through underwater findings” as per a press release by the University of Cadiz.

Late Antiquity, or the period between 284 and 700 AD, coincides roughly with the resolution of the Roman Empire’s crisis of the 3rd century, its collapse at the hands of the barbaric tribes, and the early Muslim conquests.

The first part of this MoU was put into action between the months of November 2021, and February 2022, with the excavation of the contents of the ship’s cargo.

The finds were described as “…frankly exceptional, since they have made it possible to fully discover the cargo of the ship, which sank in the middle of the 4th century AD, in an excellent state of conservation,” said the research team.

This exceptional Roman cargo ship find will shed new light on the condition of the Mediterranean in the 4th century and provide insights into the lives of crew members of such ships. Just consider these artefacts found on the Mallorca Roman cargo shipwreck: a leather shoe, a rope shoe, a cooking pot, an oil lamp, and a carpenter’s drill (the fourth ever found in this entire region).

There were no human remains of the boat’s crew, however, which suggests that they might have made it to the coast or were swept away by the waves.

An Unparalleled State of Preservation

The best part? The sand created a natural barrier against oxygen, allowing for incomparable preservation of the boat’s organic materials. “Things have been so perfectly preserved that we have found bits of textile, a leather shoe and an espadrille. The most surprising thing about the boat is just how well preserved it is – even the wood of the hull … It’s wood that you can knock – like it’s from yesterday,” said Dr Miguel Ángel Cau, an archaeologist at the University of Barcelona.

“It’s important in terms of naval architecture because there are very few ancient boats that are as well preserved as this one,” added Dr Darío Bernal-Casasola, an archaeologist at the University of Cádiz. “There are no complete Roman boats in Spain.” He also notes that the amphorae are still so well preserved that the remains of the contents, the structure of the jar, and the inscriptions on them all remain perfectly intact, calling it an “improbable subaquatic archaeological hat-trick.”

Human Lives Illuminated: The Trading Elite and the Crew

Historian Enrique García Riaza from the University of the Balearic Islands made it clear that this wreck is proof of how important the Balearic archipelago was to the Roman Empire, particularly as a staging post between the Italian and Spanish parts of the Mediterranean.

The elites of the Balearic would have had extensive social and economic relationships with the elites of places like Cartagena and Tarragona.

The crew of the ship were likely Roman pagans, evidenced by the pagan symbol of the moon goddess Diana on an oil lamp found on the wreck. However, some of the ship’s amphorae were imprinted with Christian seals. This would mean that the crew itself was pagan but that the ship carried Christian cargo.

Once the hull of Mallorca’s latest Roman cargo ship is recovered, the plan is to put the ship and its cargo on display, for everyone to see. For the same purpose, conservationists and specialists are being invited to prepare a special report.

The archaeologists are particularly grateful because they acknowledge how easily this find fell into their laps, and the state of preservation only suggests that this is a once in a lifetime find.