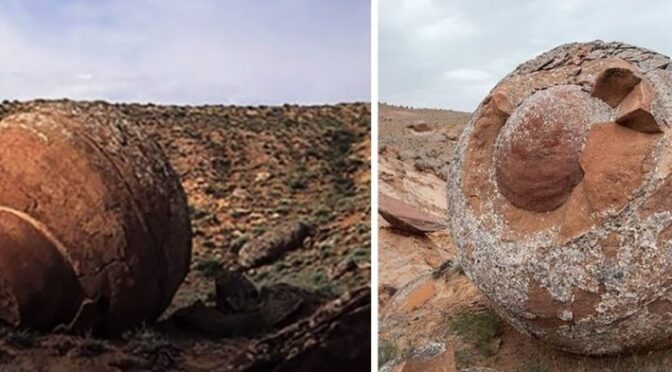 A Valley in Kazakhstan Home to Countless Massive Stone Spheres

Close to the town of Shetpe in Western Kazakhstan lies the Valley of Balls – or Torysh, as it is known in Kazakh. It consists of numerous ball-like rock formations strewn across a wide range of steppe land. The balls range in size from tiny marble-like rocks to huge boulders the size of a car.

The Torysh Valley in Kazakhstan is home to a unique landscape. Scattered across the surface are countless stone spheres of different sizes.

It’s as if in the distant past, it rained massive spheres from the heavens. The unique Kazakhstani spheres are found in the southwestern part of the country, amidst mountains, valleys, deserts, and tundra.

The spheres are believed to be more than 150 million years old, and they are unusual not only because of their age but by their shape and impressive size. Some of the Spheres are as large as a car, while some spheres are only a few centimetres in diameter.

How they came into existence is also exciting and is the result of scientific facts mixed with folklore or even legends.

Scientists say the region is home to a geological wonder and that the spheres most likely date back from the Jurassic to the early Cretaceous period, between 180 and 120 million years.

Furthermore, it is thought that the stone spheres are composed of silicate or carbon cement.

The researchers that travelled to Kazakhstan to study the spheres believe they are the result of massive concretions. However, alternative researchers hold that these massive stone spheres are the ‘ancestors’ of more recent spheres discovered in Costa Rica and Bosnia and Herzegovina.

Those who believe they are not naturally made argue the massive stone spheres of Kazakhstan result from long-lost civilizations that existed on Earth before written history.

But the truth is that the valley of spheres is poorly reached.

Nonetheless, there could be various geological explanations ranging from megaspherulites – crystalline balls created in volcanic ash and then exposed by weathering – to cannonball concretions – a process where an area’s sediment tends to accumulate around a more rigid core.

In addition, some argue that the speeches are also the result of a process called spheroidal weathering, where the conditions are perfect for eroding rocks, giving them a spherical form.

However, since not all the spheres in the enigmatic valley are of the same size, researchers believe the stone ‘balls’ are most likely the result of megaspherulites.