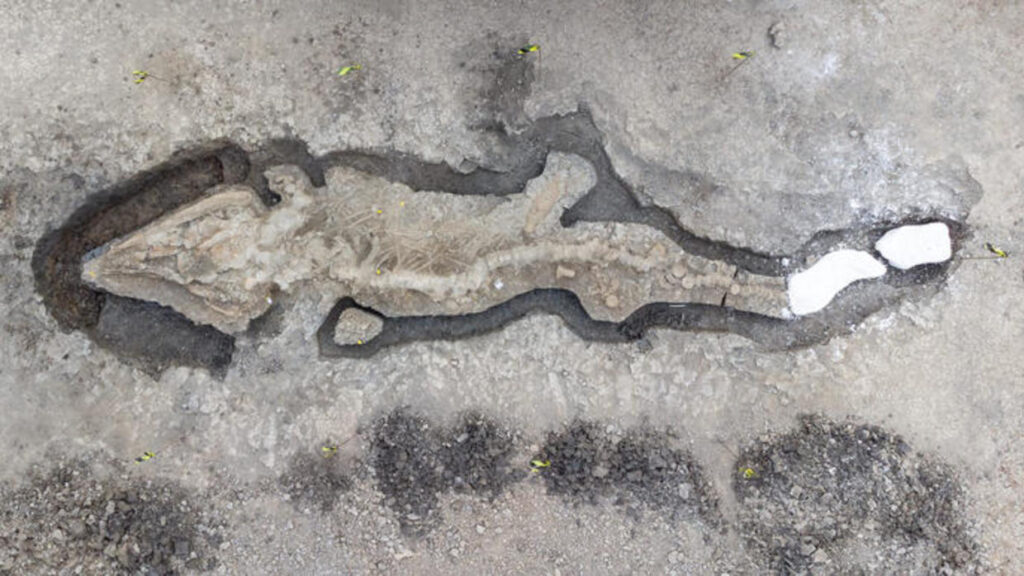 The colossal 180 million-year-old fossilized remains of an ichthyosaur have been found in the UK, in what researchers have described as one of the most significant discoveries in the region.

Discovered in a reservoir in the county of Rutland, in the English East Midlands, the specimen is the largest and most complete ichthyosaur fossil ever found in the UK, measuring nearly 33 feet in length and with a skull weighing one ton.

It is also thought to be the first of its particular species — Temnodontosaurus trigonodon — to be found in Britain.

The ichthyosaur was first uncovered in February last year in the Rutland Water Nature Reserve by Joe Davis, a conservation team leader from Leicestershire and Rutland Wildlife Trust, which operates the nature reserve in partnership with owner Anglian Water.

Davis was undertaking routine re-landscaping work, which involved draining the water in the lagoon when he spotted parts of vertebrae sticking out of the mud, the Leicestershire and Rutland Wildlife Trust said in a press release.
Then followed a large-scale excavation in August and September by a team of palaeontologists, led by Dean Lomax, an ichthyosaur expert and current visiting scientist at the University of Manchester.

“The size and the completeness together are what makes it truly exceptional,” Lomax told CNN, adding that previous finds of ichthyosaurs in the UK had been “nowhere near as complete and as large as this.”
Lomax said it was the complete large specimen — which he classified as being 10 or more meters in length — found globally. He said it was “a really fantastic discovery” as well as, for him, “a real career highlight.”

However, Lomax said the discovery was the “tip of the iceberg,” with much left to uncover of the specimen after chunks of rock have been cleared away, with the possibility that the ichthyosaur’s last meal may have been preserved or even that the reptile could have been pregnant.

“It was just mind-blowing,” Regan Harris, a spokeswoman for Anglian Water, told CNN. “I mean, you kind of couldn’t really believe your eyes when you were looking at it in front of you. But yeah, incredible.”

Harris, who was onsite for the excavation, said smaller ichthyosaurs had previously been found on the Rutland Water site, but the “sheer scale” and “well preserved” nature of this particular discovery made it unique.

Paul Barrett, Merit Researcher in the Earth Sciences Vertebrates and Anthropology Palaeobiology department at the Natural History Museum in London, said the Rutland ichthyosaur was “probably one of the largest fossil reptiles ever found, including dinosaurs.” Barrett was not involved in the find.

“It’s genuinely a really impressive, spectacular object,” Barrett told CNN. “Certainly one of the most impressive marine fossil discoveries from the UK that I can remember at least in the last 20 to 30 years or so.”

Barrett, whose work has covered dinosaurs and other extinct reptiles including ichthyosaurs, said the find confirmed the “cosmopolitanism” of the species, which had previously mainly been known in Germany.

The specimen is currently being treated by a specialist paleontological conservator, a process that will take 12-18 months. Following this, Harris said, the aim will be to put it on public display.

“We’re very proud of it, and I know the local community is as well,” she told CNN. “We very much want to bring it back home to Rutland and have it on display for people to enjoy.”

For Lomax, the lead researcher, one hope is to explore the Rutland Water site further, as six or seven vertebrae from other ichthyosaurs were also uncovered during the excavation.

He said the fact that “serendipitous things have happened to actually make this find” had not been lost on him.

“Honestly, it’s incredibly unusual,” Lomax told CNN. “Avid fossil hunters or palaeontologists, they can search their entire careers and never find anything quite like this, even when you know where you’re looking.”